I’ve just bought one Stepper Driver with the A4998 chip and immediately connected it as stated under the article details.
The driver gets its commands from an Arduino UNO R3, it powers a VEXTA Stepping Motor rated with 1.2A per phase.

The first few times it worked correctly and did what I expected. Then I unplugged everything and tried the Microstepping mode by pulling the MS1 pin to HIGH.
Unfortunately, when I connected everything again, absolutely nothing moved. I rechecked everything, and I became aware that the SMD LED on the Arduino that is programmed to shine whenever the Arduino sends a command to the driver is now only barely visible. Software settings are correct, the stepper works as it should and the current limit is also set correctly.
When I disconnect the driver from the Arduino and power the arduino naked, the led shines as bright as it should. Could this probably mean that I fried the chip and it is now drawing extremely much current like it is the case in a short circuit ?

I also measured the potential difference between the single pins on the driver board. What struck me was that the Voltmeter showed something like 4.8V between MS1 and Ground even though I connected nothing to the Microstepping pins, is this okay ? The other MS pins show close to zero volts.

Does anyone have an idea if I really fried the chip somehow or is there a chance to rescue my driver ?

I am sorry you have having problems with your A4988 stepper motor driver carrier. Could you post a diagram of your connections and some pictures of your setup that show all of your connections? What power supply are you using? Also, you say that the current limit is set correctly, but your stepper motor is rated for 1.2A per phase, while the A4988 can deliver around 1A per phase without additional cooling. Could you clarify what the current limit is set to? What voltage are you measuring at the VREF via (the one that is circled on the bottom silkscreen of the board)?

The connections are made exactly like in the diagram of the driver description: 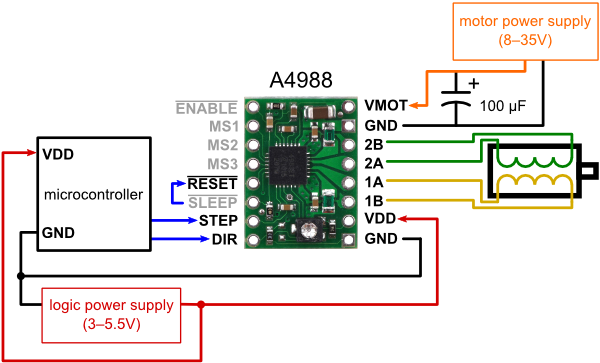 I am using a laboratory power supply that is set on 12VDC and connected to VMOT.

As for the logic power supply, I use the arduino’s 5V Out, step and dir are connected to Digital Out Pins.

At Vref, I measured 0,3825 Volts which would mean 0,96Amps current limitation. But now, after the driver did not work, I measure 0.6 Volts and this does not change even if I turn the current limiting pot.
Moreover, the normal average voltage of the arduino step and dir pulses are 2.5 to 4 Volts, but when I connect the faulty driver, the pulse voltage falls down to about 0.9Volts.

I think this driver is absolutely dead, nevertheless I would like to know what caused the driver to die so early in his life.

It sounds like your A4988 is probably damaged in some way. If you post some pictures of your actual setup that show how things were connected when it stopped working, I might be able to offer additional advice. Were you using a capacitor across VMOT and GND as shown in the minimal wiring diagram you posted?

Thank you for your fast replies.

I’m currently not at home so I am unable to post pictures, but the setup can be described as follows:

The pololu driver is sitting in a breadboard, on the one power rail is the laboratory power supply providing the 12VDC motor voltage, on the other rail is the 5V Logic voltage from the arduino.
The connections are made using standard jumper wires, the digital connections to the arduino pins using flexible jumper wires.
The Sleep and Reset pins are bridged using a small jumper.

I have connected a 100uF electrolytic capacitor as described in the minimal wiring diagram.

Do you need any additional information ?