A4988 Failure, Arduino Board No Light

I’m recently facing a strange issues that is similar to this previous post:

Hello ! I’ve just bought one Stepper Driver with the A4998 chip and immediately connected it as stated under the article details. The driver gets its commands from an Arduino UNO R3, it powers a VEXTA Stepping Motor rated with 1.2A per phase. The first few times it worked correctly and did what I expected. Then I unplugged everything and tried the Microstepping mode by pulling the MS1 pin to HIGH. Unfortunately, when I connected everything again, absolutely nothing moved. I rechecked everyth…

Everything was working fine for awhile, but then as I continued testing it (I made sure to give ample time for the driver to cool down before testing the rotation) the driver mysteriously failed. I had three drivers and each one began to fail and cause the same symptoms. I used the wiring diagram for the simple 2 input to arduino given on the website. Any clue what might have happened where? 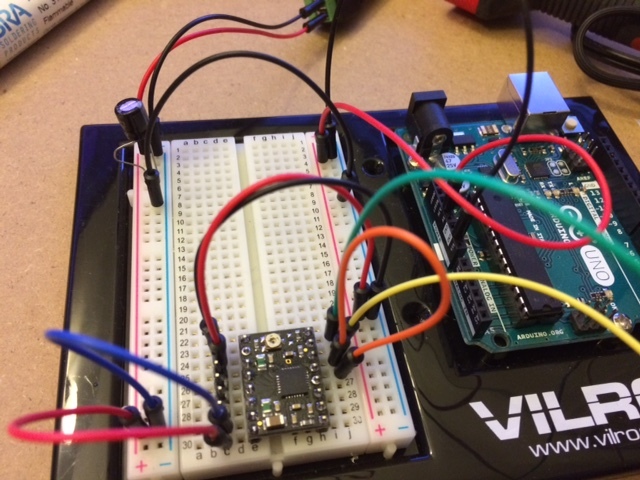 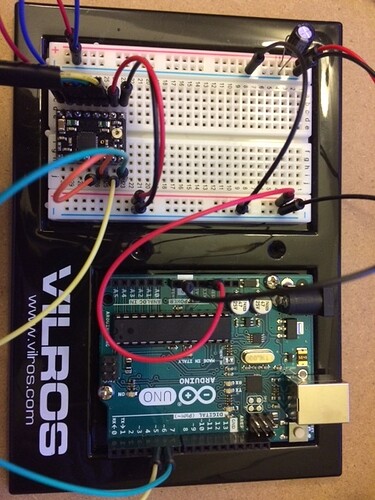 Thanks for the pictures. Your connections look okay. What did you set your current limit to? What are the specifications for your stepper motor?

I set the current limit to around 0.520 for these steppers:

What does 0.520 mean? Is that the Vref voltage or the current limit you set?

It is possible you might be stressing the stepper motor drivers since they only have a continuous current rating of 1.2A and you are using them with a current limit of 1.3A. Could you tell me more details about what is happening when the driver fails? Is the driver permanently damaged, or does the driver work again if you let it cool down? Could you also tell me what voltage you are supplying to the stepper motor driver?

The drivers seem to work fine after I run the code but I never did a run more than about 10 seconds. I turn off the arduino board first then disconnect the power to the driver. When I try to start it up again, there is no power to the arduino until I disconnect it from the stepper driver. The steppers are powered with a 12v 2A power supply. Sadly I think the drivers are permenantly damaged because I tried running it again with no luck. If I turned down the current limit to 1A do you think I could still continue to use these drivers? Or would it be at least safer to try? Thanks for the help so far.

I do not see anything obviously wrong with your setup, so I am not sure what caused the damage. Could you post close-up pictures of the component sides of some of the boards that are not working so I can look for signs of damage? How many stepper motor drivers do you have and how any are not working? If you try again with another board, it would probably be good to limit the current to 1A to help rule out overheating issues. It would also be good to move the electrolytic capacitor that you have on the power rails of your breadboard as close as possible to the VMOT and GND pins on the A4988 carrier, since that will make it most effective at protecting the driver from LC voltage spikes.

Here’s a close shot of the drivers, I hope the image clarity is sufficient. I have three stepper drivers and they are now unfortunately all not working. I did set the vref for all the boards at .5ish so that might be my issue. I did order some more and I will set the current limit to 1.0 or less for testing. I’ll also change the set up when the boards arrive to rule out the capacitor issue. Are there any other issues that could cause this problem where the arduino board no longer draws power when the board fails? It’s just puzzling that the driver would work but then after a few tries it dies. I did put my finger on the driver to check the heat and it didn’t seem too hot compared to most chip components. 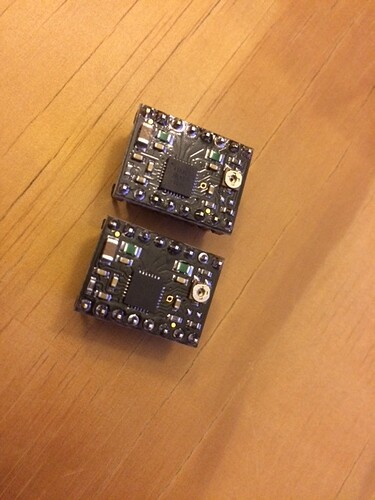 I did not see any signs of damage in the pictures; at this point I am still not sure what is causing your stepper motor drivers to become damaged. Since so many units have become damaged, I am suspicious that an issue in your setup is the cause, so I recommend double checking everything, and possible even taking your whole breadboard setup apart and redoing it. Also, before you try the new drivers, you might want to test your Arduino to make sure the pins are not damaged. It sounds like you already ordered new A4988 carriers, but in the future you might want to switch to the DRV8825 stepper motor driver since the DRV8825 can often be used as a drop-in replacement for the A4988 and can supply more current than the A4988.

Thanks for the helps so far, I will update the thread when the new drivers arrive to give it another test. I will also look into trying out the DRV8825 since it can be dropped in to the set up.

After a full rewiring and check I dropped the vref to about 0.412 to hit a target current limit at around 1.0 I found this seemed to have made all the difference and I’m not have any issues running the stepper anymore. I would put my previous problem in the category of over heating or burning out the chips but I’m not totally sure as there wasn’t and obvious damage to the boards. Hope this helps anyone in the future.

I am glad the new stepper motor drivers are working for you. Thanks for letting me know.