Have two Zumos Robots with Shields 1.2 on both. Have connected two 3.7V LiPo in series to the Charge connector (with no internal batteries) to both and they have been working nicely since the modification (last year).

Yesterday, something odd happened to one of the robots:

With power button OFF and without any Arduino connected:
As soon I connect the LiPo batteries to the charge connector:
[ul] - the two LEDs (red and blue) next to the (-) battery connector (in the right bottom side of the shield), will slowly power up (~2 seconds)

Can you help me identify the problem? ^_^’

Thank you very much.
…Fred

The 3 LEDs you mentioned are on VIN, which is supplied from a regulator on the Zumo shield. The VBAT you measured is after the reverse voltage protection and power switch. It looks like somehow a small amount of power is getting through and partially powering the regulator, which cannot quite output the 7.5V it is supposed to but is getting up to 6.3V. I suspect there are bad or poorly connected components (possibly Q2, R5, or R7 as labeled on the schematic found under the “Resources” tab of the Zumo shield’s product page).

We would like to look into this a bit more; could you send us an email with your order information (at support@pololu.com) that references this post?

I’ve got a similar issue. Is there a way of knowing where Q2, R5 and R7 are located on the board?

The schematic does not show where on the shield they are.

What is the issue you are seeing? Are you also powering your Zumo from an external battery and not using the intended 4-AA batteries? I noticed you have a couple other forum posts (e.g. this reflectance sensor post and this gyro post) discussing problems you have been having; if you are powering the Zumo with some alternative method like this, it could be relevant for your other forum posts as well.

The issue I am seeing is that I have power reaching the shield as soon as I put batteries in. But the LEDs aren’t at full brightness till I turn on the switch.

I am using the onboard 4 cell battery bank, not an external source. The external power source is for the Arduino only; which is via the computer’s USB cable.

It sounds like you have the Arduino connected to a computer via USB. If that is the case, I suspect what you are seeing is normal. As mentioned under the “Power” heading of the “Features and components” section of the Zumo Shield’s user’s guide, when the Arduino is connected to a computer via USB, it will receive power (and supply 5V and 3.3V to the shield) even when the Zumo Shield’s power is off.

Just to clarify, the original poster was seeing his Zumo power up when he connected his external battery when the power switch was off, even when no Arduino was connected at all.

There is no power source other than the 4 onboard batteries which is why I think there is a problem.

It makes sense if the components you listed above were faulty and was wondering if there was some way of confirming that.

Last time, Brandon provide me with the attached picture. With that, I’ve replaced Q2 with a new one. This is a mosfet, I’ve used successfully the DMP2035UVT (also suggested by Brandon). Q1 is used for reverse voltage protection.

After that my Zumo was fixed.

Hope that might help you to sort the problem.

I’ve got a similar issue. Is there a way of knowing where Q2, R5 and R7 are located on the board?

The schematic does not show where on the shield they are. 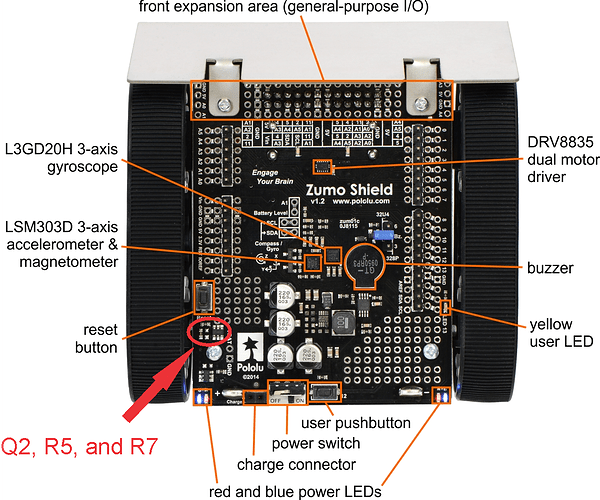 There is a warning that you can’t have external power supply to the Arduino while also powering it via the Zumo. It only mentions VIN and the power jack, so does it mean that it is safe to connect USB?

Thanks heaps for that.

I believe that was indeed the issue. I swapped the Shield with another one and the unexpected power problem goes away. The Shield now turns off when it should.

I didn’t change out the transistors so I can’t confirm which one exactly caused the problem, but atleast now I know what to do.

Thanks for assisting in resolving this issue.

I am glad you were able to fix the problem; thank you for letting us know.

Powering the Arduino through the USB while it is powered through by the Zumo is fine. The warning in the section I linked to in my previous post is explaining that connecting another power supply to the Arduino’s power jack or VIN pin will short it to the shield’s power supply, which can cause problems and potentially damage both boards.

By the way, I noticed that you mentioned in one of your other posts in a different thread that your Zumo’s VIN pin has not been soldered in and you are powering the Arduino separately. I do not see any indication of this from your posts in this thread, but it would have been helpful for troubleshooting. In the future, I suggest trying to give as much information about your setup as possible when asking for troubleshooting advice, especially if you are doing something particularly different than the standard configuration.