Today is our Day 1 of using Zumo (we bought assembled Zumo).
We followed the instructions on how to connect Zumo to our Macbook and how to upload sketches to Arduino IDE. In the beginning, everything looked fine. The sketches we uploaded are from Arduino>File>Examples>01.Basics, like Blink, DigitalSerial and after we uploaded Fade something strange happened, 8 black squares appeared on the screen and motor that moves wheels on one side of the robot started running, so robot started to rotate.
Then we switched it off, removed the cable and even tried to take the batteries out, but the black squares were still on the screen. 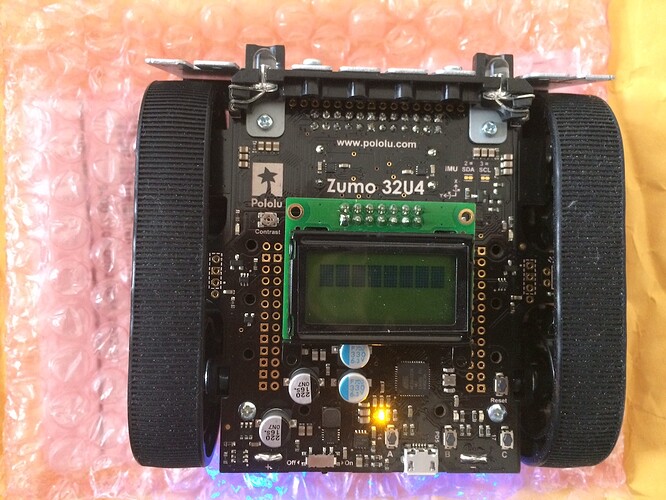 The Zumo dedicates some pins for specific functions; in this case pin 9 (which used in the Fade sketch) is connected to the Zumo 32U4’s right motor PWM control, so your symptoms are what we expect. I suggest sticking to the examples in the Zumo32U4 library to avoid conflicts like that. If you need to use some other example, you can check for conflicts with the Zumos pin in the “Pin assignments” section of the Zumo 32U4 robot’s user’s guide, and then change the pins used in your example to something not used or that can be disabled with the Zumos jumper pins.

You can test your LCD to make sure it is still working with the “LCDBasics” example from the Zumo 32U4 Arduino library. 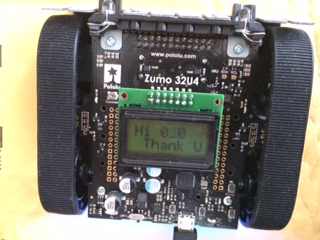