I am using 2x single VNH5019 Motor Driver Carriers on a 4x4 skid steer bot driven by a Raspberry Pi.

Problem is that randomly 1 or both controller will stop working whilst being driven until I drive the bot in opposite direction, then it starts the controllers power on again.

Each carrier drives 2x 12v motors (12V-1000RPM-Mini-Torque-Gear-Box-Motor-Hobby-DC). Each driver should easily be able to manage 2 linked motors and I’m using a 1500mah 3s LiPo which also has more than enough juice to drive them.

I’m PWM’ing the controllers from 0 → 90% duty cycle using python wrapper to the GPIO pins, and for the most part it works, but if driven for more than a second or so, one side will cut out and will not drive again until its INA and INB are inverted. (usually the left, but not always).

I’ve inspected soldering, all appears fine. No obvious visual difference between sides and all appears to be making good contact.

I initially thought it might be electrical noise from motors, but I have capacitored all 4 motors as suggested in a pololu online help document.

Any suggestions as time is of the essence. Have a Piwars competition in just over 2 weeks and need this working. 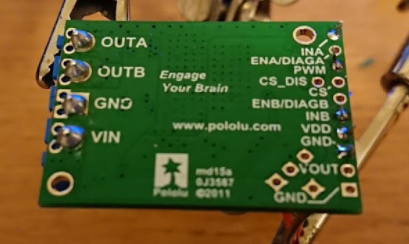 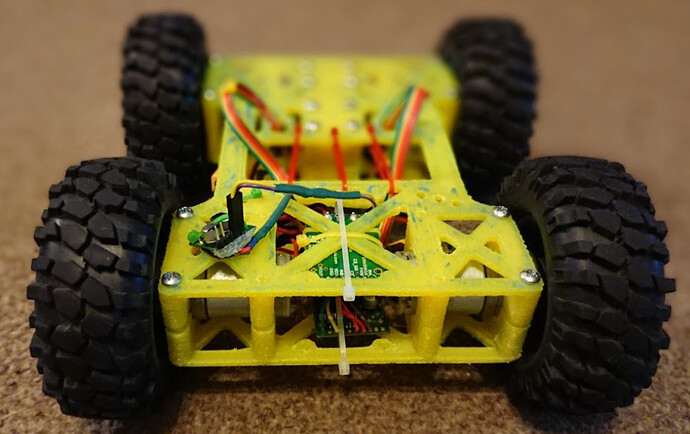 I am sorry you are having issues with your VNH5019 motor drivers. It looks like the soldered joints on the input and output of your board are not completely wetted, which is something that could cause an issue like this. Can you try touching up your solder joints? I recommend referring to this Adafruit guide for what an ideal solder joint looks like.

If you are still having issues after touching up those joints, can you try running a single motor per motor driver and see if you get the same behavior?

Thank you for getting back to me. As soon as I posted that photo, I realised that it was taken before I re-soldered those joints as I had noticed that myself.

I have been forced to purchase 2 more controllers as “backup”. This is in part down to the deadline that if one is faulty I would need time to get it ordered and delivered.

I will add that I removed the motors and tested that way. Worked absolutely fine. Only starts to fail when a motor is added. Didn’t matter which one (of the left).

Could you post updated pictures with your redone soldering? Also, what is the stall current of those motors? Do you have a link to their specifications?

I will add that I removed the motors and tested that way. Worked absolutely fine. Only starts to fail when a motor is added. Didn’t matter which one (of the left).

Can you clarify what you tested here? It sounds like you are saying it worked fine when no motors were connected; how was this verified? Also, does it still cut out when only 1 motor is connected to the board (instead of paralleling two of them)?