Recently purchased 2x Tic T825 to control Nema 17 Stepper motors via Raspberry PI. I’m in awe, how well these controllers work: seamless integration, easy-to-understand libraries, etc. and was able to get the robot running within a couple days.

Been testing the actuators/robot for about 2-3 working hours and suddenly one of the Tic 825 suddenly stopped registering on Raspberry PI (error popped up: “Device ID: ######” is not connected) so upon a closer look at the LEDs one of the two Tic controller didn’t light up. I measured the voltage of across the wire terminals and registered 12V (both controllers were running parallel on the external power supply).

I removed the T825 that is having issues from the robot and plugged it directly into my computer via USB but nothing was turning on (no LED lights and doesn’t show on Tic Control Center). Just to make sure, I did it with the other Tic Controller but everything was working on this one. I’m a bit perplexed why one controller stopped working while the other controller was working just fine.

What can I do to verify the T825 circuit and if it got fried/manufacturing defect? and if there is potential to fix it?

From your description, I do not have any obvious leads as to what went wrong. Just to clarify, if you disconnect everything from the Tic, and just connect the USB to your computer, do you see any signs of life from the Tic (e,g, LEDs blinking, registering in the computer’s Device Manager)? If not, could you try measuring the voltage on the 5V(out) pin? You could also try a different USB cable just in case something went wrong with the one it was using.

Did you notice anything suspicious when the Tic stopped responding (e.g. a burning smell, the board getting hot or letting out smoke, an electrostatic zap, the USB cable being pulled on)? Also, could you post some pictures of how everything was set up, as well as some close-up pictures of both sides of the problematic board?

Attached is the setup I’ve been working with:
Front: 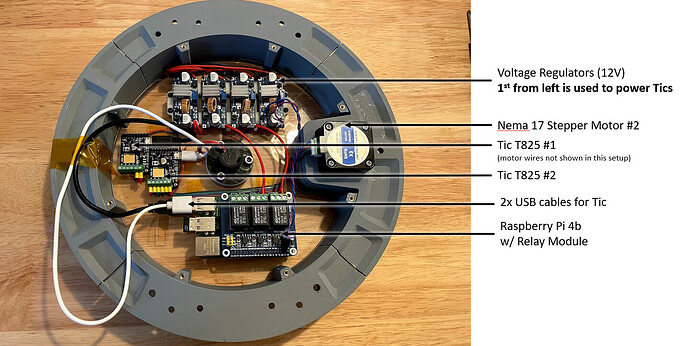 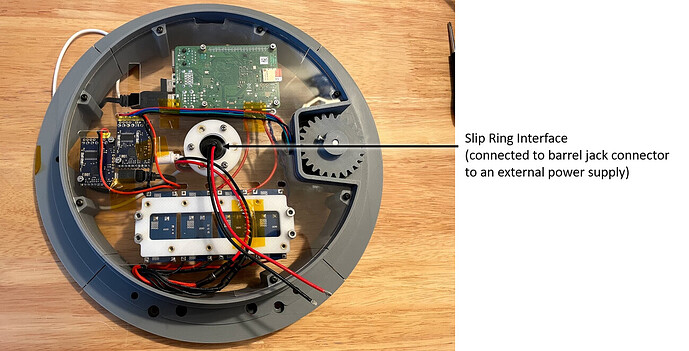 And I’ll refer to the non-functional Tic Controller as T825 #1. I removed the wires for troubleshooting but they are setup just like T825 #2.
Front: 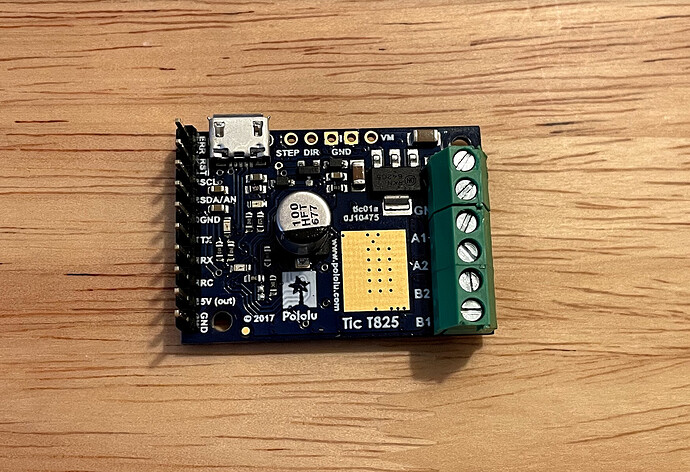 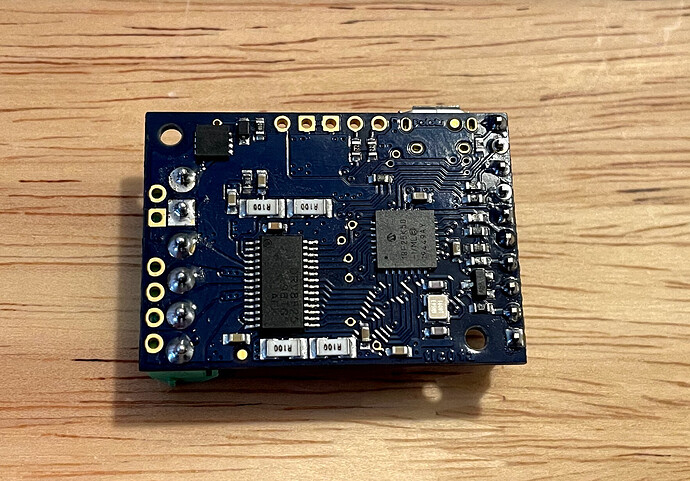 Just to clarify, if you disconnect everything from the Tic, and just connect the USB to your computer, do you see any signs of life from the Tic (e,g, LEDs blinking, registering in the computer’s Device Manager)?

Correct. I tested different cables with both Tic Controllers #1 and #2. But only #1 seems to be having the problem. Tic#2 was working fine.

Did you notice anything suspicious when the Tic stopped responding (e.g. a burning smell, the board getting hot or letting out smoke, an electrostatic zap, the USB cable being pulled on)?
Blockquote

I haven’t. I was running the system on and off for about a couple hours but haven’t touched any of the circuits (had a ESD band on). Didn’t smell anything burning and the motors were cold to touch (typically get a luke warm).

Just some of my notes,

Thank you for all the additional information. Sorry for the delayed response. I do not see anything obviously concerning with your setup or any visual signs of damage on the board. Without any clear indication of what particular components are damaged, and with the Tic showing no signs of life, it is hard to determine what might have gone wrong. Did you ever disconnect the motor from the Tic while it was energized?

If you would like to try again with another Tic, please email us at support@pololu.com with your order information and a reference to this post and we should be able to help you out with a replacement.

I am also having a problem with the T825 connected to my Raspberry Pi 4 (updated with latest Raspian OS). It works perfectly connected via the USB but not with I2C. The T825 is detected by the I2C scan at the correct location (14) from the command prompt and when I list I2C devices:

I have followed all of the recommendations to the I2C setup in /boot/config.txt in the guidebook and the forum but running the C Example 12.8 (Pololu - 12.8. Example I²C code for Linux in C) gives:

Both programs appear to be looking for /dev/i2c-3 and not finding it (because it isn’t there).

It looks like Amanda is already helping you with this in the thread you created. Please keep posts related to the same topic within the same thread. You can continuing the discussion by posting answers to her questions there.

Don’t you need a level shifter between the Raspbarry Pi and the Tic. The Tic is a 5V device, the Raspberry Pi 3.3V.

I know I have to use a level shifter in my application (RasPi->Tic) using serial.