I have built a Self-Balancing robot too using two 100:1 micrometal motors. They died while I was adjusting the PID. I believe too much current was passing through them when switching the rotating direction (too much P maybe). They are “locked” (cannot rotate anymore) so I thought that it was the gears but they seem to be alright. The motor driver still works. As you can see in the picture there is not a lot of weight (the chassis is the board itself). Any advice? Should I get other motors? The design was made for the micrometal form factor. 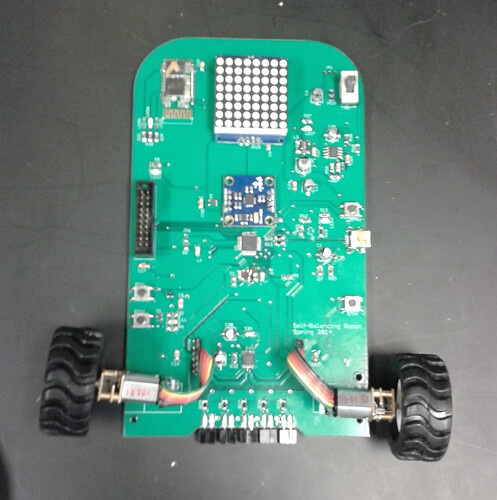 I have moved your post to its own thread.

When a motor switches from going full speed in one direction to full speed in the other direction (which is not unusual for a balancing robot), the motor could draw upwards of twice its stall current. Could you try removing the gearbox to see if it spins freely without the motor attached (as it should)? If it does, could you open the backside of the motor to see what caused the problem? If there was too much current going through the motor, you might notice some melted plastic pieces inside the casing or damaged brushes.

[quote]As you can see in the picture there is not a lot of weight (the chassis is the board itself).[/quote]The motor on the left side of the picture looks like its mounting has bent or been twisted. How are the motors attached to the board?

I removed the gearboxes and they spin freely. Surprisingly the motor shaft also does but not smoothly. So definitely something melted inside. I will take them apart to determine exactly what it is, I have to take the encoders off first.
In any case, what would be the solution? Could it be solved by implementing code? or is it a mechanical bottleneck? (using micrometal motors).
I am deciding whether or not I should purchase another pair of motors. Maybe I should use the white (extended brackets).

To Jim:
The brackets were removed, but I use Pololu’s to attach the motors. 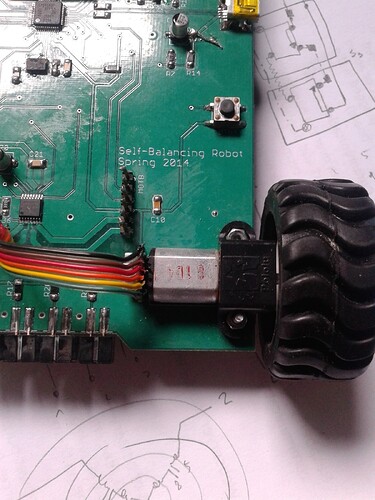 Typically, to limit the in-rush current like this, you could try implementing some sort of acceleration ramping; however, since you are building a balancing robot, this might not be an option because you probably need many small quick movements to stay stable. I do not think switching out your bracket for the extended version would do much to help the situation. Since your robot is built for the form factor of our micro metal gearmotors, you might try switching your high-power gearmotors to one of the medium-power or low-power versions. Because of their lower stall current, I do not expect these versions to produce as much heat as the high-power micro metal gearmotors.

In general, the higher power motors can be subjected to higher mechanical and electrical stresses that can adversely affect their lifespans, but if you keep the load to under 20% or 30% of the stall torque and limit accelerations, I expect the lifespan to be comparable to that of the lower power motors (though this is not something we have specifically characterized). The low power motors are probably going to be a little more forgiving if you are using them roughly, though (e.g. in applications like yours where the motor is often drawing near or at the stall current of the motor).