Have you found the documentation of the Wixel SDK online?
pololu.github.com/wixel-sdk/
It explains all the external libraries/functions that the wireless serial app uses. What would be most relevant to you is the documentation of the radio_com library, which lets you send bytes wirelessly between two Wixels. Or you could use the lower-level radio_link library which gives you more control over the packets that are sent but can be more difficult to use.

The tasks your code has to take care of are:

Step 1 might be the hardest for you. The Memsic 2125’s output is a 100 Hz PWM signal. We don’t have any libraries available for measuring pulse widths on the Wixel, but you might be able to use Timer 1’s capture feature to do it if you read the CC2511 datasheet. Alternatively, you could get one of the accelerometer boards we sell that has an analog or I2C output. The Wixel already has libraries for doing analog and I2C communication. Analog would be the easiest choice in terms of coding because you just need to call one function (analogRead) to read the output.

Let me know if you need further help with any of these steps.

Thank you so much for the assistance. I decided to get analog accelerometers to make the program simpler. In which library is the analogRead function?

Oops, the name of the function is actually adcRead and it is in the Wixel’s adc library:
pololu.github.com/wixel-sdk/adc_8h.html

You need to implement the putchar() function in your program for printf to work. To print to the virtual COM port, this can be as simple as calling usbComTxSendByte():

You can see the source for the radio_sniffer app for an example of printf being used in this way, and yes, you would use PuTTY or another terminal program to connect to the virtual COM port and view the output.

Sometimes Eclipse will flag the “#include <stdio.h>” line simply because it does not know where stdio.h is, but the app will still compile fine because SDCC knows where it is. If the “error” indicated by Eclipse bothers you, I think you can fix this by adding the SDCC include directory to Eclipse’s include path; to do this:

When you are done, it should look like the screenshot below. 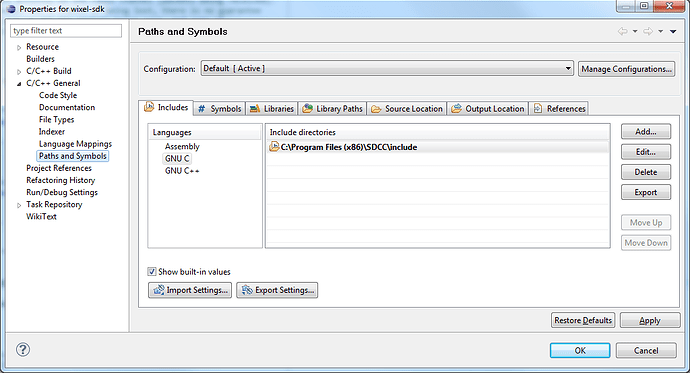 I’m still having trouble getting this to work. The radio sniffer program is confusing to me. I used Putty with the COM port listed in the Wixel configuration utility. This was my attempt:

I copied the example blink LED app folder and renamed it “robot_project” and renamed the c file “accelerometer_test.c” and compiled it. The wixel app file still has the example blink LED name. I’m not sure if this is correct so I attached the image of the project explorer window. Also how do you set the parameters that are shown in the Wixel configuration utility? I don’t see baud rate. It still shows the LED program’s parameter. 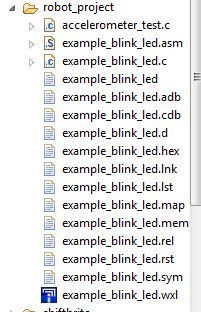 I’d change your printf statement to

also
remove the putchar from your main loop - not needed!

finally change your adcRead to

mmcp42’s suggestions are good. Your printf statement won’t work at all the way you have it currently and its good to just read P0_0 with VDD as the reference for now until you get things working. You should remove your call putchar() with no arguments (that should be a compiler error because you supplied no arguments). Also you are overlooking one very important thing about usbComTxSendByte: please read the documentation of usbComTxSendByte and/or look more carefully at the example apps:
pololu.github.com/wixel-sdk/usb_ … 348f4eb8c1

It looks like you are having trouble compiling and Eclipse is showing you old files that don’t exist any more. You said you renamed example_blink_led.c so why do we see that in the list? You can try pressing F5 to refresh Eclipse’s view. Please try this: run “make clean”, remove all files from your app directory except accelerometer_test.c, then run “make”. That should compile apps/robot_project/robot_project.wxl. Please inspect the directory using Windows Explorer, not Eclipse, because the list of files displayed by Eclipse can be out of date.

Thank you for the suggestions. It gives me an error after I compile that says there are two or more data types in the putchar declaration. I’m not sure what’s wrong. This is my code:

I put “putchar(‘avalue’)” after readaccel() and it still didn’t work. If putchar isn’t needed in Main, I don’t understand how it’s used.

ah
couple of things I would change
a) instead of using avalue as a global, change your readaccel function to return a value:

b) your putchar routine is looking for at least 128 bytes of buffer before it does anything
you only need 1 as I understand it!

can you show the compile error you get…

Thank you, I followed your suggestions. However I’m still getting an error:

and an app file isn’t created after I “Build All”.

yeah I get that sometimes
fix seems to be to delete all the “odds and sods” files (xxx.d, xxx.a etc)
i.e. anything that isn’t xxx.c!
then try again

Could you please type make -v in a Command Prompt and post the output here?

This is the output after typing “make -v”:

After deleting the .adb and .d files and compiling again, an app file was created. I wrote it to the Wixel using the configuration utility. I used Putty to see the output which should have shown accelerometer data. Nothing appeared. I tried building again and got the “make: Interrupt/Exception caught (code = 0xc0000005, addr = 0x0x416638)” message again (not sure if that was supposed to happen).

The “Interrupt/Exception caught” message from make is definitely an error. I would like to work with you and mmcp42 to debug it create a new version of make, but you would probably prefer to get your actual application working first, so let’s do that. Please post your entire Wixel app code here again so we can see if there are any remaining bugs.

For now, as a workaround to the bug in make, try compiling your app by typing one of the commands (whichever one doesn’t crash):

Thank you. This is the code:

I just tried that and I’m still not getting anything output in the Putty terminal window…in Putty the baud rate is set to 9600. I’m not sure if this could be the problem and how I would find the correct baud rate.