Hello,
Last year I purchased the Dagu Wilder Thumper and Qik2s12v10 from pololu. However, since then I have been unable to get the thing to work properly. I believe that there must be some fault with the motors. All motors and necessary connections are in place and are being powered by 2 7.2v Tenergy High Power Battery Packs. I don’t believe the power is the issue as these packs are rated to provide ~50amps each. I also purchased Pololu’s Battery Balancer (the 34.95 one). When I put the Qik2s12v10 into DEMO mode, I get an initial voltage drop of about 1v. When it comes to the current, weird things happen…the current flickers from about 6A to the screen of the watt meter turning off and then back on again. This leads me to believe that there is some kind of motor short. Also, the consequence of whatever is going on is that this chassis is basically useless. it only goes straight, wont turn on any surface. Below is a link to a YouTube video I made showing the uselessness of the chassis as it is right now.

Can you tell me how you have your two battery packs connected? Do the motors turn as expected if you hold the chassis in the air?

Have you made sure that your batteries are well charged? I have had a similar experience testing a Wild Thumper chassis with a battery pack that measured close to 7.2 V with no load, but it was actually significantly discharged and could barely move the chassis. Once I charged the battery, it performed much better.

Ben:
The two batteries have the original ends cut of of them, red is with red and black is with black, these ends are then jumpered with a short cable to the battery balancer part, from there directly to the Qik. All connections are kept together with those large electrician screw on nut things. I can solder everything together if you think those connections aren’t sufficient.

Kevin:
Yes, the batteries were charge up completely. Well as far as I am able to tell. I am using the following charger and settings: (I attached the picture below) 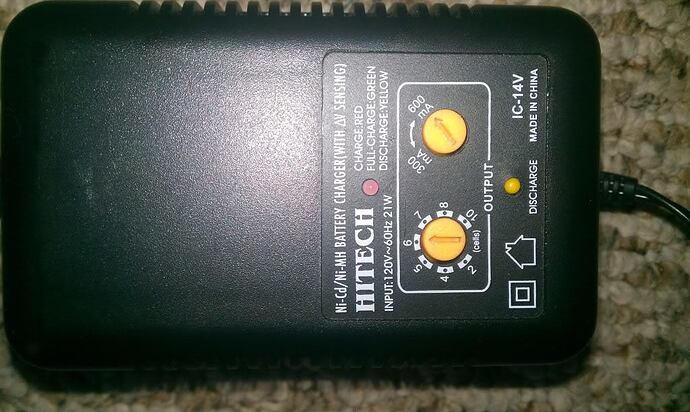 So just to be clear, are you saying that you have your two batteries connected in parallel? How old are your batteries? Can you disconnect one of your batteries from everything and measure its voltage? If you simplify everything and just use a single, freshly charged battery without the balancer, is the behavior the same? Does it work properly if you hold it in the air so the wheels can spin freely?

Yes i have the two batteries connected in parallel. The batteries are brand new. I just tested using only one freshly charged battery pack at a time and had the same problem. If I hold it in the air, the wheels do spin but I’m not really sure how fast they should be spinning.

Can you disconnect one of your batteries from everything and measure its voltage? By the way, what is the gear ratio of your Wild Thumper?

I don’t understand your range. I’m expecting you to see a fairly constant number if you look at the battery voltage with your multimeter. Can you give me the actual number you see for each pack?

Can you try to take the same measurement again while using a single battery to power the qik in demo mode? Specifically, I would like to see if the battery voltage drops by a lot when the motors are stalled.

I was able to do that. They were at 8.1v then dropped to a lowest of 7.2 for the duration of the DEMO mode of the Qik.

That makes it sound like your battery packs are indeed good, and it doesn’t sound to me like there is a problem with the motor controller or the motors. In general, the Wild Thumper is not good at turning in place, especially on carpeted or other high-friction surfaces, and I think it is probably what you’re seeing. There is a lot of friction on the wheels when the chassis is trying to spin like that, which can stall the motors and lead to the kind of behavior you are observing. This is more likely to happen on the 34:1 version since it uses higher-speed/lower-torque motors. The solution is to use the chassis on a surface that doesn’t have that level of friction, such as uneven terrain or gravel, or to make more gradual turns (i.e. like a car might turn).

You should also note that the qik’s demo mode is not a good way to test the performance of the chassis. It is intended solely as quick way to make sure that the motor driver is functional, but it is not necessarily causing the controller to output motor sequences that will work well on an arbitrary chassis. Can you try making the chassis do something else involving more gradual turns and see if it works better?