I’m having power issues with the Maestro controller when i have servos that have a Load on them. If I dont have enough AA batteries the Maestro doesnt work and gives me a red light. However, adding more AA batteries the servos move the load, are noisy, and shake/vibrate. This is very frustrating when i use it for multiple projects that have a different # of servos and different loads.

Is there any way to reduce the shaking/vibrating and noise powering these servos?

I moved your post to the “Servo controllers and servos” section of the forum since it seemed more appropriate.

Can you post more details about your setup? Which Maestro controller are you using? How many servos are you using and what servo model are they? What kind of batteries are you using? Have you checked that they fresh or fully-charged (e.g. what voltage are they measuring with no load on them)?

By the way, most standard servos are rated for 4.8-6V nominal, so 6x AA batteries is probably a little higher than the recommended operating voltage, as it would be between 7.2V and 9V depending on the type of battery you are using.

I’m a beginner in all this, but here’s my take on it. I think that–even though the Maestro controller is designed to smooth out issues like you’re talking about (ramp up/ramp down) you’re overloading the capabilities of the controller in such a way that it’s causing a kind of oscillation ring back. I would compare it to what might happen if you tried pulling a heavy trailer with a Prius: you might get somewhere, but not without some issues.

The reason I think this is happening can be explained in this tutorial about servo motors. It’s about a different kind of control than the Maestro, but I hope it’ll still be helpful.

Good luck with your build.
M

I’m using the Mini Maestro 12 servo controller to move 4 servos. 1 of the 4 servos has a load of 0.3lb on it. (torque= 0.3lb x 4"). The other servos don’t have much load. The servo with the large load is an HS series servo, which is capable of handling the torque required.

I should note that I’m powering the Maestro processor and the servos with the same power supply. The instructions manual pdf says you can do this since the board can handle 5-16V.

My original thought process:
The servos should only consume what they need so it would be no problem to use a 6xAA battery pack… But too high of voltage seems to be the issue.

New idea I may try:
Power the Maestro+Servos with 2, 4xAA battery packs in parallel. That way I maintain the 5.5-6V range for the servos and have plenty of mAh (current). 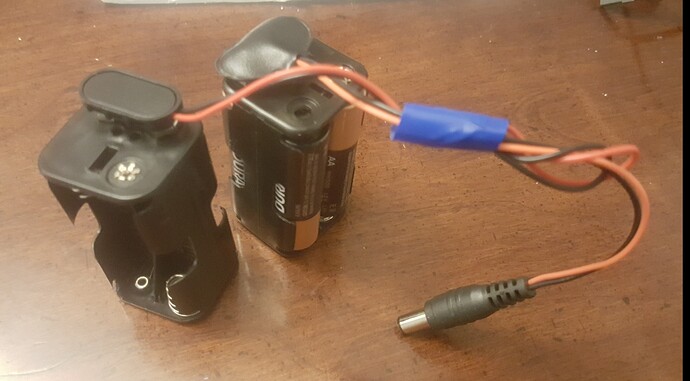 Thank you for the additional information.

We generally do not recommend putting batteries in parallel unless you really know what you are doing.

From a brief internet search, it looks like those HS-645MG high-torque servos can draw upwards of 2.5A each, which is relatively high for those Alkaline batteries. There are several ways to address this, but you might try switching to rechargable NiMH AA batteries first, which can typically handle higher current draw.

Another option you might consider is switching to a 2S LiPo battery, which are often used in hobby projects for their compact size and ability to deliver much more current than Alkaline or NiMH.

Alternatively, if you do not need the setup to be portable, you might consider using a wall power adapter, such as this 5V, 5A one.

There is also the option of powering the system from multiple power supplies to reduce the current draw on each one. Aside from powering the Maestro separately from the servos (which you can find information about in the “Powering the Maestro” section of the user’s guide), you can also separate the servo power rail on the 12-channel Maestro into two smaller power banks by cutting a trance on the underside of the board. This post has additional information about doing that.

I have been able to power 10 servos using the 5V 5A alone. Interestingly, i can run all 12 servos with the battery pack (5V 5A) and programming usb connected. I figured this was a current issue so i purchased a 5V 15A to see if i could run all 12 servos on the battery pack alone… this did not work… my usb port shouldnt be anything special other than a 5V .50 A output.

Without the usb connected the program does run with 12 servos until multiple servos start to run. Then maestro goes error red light.

Any ideas what could be the issue?

Also, what would be the best baud rate to use?

So im still having the issue… here is a video of showing the 5v15a hooked up with and without the usb programming cable.

Could you look at your supply voltage with an oscilloscope to see how much it is dipping when there is a sudden change in current draw? From your description and video, it looks like moving your servos all at once is causing the supply voltage to dip low enough to brown-out the Maestro. Note that 5V is the minimum operating voltage of the Maestro, so you do not have any buffer to tolerate spikes.

There are a few things you could try to help reduce the spikes; if your application allows for it, you could avoid moving many servos at once. Using acceleration or speed limits (which can be configured for each channel in the “Channel Settings” tab) can also help to dramatically reduce the current spike caused by the motor moving full speed from a resting state. You could also try adding some capacitance to your servo power rail to help with the sudden current spikes and help stabilize the operating voltage.

Another option could be to power your Maestro logic power from a separate supply, which is shown in the “Two power supplies” heading of the “Powering the Maestro” section of the Maestro user’s guide I linked to in my previous post.

Thank you for the help. I powered the Maestro micro controller off of 9V 1A power supply. Also, Powered servos off of separate power supply of 5V 5A and it works like a charm.