The page says that they can run in the range of 6-9 volts so I powered them with around 8,5-9 volts in order to get more performace.

You can see a video comparison of 6 volts working and 8,5 volts working, both of them filmed before the problem 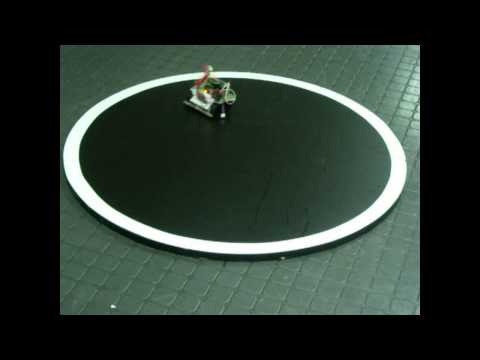 Some days after that (were I tested the robot at constant 8,5v) three out of the four motors stopped working during a testing. I noticed they had some heat touching them with my finger.

I concluded they were broken and checked what happened inside them: 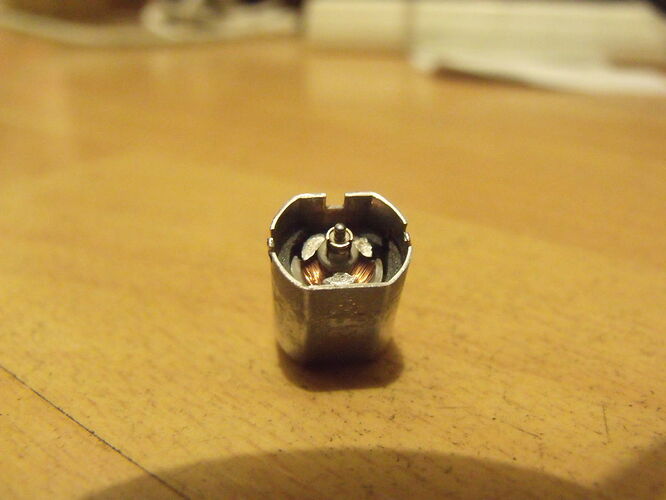 A little packing ring was detached from the motor, I think maybe because of heat, the gearbox stage though, survived. I think that the heat was the problem and not the torque because of that (also the robot was not stalled when they stopped working)

The important detail here is the PWM I used, that was around 1khz, maybe less because it was made without pic18f4550 pwm (that was used for generating 38khz for the IR sensors), and in the normal program (a counter variable going from 0 to 10, and checking if the variable was lower than the speed to decide motor status), and also I was using two lipo 7,4v connected in series (getting a total of 14,8 volts, reduced by the l298 H-bridge to nominal value of 8,5, but with 1khz frequency, I’ve seen people in the internet using up to 20 khz motor freq).
Also that time I didn’t use l298n protecting diodes but yes a 104 ceramic capacitor around the motor poles.

Because of that currently my robot uses nominal voltage of 6v in that pwm that reduces from 7,4v to 6v (but as the l298n H-bridge has around 1v drop, my robot in 100% speed has no pwm at all (100% duty cycle equals to almost 6v motor power)

I have lot of questions, for example, if I use a higher frequency, that makes motor to handle better high voltage and extend motor lifetime?), Can I use 13,8volt of pwm peak voltage but nominal 6v, what damage the motor, the peak of 13.8v or the nominal? The frequency determines that?
If I use LiPo 11.1v (10v with l298n 1v drop) instead of two 7,4 volt, and reduce it with pwm to 6 volt (maybe only 7-8-9v for a second only) I extend motors life time?
Can I use low frequency (500-1000 hz), or in order to protect motors and assure they won’t break I must use higher frequencies?
If I use l298n protecting diodes circuit, 4tronix.co.uk/arduino/pictur … dge_02.jpg will I get improvements?

Also I have another question about robot traction. I am currently using four solarbotics high traction wheels pololu.com/product/642. I noticed they start to turn in the air if the push more than their maximum traction. In order to improve traction I clean them with alcohol from time to time. Is valid if I say that using that high torque motor has no sense because the wheels traction limitation? So It’s better to switch to lower gear ratios because the higher torque can not improve robot effective push? (so preferable more speed). I changed the robot to two 1:50 motors and four 1:30 motors separately and the result is the same, when pushing something too heavy the wheels turn in the air but I am not sure if there was a change in the robot maximum push, should it be a change?

Also last question, I am currently setting the pwm the L-298n bridge in the motors output directly
a) can I set it on the enable pins?
b) Is there some changes doing that?
st.com/web/en/resource/techn … 000240.pdf

I am sorry to hear your motors failed. As we state on the product page, running small DC motors like these at higher voltages can decrease their lifespan. It is generally OK to use a higher voltage power source and lower the PWM duty cycle (which is not the same as PWM frequency), but I cannot tell what the duty cycle limit you used in your code is. It seems like you say in some instances it may have been running at 100% duty cycle, and if you are using 12-14V power supply, I would not expect the motors to last very long at those voltages.

In general, it is really hard to follow your post and what you are doing, so it is hard to say what exactly went wrong and how to address the issue. For example, I do not understand what you mean by “getting a total of 14,8 volts, reduced by the l298 H-bridge to nominal value of 8,5, but with 1khz frequency”. Do you have some kind of regulator attached to your driver that is reducing the voltage, or are you implying that the frequency is somehow reducing the voltage? If you try posting short, clear description of how you were powering the motors and how you were trying to limit the voltage to them, I might be able to offer more help.

Thank you for fast reply, I am sorry I couldn’t express well what I am doing, my English is not so good.

Thank you for your advice. So Imagine I use a power supply of more than 14,8v (two LiPo battery of 7,4v), and reduce it with pwm to a duty cycle equivalent to 6v using 1khz, the motor wear is the same that powering them directly to 6v with no pwm? and with lower frequencies such as 500-400-300hz? do you know the lower frequency I could use or is a higher frequency always better?

Answering your question later I’ll post you a image of my circuit, I am directly powering my motors from the L298 H-bridge without any regulator, and as I am making a minisumo robot that needs high power and torque only for short periods of time I want to find a way of giving them 8-9v only when pushing the opponent out, but without reducing too much the motors life-time.

Running these motors using a 14.8V power supply at a 40% duty cycle should result in about the same wear as running them at 100% duty cycle at 6V. Many multimeters are capable of reading the duty cycle of a signal, so it might be worth measuring the output to your motors in this way to be sure your code is doing what you intend.

Although there can be changes in the motor efficiency with PWM frequency, the changes are generally small and I would not expect that running these at 1kHz would cause any problems. Higher frequencies like 20kHz are used often because the sound generated by the motors from the signal is above the threshold for human hearing.

Generally, we recommend that small DC motors like this be run at 20-30% of their stall current for continuous service at their rated voltage. We would expect a heat related failure if the motors are being run with too much power (although there are other things that can fail as well). If your motors are enclosed in your chassis, you might look for ways to open the enclosure to trap less heat. Shortening the length of time the motors run at higher power or putting pauses in your routine to allow the motors to cool might be another solution.

These motors tend to have relatively high inductance, and low frequency PWM is filtered effectively to an average current in the windings.

But when I switched to a very similar but lower inductance DC motor, I started blowing my drivers and overheating my motors. The reason for this is: While 42% duty cycle @ 14.4V will give an average current of about 6V, without sufficient inductance in the motor it will give a higher peak current. This can be very destructive to the smaller motors and their brushes, because heating losses are I^2*R, and integrated over time, which for a varying current will be greater than if for an average smooth current.

P.S, you are not really running it with 14.8V, those are nominal values for the lipo. It is based on the 3.7V nominal voltage of lico (and is actually more like 3.8V for modern lipo configuration.) So while the majority of time your 14.8V battery might be near 14.8V, fresh off the charger is it more like 16.4-16.8V, and stays near that for the first 10% of its capacity. That’s potentially 280% the voltage rating of these motors!!