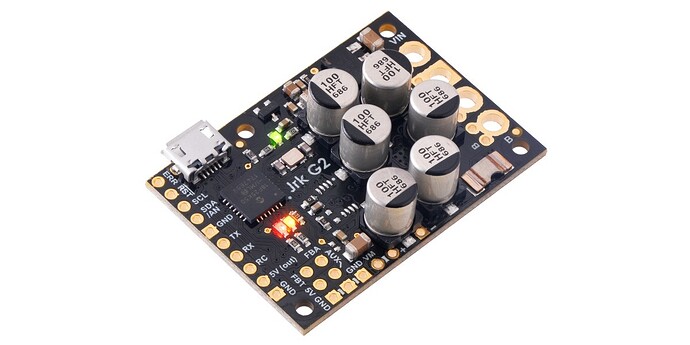 Hello, the new boards out, I take it they are more or less a higher power version of the 12v12, of which Ive been using for years?
Id hope they are just as simple to set up as the 12v12
Also Id be putting a heatsink on the main chip anyway, Ive been doing that with the 12v12
Cheers, David Lane.

no one going to answer?

Ok, they use mosfets, so should I put little heatsinks on the mosfets on the under side of the board and fan cooling?

The new Jrk G2 controllers should function very similarly to our previous jrk 12v12 boards. There are differences in pin placement and form factor that mean they are not a drop-in replacement, but they still support the same serial protocol and commands, so we expect most serial software written for the older jrks to just work. There is more information about the changes in the “Comparison to the original Jrk motor controllers” section at the bottom of any of the Jrk G2 product pages.

We do expect the MOSFETs on the bottom of the new Jrk G2 units to generally be the hottest parts, so that is probably the best place if you plan to add heatsinks and air flow.

Hello Claire and thanks for the reply.
I checked out the differences as see that the newer ones have hardware current limiting, while the 12v12 does not.
This might explain why we can run the 12v12 at ridiculous high current, up to 45 amp spikes no problem.
So if the 18/27 is limited to 27 amps continuous, would it go higher in current flow?
Same question for the 24v21…
On DIY motion simulators using large DC motors, we tend to run them up to 100% duty cycle on occations, but most of the time they are running stall current figures to get the motors moving.
Cheers, David.
P.S. ,ok, heatsinks and a good fan on the underside mosfets of the newer ones

The motor driver on the Jrk 12v12 has a hard current limit that is typically about 50A, but might kick in as low as 30A or as high as 70A. For the Jrk G2 controllers there is a configurable hard current limit that can be set high enough to generally be out of the way (a maximum of about 42A for the 24v13, 53A for the 18v19, 64A for the 24v21, and 76A for the 18v27). It’s important to note that this hardware current limit on the Jrk G2 does not cause some shutdown; instead the current will get regulated to that limit, so it should be more practical than before to do things like safely deliver 30A to a motor that would otherwise want to draw hundreds.

We know lot of members of the simulator community currently use the Jrk 12v12, and we think these new controllers are all-around better, so we are interested to hear how they do in your setup!

ok, thanks, yes the 12v12 gets thrashed hard and yes shuts down near 50 amp spikes.
The G2 really does need to be able to thrash more current, especially if we look at higher wattage motors, currently using 200 watt motors at 12v, but if we can use higher wattage 12v motors motors, as some guys now use but run them with ard and MM, then its an advantage to us to have more power.
Considering we run stall current and not continuous, the 12v12 is basically a 500 watt motor driver in our books.
So if the G2 is run at 12v, we hope to bounce up to 70 amp spikes through it if we can.
And if we run 24v, again, hope to run big current spikes through them if we can.
Im a while off getting a pair of g2 anyway, got other expenses in the way, but yes, will keep an eye out as to what the simulator guys go with them, although they are already saying “ard and mm is cheaper” , but they dont have the reliability of the JRK .
Again thanks for the help, will report back as we go

So I hate to dig up an old thread, but this seems as appropriate a place as any and relates to the current capacity discussion.

The specs on the JRKs just list a maximum current, but they don’t seem to indicate what voltage that current is at and if that matters. In my head it seems like it should matter. 50A at 1V is only 50 W of power while 50A and 20 V is going to be 1000 W. Does the JRK put up with higher currents at lower voltages? I’m looking at a sim rig myself and recently picked up some 24v21s at a good price, but was curious about the current limit since I’m only going to be running 12V motors. My assumption is the 24v21 is rated for 21A at 24V, which is pretty phenomenal for such a small board. The second assumption that goes with that would be that it would handle 42A at 12V as it’s the same overall power, but there is no mention of that anywhere I saw in specs so far.

Secondary question while I’m here. I was thinking about just putting one large heatsink on all the MOSFETs on the bottom just to be safe. Is there any reason this would be a bad idea vs trying to cut small individual heatsinks for each chip? I can see that there would be some heat transfer between chips if it’s a single heatsink, but I got the impression they were all sharing the load to begin with, not coming on sequentially as the current demand rose.

Once you pick a particular Jrk, the current it can deliver is mostly independent of the operating voltage (though there is a little bit of drop-off at the high end). If you know for sure that you want to operate at 12V, you can use the Jrks G2 18v27, which gives you that higher current/lower (max) voltage tradeoff you are looking for.

The MOSFETs are not in parallel, so they do not share the load in that sense (the current goes through different pairs of MOSFETs depending on the direction of the motor). It’s fine to put one big heat sink across all of them; just make sure you do not short any of the leads to anything.

Okay, thanks for the info! I was originally looking at the 18v27, but stumbled across someone selling a pair of the 24v21 at half price, so I figured that would still be fine for me. The stall current of my motor is only 20A, so I should still be fairly safe I would think. I know I’m going to have higher spikes from direction changes, but those should be very short duration and something the JRK can cope with from what I’ve read about them. Also planning to actively cool them, so hoping that should give me a little more headroom to be safe.