I have a pololu 36v9 motor driver hooked up to an arduino and a brushed dc motor that draws a continuous 4A current.

The motor driver worked fine for a day then when trying to set the Dir pin from low to high would not work and one of the black chips on the motor driver started smoking and bubbled up.

Any idea what would have caused this problem?

I am sorry that your motor driver is damaged. It sounds like the motor might have drawn more current than that driver can handle. Even though your motor draws 4A continuously, the stall current can be much higher, and reversing the direction of the motor when it is spinning quickly can cause it to draw twice the stall current. You might want to implement some kind of acceleration limiting in your setup or consider a motor driver that can source more current.

If you post a link to a datasheet for your motor, what voltage you were supplying, and what kind of load was on the motor, we might be able to better confirm what happened.

The stall current is 47.8A which would explain why switching directions was a problem. If I avoid quickly changing directions and don’t stall the motor should this motor driver still be fine? Because our school project has a limited budget can’t can’t afford a more expensive driver.

Also if I hook up the temperature sensor fail safe would it be strong enough to prevent this from happening again? 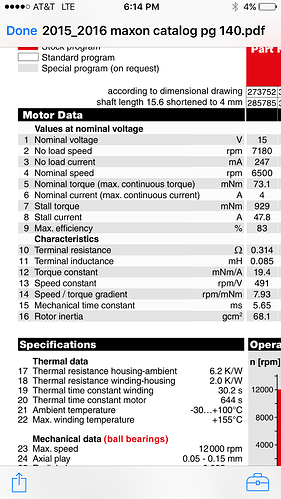 If you avoid behavior that draw a lot of current (e.g. changing direction quickly or stalling the motor), you can probably keep the motor from drawing to much current. I do not think a temperature sensor would be fast enough to prevent the motor driver from being damaged in a case where the motor switches from full speed forward to full speed reverse, but it might be helpful if the motor is just getting a little too close to stall.

We already ordered another 36v9 and soldered it together so I think we may be stuck with that unless you accept returns on an already soldered together motor driver?

If we do stick with the 36v9 which can only handle a continuous 9A do you think an 8A fuse or circuit breaker would protect the motor driver since we don’t plan on stalling or switching direction quickly. If so which wires would I need to protect out of the (V+ OUTA OUTB GND)?

Unfortunately, because the nature of electronics, we cannot accept returns of opened items. However you could probably get your system working with that driver if you take the precautions we talked about previously, like making sure not to stall or suddenly switch motor directions. Adding a fast acting fuse would also help protect the motor driver, though current spikes can sometimes happen faster than the fuse can act so it is not an absolute protection. If you add a fast acting fuse, you should add it on the connections supplying power to the driver.