I just bought this encoder pair (along with the gearmotors), and I realized after I sent in my PCB order for the board that the encoders are going to plug into, that the board will be providing them with 5 volts instead of 3.3 volts. Looking at the schematic on this page:

Is that all it takes? I’m hooking the data line to a Teensy 3.1, which has 5 volt tolerant digital I/O pins.

I am very comfortable with doing surface mount rework, and have a large supply of 0603 resistors, including 220 ohms.

Yes, removing the two 180 ohm resistors from R3 and R5 and adding a 200 ohm resistor to R4 is all you need to do to make that board identical to the 5V version.

It looks like the Teensy 3.1 has a regulated 3.3V output; is there a reason you are not using that?

By the way, your robot looks pretty cool!

I am using a one-amp LM2940 regulator to provide 5 volts (from the battery 7.4 volts). All the sensors and external boards are being provided with 5 volts, since they all are 5 volt tolerant, and the Teensy can only source 100mA on that 3.3 out line. The three Sharp IR sensors are 5 volt sensors, but the voltage they produce maxes out below 3.3 volts, so I can tie them to the 3.3 volt analog in lines on the Teensy.

The Teensy is 5 volt tolerant on all digital inputs, so running everything at 5 volts simplifies the design (I don’t need a 3.3 volt regulator). I could have fed the encoders with 3.3, but the board layout was simpler with them getting 5 like all the other connectors, and honestly I didn’t think about it until after I got the encoders in the mail.

I was originally designing this system to work with the Micro Python board (I contributed to the KickStarter campaign), but that won’t arrive until March at the earliest, and I want this little guy running way before that, so the Teensy seemed like a better choice. The Micro Python board is strictly 3.3 volts, so I ordered the encoders to be the 3.3 volt version.

Cool. By the way, I noticed you are using a linear regulator. You might consider using our S7V7F5 or S7V8F5 switching step-up/step-down voltage regulators instead. They will probably be much more efficient.

That smaller one looks awesome! I’ll have to see if I can find it with a Canadian distributor.

I hooked up the encoder with my logic probe, and got a really nice ~3 kHz signal (which is about what I would expect running at ~360 rpm with the 5-spoke interrupter wheel). 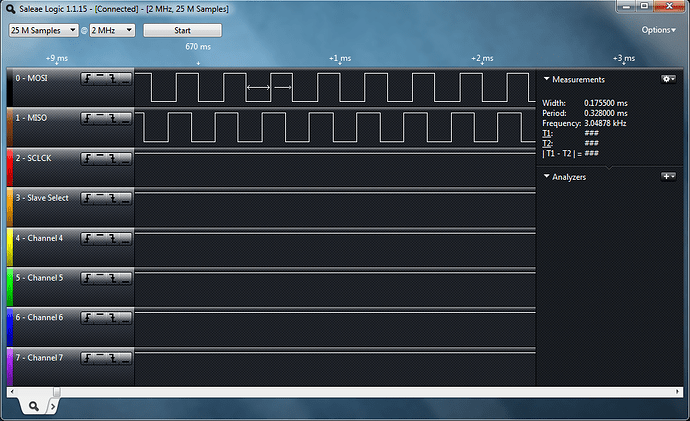 I just ordered 4 of the S7V7F5 regulators from RobotShop, so I’ll definitely be using one of them. Thanks for the pointer