Hi
besides using gears is there a way I can control a motor speed? I’m interested in the lower rpm range from about 3-12 rpm and anywhere in between. For example it would be nice if I can just flip a switch and have the motor speed change from 3 to 7.
thanks in advance!
Alex

What kind of torque do you need? We sell a 1000:1 metal gearmotor capable of getting down to 1 RPM. You can change the speed of a motor by changing the voltage applied to it. One way might be to use your switch to switch between the two power sources that correspond to the speeds you want. Otherwise, you would need to use a microcontroller and a motor driver to detect the switch and change the speed.

Hi Ryan,
I think this would work since I just need to spin a rod weighing about 20 grams. The switch is a great idea as well. Do you have a link for the switch(s) and a simple diagram as to how I can wire it up? I’m a total newbie at this

Also, would something like this work as well? pololu.com/catalog/product/1392

) would work for you. What kind of switch to use would depend on what functionality you want. For example, do you want it to toggle between the speeds or just briefly be at one of the speeds and most of the time be at the other?

The jrk would work, but it is kind of overpowered and, if you don’t need feedback, has more features than you need. Our lowest-power Simple Motor Controller would be a cheaper option. 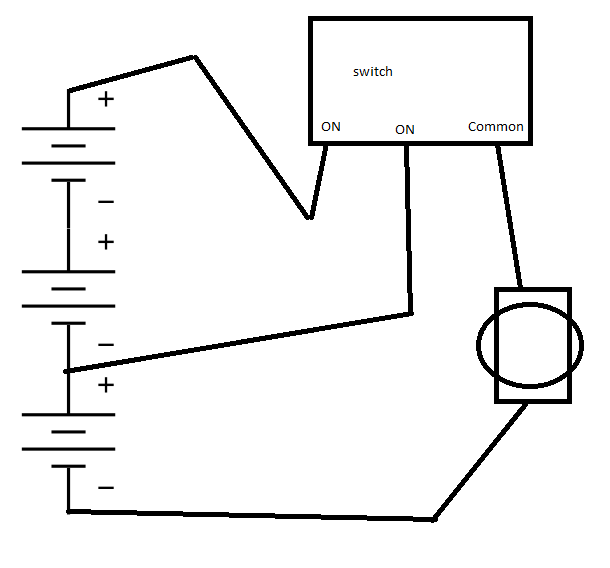 Thanks, looks good - do you also carry the switch or know of any vendor that does? thanks!
a

Something like this toggle switch should work fine; in general, any SPDT switch should be okay as long as it can handle the current going to the motor.