I have a RP5 tracked chassis robot. WIth its standard brushed DC motors and gear drive trains - I find it too slow at 15cm/s

I am thinking taking out the gears, and retrofitting with a direct drive MicroMetal mesh 30:1 or 50:1 )(like the 3pi robot).

Ideally I would like to cover 50cm/second. Is that possible? Assuming a 4mm D shape shape and aluminium hub for torque transmission.
And also taking into account the motor dimensions and RP5 width, it should work. A metal section, on which the motors can be mounted
on also shouldnt be too much of a problem.

50 cm/s sounds doable, but I think it will be pretty hard to get a different motor in there. I don’t know what the gear ratio of the RP5 is, but 30:1 with the micro metal gearmotors will almost certainly be too low since the 3pi wheels are much smaller, and you need quite a bit of torque if you want to be able to turn. You’ll probably want to go with the HP versions, though even those motors are weaker than the stock motors on the RP5.

I’m not sure why you said 4mm on the shaft; the micro gearmotors have a 3mm output shaft.

The 4mm was a typo. 3mm shaft to 3mm aluminium hub was what I intended.

I was thinking 30:1 becuase you can get a higher RPM (1000 perhaps). RPM of motor is irrespective of wheel diameter,
at least on the output shaft side. Although I understand what you are implying.

The other question I had in mind to ask, is that on RP5, you have these carbon like tubes connected to the motor, along
with a “104” ceramic capacitor. what are they and what is their purpose? I was thinking of replacing them with 10uF electro.

I think I was quite explicit (as opposed to implying) that you probably won’t have enough torque with the 30:1 gearmotors. The wheel size is relevant since you need more torque for a larger wheel; your 1000 RPM might turn into 0 RPM once you put the robot on the ground.

I’m not sure what those tubes are, but they are probably resistors. 10 uF does not make sense anywhere in there. What are you trying to accomplish?

Apologies for the explicit versus implying. I will look up the formulae and calculate all that is required by counting
the teeth on the gears, measuring the diameter of the wheels and so on. I will post my findings. Just looking
for ways to increase speed.

With the motor, I would just like to understand what those tubes are doing and whether they are absolutely
necessary. Could they be a crude version of a high power resistor like a 10 ohm, 5 watt resistor?? Or an EMI
suppressor of some sort?? Pure curiosity here!

As for the 10uF capacitor, never mind. I was thinking that a higher capacitor value will act as power factor
correction and enhance noise smoother. Intention was to improve the efficiency. However, the manufacturer
may be already come up with a balanced impedance to match the motors characteristics. So I am no longer going to question this one.

I suspect those tubes are resistors, which would make them not absolutely necessary. They would have to be much less than 10 ohms, and they could be there to keep the stall current from getting too high. I’m curious why they’re there, too.

The resistors are in series with the motor, so the 10 uF cap replacing them would never make sense for a DC motor since your motor just wouldn’t go. Putting 10uF across the leads also won’t make sense for any DC motor (at least of this general scale) since you would just be loading your motor controller more. I suspect a lot of electrolytic caps wouldn’t even survive being on a motor controller output.

Thank you. I understand now.

Hi,
Those tubes are coils or inductors, again along with the capacitors are there to reduce electrical noise from the motor’s mechanical workings. It comes to something when the manufacteres emplyees don’t even know the product. As for puting larger caps across the motors, it will do no good, and could be a problem.

I have just ordered my Pololu Zumo chassis and will be doing my own thing with that soon. I too have the PR-5 but very disapointed that the wheels slip round in the tracks if it gets in a jam, the other strange thing was the power leads on one motor are thicker then the other, not very good really!! But I have also brought the round chassis, etc and motor drivers, I like the tiny DRV8833…

Here’s a couple of pics… 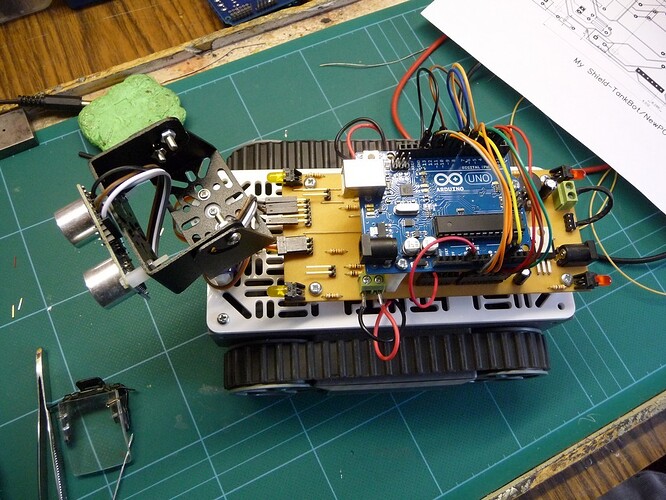 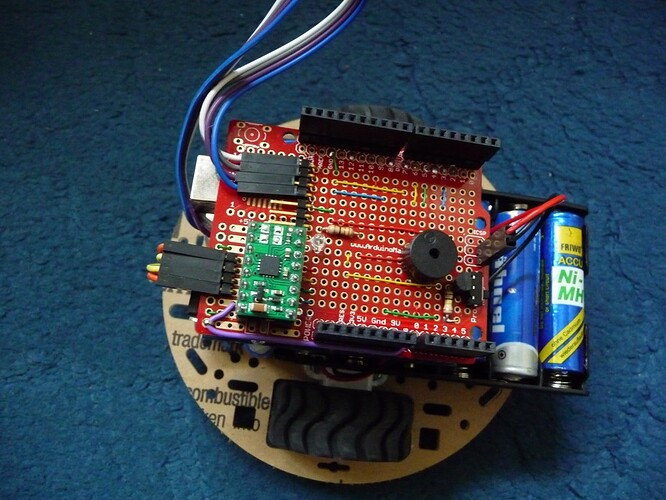