I’ve been battling with a variety of 6V micro gearmotors in ratios including 298, 250, 210 and 150. I have a high torque load (~30 oz/in) I need to move and I’m finding that the ratings for the motors on the Pololu website are nowhere near what I’m seeing in the real world. For what it’s worth, the Pololu torque numbers for these motors are almost double what I can find on most other websites for similar motors.

I’ve included a picture of my testing rig. It’s pretty straightforward. A 1 inch radius wheel with weight added to the end of a bit of fishing line. The motor pulls the weight straight upward.

Am I doing something wrong? For what it’s worth the stall current I’m seeing matches the Pololu spec very closely. 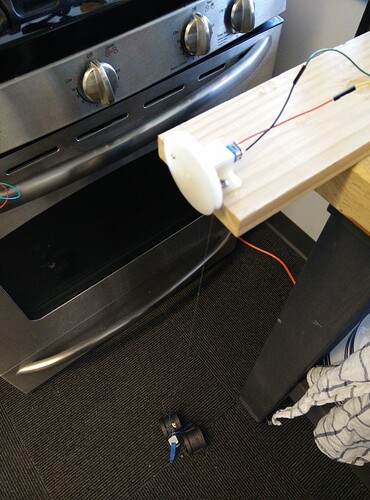 What are is the current rating and voltage of the power supply are you using?
Could you post the the MEASURED motor voltage and current, at the maximum load (weight still moving upward)?

not sure how pololu specs it, but maybe they just multiple through the gears assuming 100% efficiency?

But its not impossible that the same size motor will be able to have a 2X power difference from another motor, if the better motor is better built. How its made can vary quite a bit.

I didn’t measure voltage during the test. However, the supply should have been able to supply north of 500mA at 6v pretty easily. As I do further testing I’ll be sure to capture that as well.

Here’s a data table of the results. Sorry for the bad formatting but it was a quick and dirty test. The table lists the current draw for moving a given weight at one inch (oz-in) for each gear ratio. In each case the motors stalled in the ~300mA ballpark. I’d consider 300mA an approximate value as I wasn’t interested in letting them stall for very long for fear of destroying even more motors. Pololu lists the stall current as ~360mA for each motor so this seems like a reasonable value.

There are lots of other places that sell these motors on the web. Many of those sites list torque values that are half of what Pololu lists and are consistent with what I’m observing. It’s like someone accidentally doubled the data on the Pololu site. 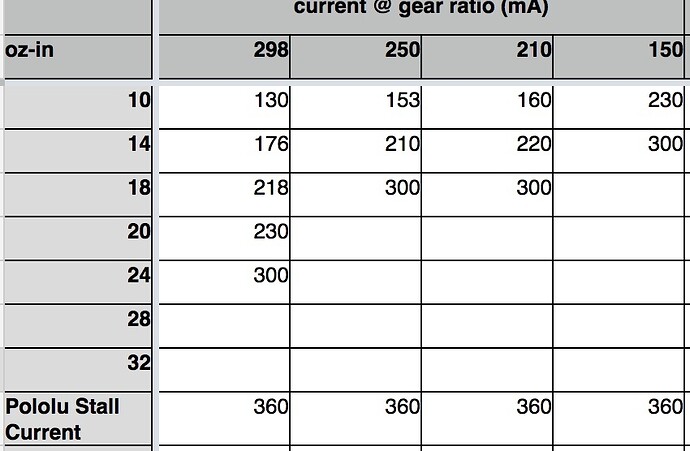 The test is completely useless unless the voltage actually being applied the motors is known, and the power is clean DC. “The power supply should have been able …” is not good enough. Note that the meter used to measure the current will introduce a voltage drop.

I agree with Jim that the voltage is important, but I’d say the current is more important. It would be very good to know the actual mA not just “about 300mA”

That said, I’d say the test is not “worthless” at the moment [edited for clarity]. I dont know if the test is any good, but I would recommend (to Jim?) to see if there’s anything else he sees in the system that could be at fault. if the motor is pulling 300mA, it should get roughly the torque of Rating@360 * (300/360). It should be delivering a torque proportional to the current through the windings, right?

Are you thinking that the voltage regulator is just dropping off voltage? But what of the idea that he might be measuring 300mA successfully?

Tomek: You are correct, the test is not useless, but the results cannot be interpreted if the actual motor voltage is not known. If the voltage is low, the current will be low and the torque will be low.

Thanks for sharing your tests with us. I quickly tried a few of those gearmotors on our torque meter, and the initial results were in line with the specifications we list. Here is what my setup looks like: 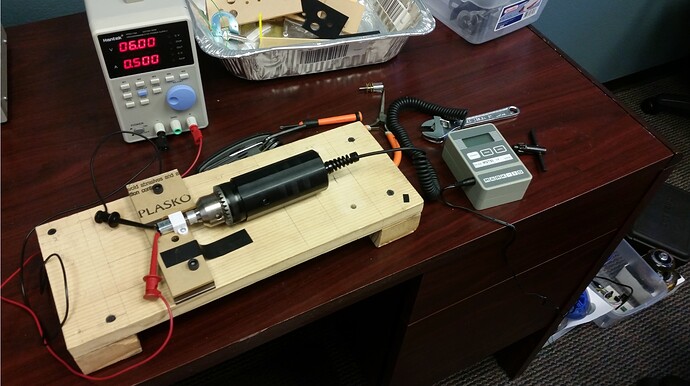 We will look into this more and follow up next week.

Thanks for your reply. I’ll rerun my tests and capture both the voltage and amperage data along with the torque.

I don’t have a dedicated torque meter for values this small. I think that a 1 inch radius wheel pulling ounces straight up is a valid way of measuring oz-in but maybe I’m wrong. Hopefully I’m missing something simple in my test setup and that accounts for the discrepancy.

How long are your motors stalled during their test? While stalled, the motor will rapidly get hot, the coil resistance will rise, and the current and torque will drop. Our listed stall torques were measured within a few seconds of stalling a cool motor.

The 1" wheel approach seems reasonable, except that the gearbox output shaft is also required to support the entire weight on the cord. The bearing friction will subtract from the available torque, so the experiment will underestimate the maximum torque.

I think Jim is spot on about that catch that the shaft load is going to be high in this original post’s test.

I don’t agree that the bearing friction in a normal well supported load is going to subtract anything meaningful from the torque. The bearing should be very low friction relative to the capable output of the motor. HOWEVER, when the shaft is deflecting because of the load and the bearing being asked to support too much, then it will cause problems. Possibly extend far enough to cause gear mesh problems, ect. So an ideal situation would be to have something like this:

— <1’ hub> ---- ----- motor shaft with simple bronze sleeve bearings [the ones they have]. That would add friction from 2 more bearings, but remove the angular shaft deflection from the load. I think it would get you a better test setup without the complexity/sophistication of Pololu’s inhouse system.

Ugh, I retract my previous statement. I was thinking foolishly of the shaft on the back of the motor, which is of course tiny and not going to tolerate 24 ounces.

So I know less about the output shaft, but am now curious and running estimates.

I really have no idea if that’s too much, it seems quite insignificant, certainly likely less than the tolerance of the sleeve bearing.

Reran the tests and got the same numbers as before in terms of oz-in so I won’t repost the data table from my first post. I monitored current and amperage simultaneously using two different meters. Amperage pic is at stall. Voltage pic is while hauling weight. I can confirm that voltage at stall remains 6V.

You can see that these motors are stalling for me at ~300mA. The stall voltage is ~6V.

In response to Ben’s question about how long I stalled the motors… It was just a second or two. I’m not excited about burning these motors out so I tried to minimize stall time.

I honestly don’t know what to make of the difference between what I’m seeing and what Jon posted. 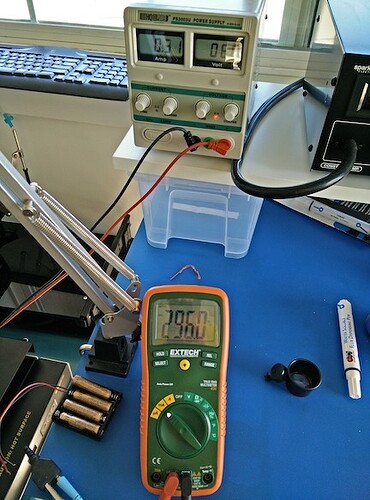 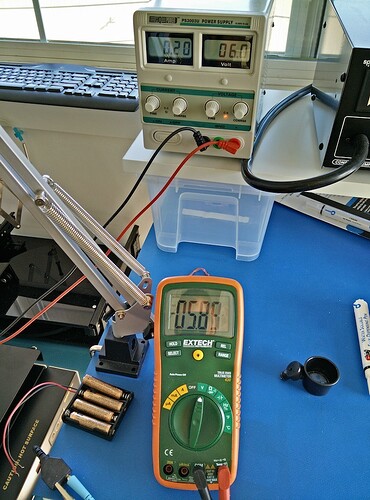 Yeah man, i dont know. Your setup doesn’t look that bad. It looks verified to be decent at this point. I wonder what’s missing. Your numbers off? Pololu’s numbers off?

One question I had to Pololu, was why the power supply was pulling 0.5A in the test, is it powering something else besides the motor?

Jonjenk, when you are using that other power supply, is it saying 0.2A simply because you are not stalling in that particular image?

One thing I would check is the resistance of your used motors and a fresh motor, if you have one. That would help establish if maybe the brushes are damaged, if your used motors have a higher resistance. It would also explain why they are only pulling 300mA instead of 360mA.

From previous experience in the 20D motors I found the brushes are somewhat sensitive, and had some conversation on these forums about that topic and maybe why it was reasonable (i still think it needs to be closer matched to the limits of the windings. I find them to be unfortunately weak compared to the potential possibility with the rest of the motor components.) Many applications need impulse torque, and if it didn’t, I would often use a stepper motor instead of a geared DC motor.

Tomek, You are correct. The meter is showing 0.2A in the one picture because the motor was not stalled at that particular time.

Ben and Jon, Are you testing with the low power 298:1 gear motor? Item number 1094. That’s what I’m using. The motor comes in two other variants (medium and high power). If you are really driving 0.5A to the motor is it possible you are testing the medium power version?

I just ordered the medium and high power versions so I can test those as well.

Sorry for the delay in getting back to you; I wanted to make sure our setup was the same as when we originally tested these gearmotors, and that the method of testing was identical to what we did before.

I tested the 298:1 and 250:1 micro metal gearmotor (low-power) at 6V, and was able to consistently measure maximum stall torques that match what we list on their product pages. In both cases, the torque peaks at the max stall torque and then starts dropping. For example, the 298:1 gearmotor would peak at 40ozin and then drop to about 30ozin over the next few seconds as the motor heated up.

I think Jim is right on the money when he pointed to your testing method as the reason you are getting different results. You are radially loading the shaft with a lot of weight, and that is going to substantially reduce the efficiency of the gearbox. Generally speaking, these motors are not intended for that kind of loading. They are appropriate for small robots, like our 3pi, where the whole robot weighs 5 ounces and that load is distributed over two motors and a ball caster. What happens if you use a much smaller weight with a larger radius?