my name is Peter and i build a 2 DOF motion rig using the JRK 12V12’s. Somehow i have blown up two
JRK’s. I am pretty sure it is something i have done wrong myself. Strange thing: they both just died on me
after working propperly for ours.

I know it is (at least) de USB controller that died because my compter (and i have tried more computers)
just dont see the controller anymore. Nothing happens when i stick the USB cable in. And no com ports show
up as divices anymore.

I really want to replace the controller with a new one (it’s amazing that that tiny controllerboard kan run a
12Amps wiper motor with ease! Kuddo’s!!!) but is there any way i can prevent the USB from blowing up
again? Is there some sort of USB fuse “thingy” can use?

thank u for your time.

Sorry to hear you are having problems with your JRK 12V12 USB Motor Controllers. Could you tell us more about your system? What are you using to power it? What are the specifications of your wiper motors? What was your system doing when the controllers failed? Also, could you post pictures of both sides of your boards, as well as pictures of your setup that show all connections?

Thanks for your replay. I am using the JRK 12v12’s for my 2DOF motion sim. I have attached five pictures with this email. Two are photo’s of the JRK and one
is a schematic of the way i connected everyting (the same for each of the two motors).

I have also attached 2 photo’s of my rig. One with everything build on en one of the bare rig (I just painted it this weekend

For a power source I am using a 12Volt 30Amps power supply (one for each motor)
The motors are old wipermotors from a Volkswagen Caddy. (12volts)
For the position feedback I use 100K potmeters.

The rig is pretty much in balance when I sit in it so the JRK’s really do not need much power to move the motors.

One thing I found out (and this is what probably burned the first JRK) is that the outside of the wipermotor had voltage on it. And because the rog is made of steel it
Somehow short circuited with the other motor. I fixed the problem by isolating both engines from the rig. (alltough I now think it’s a good idea to ground both motors
Alswell).

So, to answer my own question: I think I blew up the JRK myself. Just don’t know why the second one blew up after working fine for several ours of game playing?

And: I power them by plugging in the the powerunit with the wallsockets. Is it better to use a switch?

Thank u for your time. 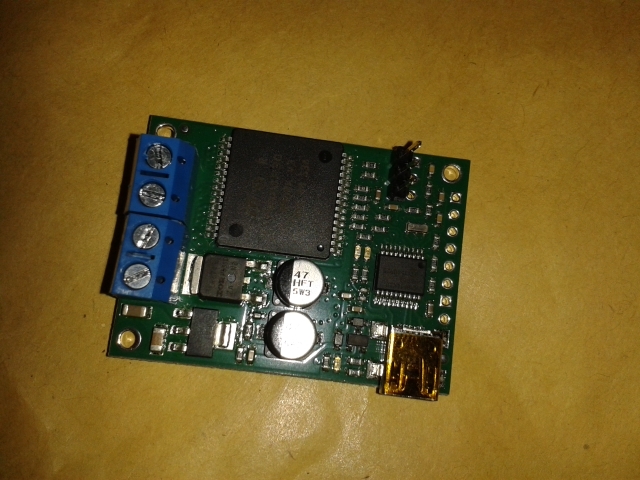 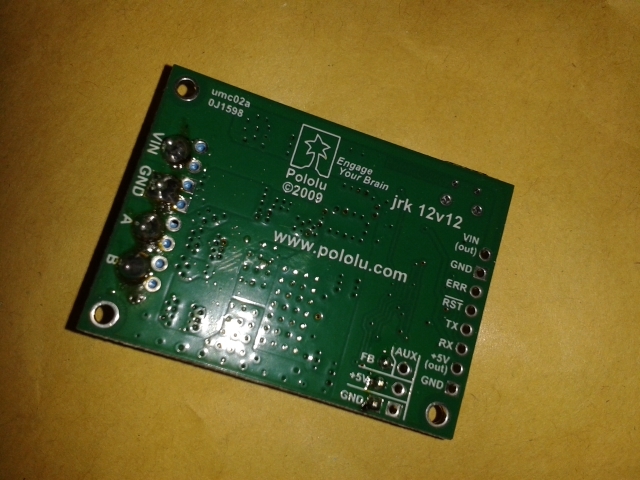 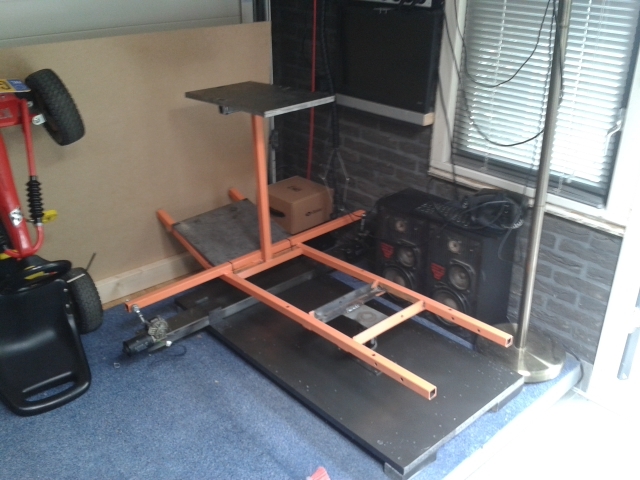 If your motor has one of its terminals internally connected to its case, you should definitely not ground the case. Using the jrk controller, both motor terminals will have positive voltage applied to them at some point, so doing that would reintroduce the same kind of short you encountered before you electrically isolated them from the rig (unless you can remove the internal connection).

The power on sequence for the jrk does not matter; you could plug in USB or power first. Also, it probably does not make much difference whether or not you use a power switch. It is just up to your preference.

When the second driver broke down I had isolated both motors from the frame. (and tested it with a voltameter). I set up the JRK using a tutorial from the simtools website.
( http://www.xsimulator.net/community/threads/playseat-to-2-dofseat.5401/page-2#post-56352 ) I realize that the settings can be different for each motor type, but to be
fair, I have no idea what I am doing there…

But you have already answered two of my questions: I did good by isolating the motors from each other, and there is no particular order in time in applying the 220Volts to the
Powersupplies that power the drivers.

For a brushed DC motor, stall current is how much current the motor will draw for a given voltage when its output shaft is fixed and cannot rotate. It is generally not good to stall motors, as this wears the brushes and drastically decreases the lifetime of the motor. If you cannot find a datasheet for the motor your are using by searching the Internet, you can try measuring the stall current using the following procedure:

Brushed DC motors going from full-speed forward to full-speed reverse (and vice versa) can briefly draw up to twice their stall current. So, if there was a lot of demand for the jrk to change direction rapidly at high speeds, it could be that your isolated jrk motor controller was damaged from excessive current draw.