Hello, I am new to robotics and stepper motors but need to learn about them as I am designing and building a Rolling/Packaging machine for a product I have invented and I have read several threads on this forum which are similar but I have somewhat different questions and needs and as I am still mostly in the design stage I wish to get as much help and info as possible beforehand to save time and effort in the future. I wish to put these questions to the experts and get any help I can before I get started in earnest.
My main needs are help with initial planning and software design as I am so new to this it is overwhelming trying to disseminate all available avenues and this is how I ran across your company and your Tic controllers. I have purchased many of the parts which will be needed and have several Arduino’s, an A-Star Prime SV , 1 pc T-500 and 4 pcs of T-249’s along with several other types of stepper drivers and controllers but very much prefer your Tics for the controllability through your PC GUI as I am so new to the control software of microcontrollers…
Even though there are many Steppers in this design there are only two main functions. One is the 4 linear steppers that move the rails/ROLLING MOTORS in and out in symmetrical unison. The other function is the 4 steppers which will also be rolling in unison but in opposite directions towards each other and the center.
The initial design is a 14 foot long symmetrical machine using 3 pcs of SBR16x300mm linear rail/cars on each side with 2 NEMA 17 motors/300mm linear screw actuators on each side to control(move in and out) the RAIL on which the rolling part of this machine will be mounted. The rolling part will be accomplished by 2 other NEMA 17 motors on each side/end for a total of 8 stepper motors total. The motors on each side are connected by 2 pcs of 12 foot 1/4 inch Stainless rods which will actually roll the material between them and one end has a quick disconnect HUB to allow removal after rolling for packaging the finished product. I have designed this machine in CAD and also 3D printed these HUBS/parts and am currently building the full size prototype machine for testing.
My plan is to use your TIC GUI to control each batch of 4 4-wire bipolar motors using one instance of your GUI running TIC COMPACT PROTOCOL controlling each batch of 4 individually and I believe I can accomplish this by how I wire the rolling motors as one side(set) will be wired in PHASE, and the other side of each set will be wired out of phase. This will allow me to get the information I need to know to be able to write the finalized software code. As in how many times the material needs to be rolled versus time(Revolutions vs TIME), and sequencing the roll to the movement of the Rail(TIME vs DISTANCE) as the material is rolled. After reading on another thread about the TIC Compact Protocol controlling multiple motors in sequence, I believe I can use this initially to control the 2 separate blocks of steppers to get the VARIABLES needed to write the finished software. It would really seem to be beneficial to me to find a programmer that could take these initial inputs and variables and would/could write the code needed for this design that would also allow small changes to the program depending on the width and thickness of material needing to be rolled. The software and code will be the sticking points as I move forward and I look forward to any guidance any on here can give.

I have some pics of the Machine designed in CAD to show what I am designing and trying to do but these pics only show one side of the machine and parts. The other end and side is exactly the same except for the motor Hub which holds tight the stainless steel rods which are also not shown in this pic. The two rods are held tight in the shown Quick Release Hubs when rolling and one of the hubs is shown in the open position for removing the rods and packaging. TIA! 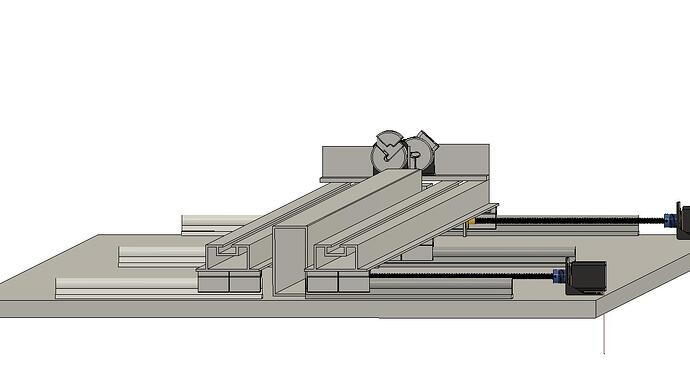