Currently i have my Maestro mini 24 Servo micro controller attached to 24 SpringRC SM-S4303R Continuous Rotation Servos. this setup runs a rig which i have made. While the machine is running only one servo is moving at any one time. I previously had a power supply which ran at 6 v and only 1.2 amps and it broke after a bit, i believe due to the motors attempting to draw more current than was supplied. Granted I’m pretty new to this stuff so this is just speculation. I was thinking about getting one of these two power supplies (Wall Power Adapter: 5VDC, 5A, 5.5×2.1mm Barrel Jack, Center-Positive or Wall Power Adapter: 5VDC, 3A, 5.5×2.1mm Barrel Jack, Center-Positive) in the hopes that they will work. If anyone has a suggestion as to a better power alternative or some input as to which supply would work best it would be much appreciated.

A 1.2A supply is nowhere near adequate for your application. A general rule of thumb is to budget around 1A per standard size servo, though you can get by with less if you know that only a few servos will ever be running at any given time.

With that many servos, you might consider using multiple power supplies, each powering its own bank of servos. The following picture has dashed lines where you can cut the VSRV power rail into multiple separate banks: 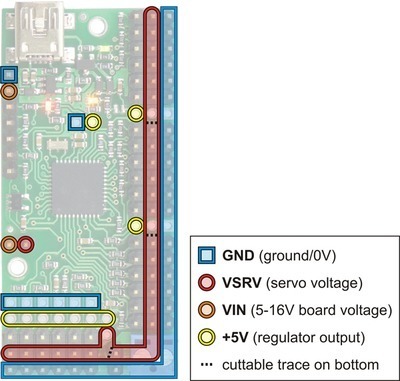 Specifically, you would cut the traces where they narrow along the underside of the PCB. You could also just power your servos directly (off the board).

That’s where I’m somewhat confused i keep hearing this 1 amp per servo number but my rig actually did run with all 24 servos connected on just that 1.2 amp supply and at a point during my testing i left the thing on for a day with 6 servos attached and it worked just fine so I’m kinda confused by this necessity for 24 amps of power i keep hearing about. if someone could explain this to me it would be really helpful.

The actual power drawn by a servo depends very strongly on the load attached to the output arm. The “1 amp per servo” rule is just a rough guess for servos that are straining against a mechanical load. The current draw could be much higher than that.

If the servo arms are moving light loads or none at all, you might be able to get away with a lot less than 1 amp/servo on average. However, when an unloaded servo starts moving from a standstill, it will draw quite a bit of current for a fraction of a second. If you have a bunch of servos and a wimpy power supply, the collection might work but you should expect trouble.