I have read threads by Brandon M tech support from Pololu. This thread in particular.

The values and configuration parameters that would be best for your application are dependent on your system. You might be able to use someone else's as an example, but I would still expect them to need adjusting. Many encoders use "counts per revolution" to correspond to two "counts" per encoder cycle (one when the signal goes high and one when it goes low). However, the jrk only reads one transition of the encoder signal, so you would actually be getting less than what the encodes states w…

Following his example for calibrating the feedback. However i’m unable to calculate the maximum due to the fact that my counts a period is 0.0216.

To my understand the neutral being 2048. The maximum should be 2048+ 0.0216 . However the JKR utility doesn’t allow that low of a value to put into the software.

Am i getting this right? or is my calculation totally off?

I suspect something went wrong in your calculation; our 499:1 25D LP gearmotor with encoder should give many more encoder ticks than that when rotating at 11 RPM.

Since the jrk can only count full ticks, this can be rounded up to 11, which leaves you with a minimum of 2037 and a maximum of 2059. If you want a larger range of feedback, you might consider increasing your PID period (e.g. changing the PID period to 50ms will change the minimum to 1993 and the maximum to 2103).

Thank you very much Brandon. Manage to get the PID working and the motor runs smoothly after some tuning.

Ill be connecting it to a Arduino microcontroller through TX RX. I hope I can continue this forum chat with you if i do run into any problems then.

By the way, is there a reason you want the Arduino to monitor the signal separately? Depending on what you are trying to do, one solution might be to use the “Variable Reading Commands” to read the scaled feedback value from the jrk and use that to determine the speed it is reading.

Thanks again Brandon for the speedy feedback. Yes im already using the command variables to determine speed and such. But the counts is mainly to do angular movement, i want to move and stop the motor at certain angles. And im using arduino to pair up with MATLAB to design a graphical user interface.

Hi there Brandon, I have another problem which needs your help.

Im able to obtain the feedback reading through the jrk using my arduino and the value is correct, and if i read the current reading solo without the feedback code it gets the right value as well. However when i try to obtain them both at the same time the values are wrong. Mind having a look. 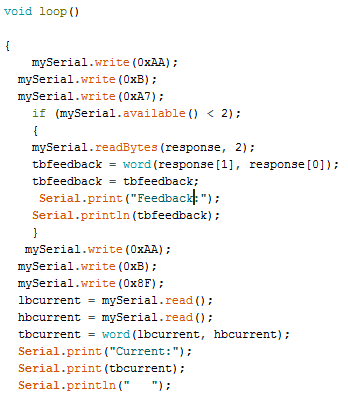 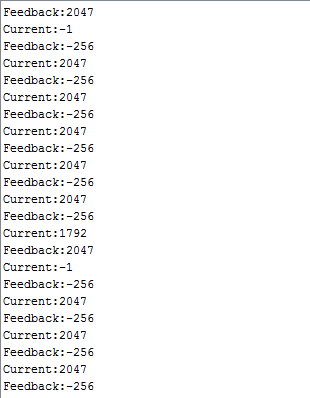 Thank you for posting your code. I suspect you are trying to read the return bytes before the jrk has a chance to process the command and return the corresponding bytes. You might try adding a small delay (maybe 50ms) after sending the get variable command to see if that fixes it.

Alternatively, you could try putting a while loop that waits for the response bytes just after sending the read variable command. For example: