I’m controlling a bipolar stepper motor using Maestro 12-Channel controller connected to a DRV8825 Stepper Motor Driver Carrier. The Maestro is being controlled by a VB6 application using a serial interface. When I send a series step commands the stepper motor moves in one direction for a few pulses and then it moves opposite direction for a few pulses. I’m sending chr$(0) to set the driver low and then I’m sending a chr$(254) to set the driver high. I’m using a 2 millisecond delay after the set low command and after each step pulse. I know if I increase the delay the motor stops tuning. Anyone have any ideas?

I am sorry you are having trouble with you project. Can you post some pictures of your setup and a wiring diagram? What is the current limit on your DRV8825 stepper motor driver carrier set to? Have you tested your setup using the Maestro Control Center? What are you using to supply power? Also, please post the VB code you are using.

Attached are the pictures of the setup and the VB Code. I don’t have a wiring diagram. I’ll work on one tonight and put in another post.

Keep in mind that the VB6 code is from a commercial application I’m producing so there maybe some references to functions and/or procedures are missing.
StepperMotorProject.zip (346 KB)

Attached is the project’s wiring diagram… 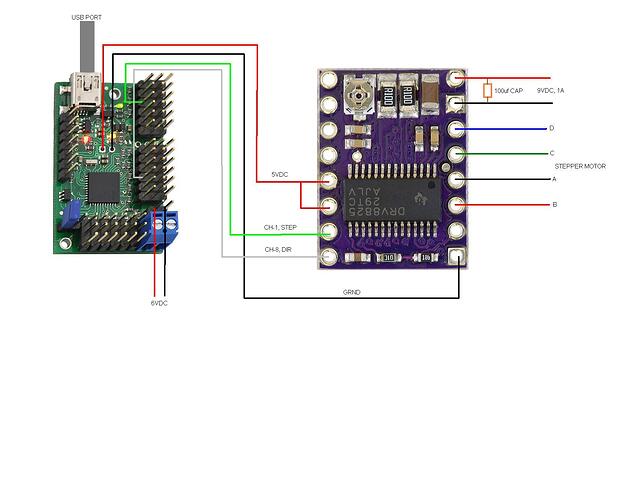 I tried setting the current limit again with my old volt/ohm meter (my new digital meter does not work for some reason). This time I saw values from .75 volts to 3 volts. Right now I have it set at 1 volt. However, I’m seeing the same behavior.

Here’s a revised wiring diagram. I found a mistake in the label for the Step Channel. 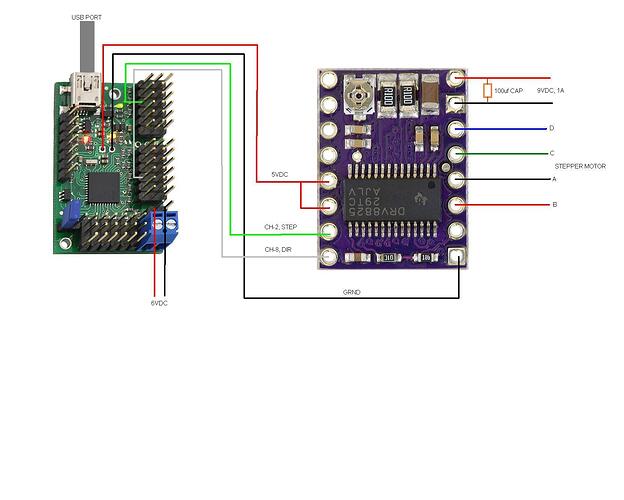 How The Software Works

Each position is contained within an event. Each event can contain as many as seven components (Pan, Tilt, Dolly, Focus, Arm-Horizontal, Arm-Vertical and Rig). A position can be an integer between 1 and 254.

Here’s the sequence for moving the stepper motor:

Here’s a link to a video of the stepper motor’s erratic behavior: 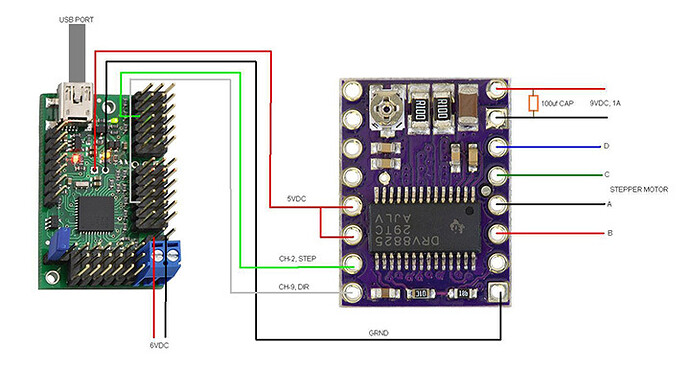 I figured out what was causing the problem. I noticed instructions for connecting the stepper motor to the driver did not match the DRV8825’s wiring diagram. Once I changed the motor connections to match the DRV8825’s wiring diagram the motor started working correctly. I also changed the the code for switching to the reverse direction from chr$(1) to chr$(254).

Man, all that for just a simple mistake in the instructions.

I am glad to hear you found the problem. Thank you for letting us know.

Thanks very much for your help. Your request for more information in what lead me to discover the cause. Now all I have to do is add micro switches at each end of the camera slider to prevent the stepper motor for damaging the slider if it end the end. Plus, I need to put rubber cushions between the stepper motor and the sliders driver system so the motor wont shake the camera to pieces.