I’m having some trouble with some Pololu DRV8825 stepper drivers. The drivers are being used in an AZTEEG X3 PRO board and are running a custom build delta 3d printer. I’ve been running a 12v PSU for over a year and never had an issue, however when I upgraded my PSU to 24v (Mean Well SE-600-24 from a reputable US source) I started to experience some trouble.

The symptoms start after an hour or two of printing. One of the motors stops responding. The first time this happened, I restarted the printer and saw a puff of smoke. (note I do have a heat sink affixed to the top of the chip with thermal epoxy) The DRV8825 VREF pins on the chip were charred and measuring the potentiometer read 0 ohms as I suspect the charred pins were creating a short.

Well, that was last night, I replaced the chip with a spare that I have, re-adjusted the current limiter to where it read 1.3K off the bottom left and top leads and turned down the PSU to under volt it at 22v.

Today I ran the printer for about 3 hours, when I came back the prints completed fine, but 1 of the 3 motors were not responding again. I pulled the affected driver and found that it too was now reading 0 ohms, and it smelled burnt.

I’ve got 1 spare driver left, but I do not want to use it if it’s going to simply blow again. The product page shows an output voltage of up to 45v, but what about input voltage. Is 24v too strong for the DRV8825? I thought that they were supposed to have overload protection.

Could it be a specific stepper motor issue burning out the motors?

It was two different motors which failed between yesterday and today.

Any help or insight would be appreciated. Obviously it could be the board, motor, psu, stepper driver, or even load on the PSU causing some feedback however I do not know where to start, other than buy more drivers and fire insurance

I should add that my vref is 0.5vwithout a motor connected.

Could you tell me the current ratings for your stepper motors? Does your system have an electrolytic capacitor, like the one shown in our DRV8825 carrier’s minimal wiring diagram, across the motor power leads of each stepper motor driver? Could you also post pictures of your setup and close-ups of the damaged boards? 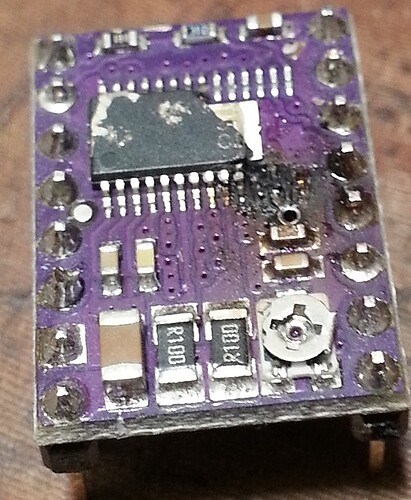 There is a capacitor placed at the positon located in the schematic.

From the burn marks, it looks like there might have been a short to VMM. What size capacitors did you use? Could you post pictures of your setup that show the connections for the DRV8825s in your system including the capacitors?

I think your right about the short, I tested a few other chips and found resistance when I applied the probe to the ground and heat sink. I suspect that the non-conductive epoxy (arctic silver alumina) somehow became conductive and after passing more volts through, created an arc.

I took off all my heat sinks and noticed that 3 out of 6 stepper drives had scorch marks. I was able to find that drivers with the scorch marks also measured some resistance across the heat sink and ground.

Here is a pic of the board

What range of input voltage is max for these chips.

Thanks for posting those pictures. The capacitors in that system look okay. It is possible that something related to the heat sinks might have caused a short.

The DRV8825 stepper motor driver carrier has an operating voltage range of 8.2 V to 45 V.