I’m currently using a DRV8825 to try and drive a 42×38mm NEMA17 stepper motor (#2689). However current limiting Vref is not acting as expected when the potentiometer is turned and I am unable to get any output from the driver.

I only needed to use the full step mode so I wired the driver up to an arduino uno and a variable power supply at 10V according to the wiring diagram on the DRV8825 description page. I currently have the 5V logic side sourced from the arduino’s 5V pin and a common ground between the motor and logic sources. The DIR and STEP pins are connected to the arduino’s pins 8 and 9 respectively so that I can use the DRV8825’s arduino library.

Here is an image of my setup. Note no motor is connected as I was just checking the driver’s output with an oscilloscope (the probe can be seen in the lower right corner). 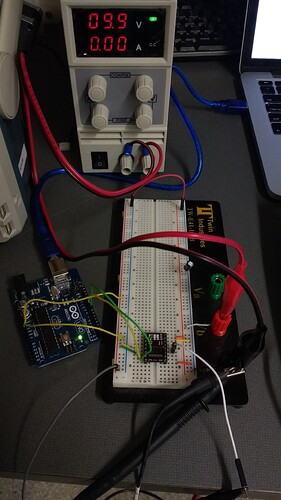 Given that the motor I’m trying to drive takes 2.8V, I attempted to set the current limit according to the product guide. I turned the potentiometer 3-4 rotations clockwise and counterclockwise but could not find it’s limit - it just kept on turning in both direction for with no resistance while the vref alternated between 0V and ~150mV. This seems pretty suspicious but eventually I left the vref at ~150mV and moved on to see if I could get any output from the driver.

When running some slightly modified example code from the DRV8825’s arduino library I can see 15us pulses on from the arduino on the STEP pin, but nothing from any of the driver’s outputs.

The connections in your picture look okay, but if the DRV8825 is working properly, you should se a much wider range of voltages when you turn the potentiometer. Those potentiometers do have small end stops, but they are very easy to push past and then it is normal to be able to turn it continuously. The actual usable range for setting the current limit is only around a quarter of a turn though. How are you measuring the VREF voltage (e.g. where on the board, with a multimeter or your scope)?

Something I noticed in your picture is that your electrolytic capacitor is far away from your board. To really be effective, it must be placed as close as possible to the VMOT and GND pins on the driver.

Thanks for your advice! After moving the capacitor didn’t change anything I soldered the pins onto another DRV8825 I had and I was able to set the current limit properly and drive the motor.