I’m a soldering newbie and recently purchased a butane soldering iron made by ECG. In the month or so that I’ve owned it, it hasn’t even been turned on for an hour in total, and the time I’ve spent actually soldering something with it is a fraction of that. And yet look what happened to the tip: 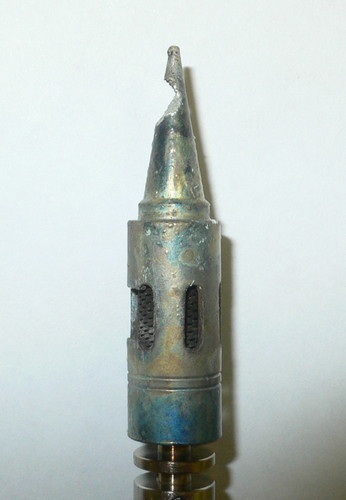 That cavity started small and just kept getting bigger and bigger. Now it looks as if something took a bite out of the tip. Maybe something corroded the metal, or perhaps part of it just melted away, I don’t know. I’ve never seen anything like it, but then again, this is my first experience with a soldering iron. All I know is that if I continue to solder with this tip, the cavity will get so big that the little piece on the end will fall off completely.

Is this normal behavior, or is my soldering iron defective in some way? Thanks.

I have almost no experience with butane soldering irons, but the one in your picture sure doesn’t look very good. I would question the temperature and the flux you’re using. What kind of solder are you using, and do you have any idea of what the tip temperature gets to when you’re using it?

What kind of solder are you using

and do you have any idea of what the tip temperature gets to when you’re using it?

The literature says that the soldering iron tip is rated for 410-850 degrees Fahrenheit and is equivalent to a 70W electric. I always keep the temperature/fuel adjustment slider in the middle of its range.

My concern is not so much a defective product but that I’m doing something wrong to cause the defect. I don’t want to inadvertently cause the same problem after getting a replacement tip.

I spoke with a salesman at the electronics store where I bought the kit, and he suggested that the problem might be a cheap tip. He said that higher-priced tips use better alloys or something and aren’t as susceptible to the corrosion/melting problem I experienced.

He also said that I might have just gotten a tip from a bad batch, and if I simply get a replacement of the same type I might have better luck. So that’s what I did, since I didn’t have the choice of buying any other tip anyway. Turns out that the manufacturers have incompatible interfaces! I can’t, say, grab a top-quality Weller tip (or whatever) and use it in my ECG iron. It’s frustrating that soldering iron manufacturers are using the same sneaky sales tactics as the razor blade people.

Yes, they all do that, with electric irons as well.

If you’re looking to keep expenses down, I’ve had good luck with the Radio Shack butane soldering iron ($20, replacement tips $10), but I would only really use it for things like connecting wires. I don’t like them for electronics, since they do tend to put a lot of heat out to the sides from those vents.

If you’re interested in going electric, you should check out this discussion. I’m still happy with my $20 Velleman at home, but if I didn’t have nice ones I could use at work I would totally spring for one of the ones Jan is suggesting.

I don’t like them for electronics, since they do tend to put a lot of heat out to the sides from those vents.

Yes, I’ve encountered that problem as well. After soldering on a header to a circuit board, I turned it over and noticed that the edges of the header had partially melted due to the excess heat. That can’t be good for the chips on the board. I suppose electric irons are much better in that respect, even though they are corded and take longer to heat up.

If price were not a major concern and you just wanted to buy a really good iron, what would you get? The Weller WES51?

I would get that or another Weller, but just because I am in love with this one particular spade-tip that Weller makes. Other than that anything that heats up quickly and has digital temperature display is just fine.

If money were REALLY no object, I would pick up some irons from Hakko. They have a couple of tweezer-style irons with lots of weird attachments like hot-tip tweezers for removing surface mount components or hot parallel plates for lifting chips off boards. They’ve got some neat (and sometimes disturbing) product videos on their way too media intensive website.