Robotics and electronics discussion Share your projects
chrisptx August 8, 2013, 1:41am #1

I’ve got my Raspberry Pi controlling my Dagu 5 Rover through the UART TX pin on the Raspberry Pi GPIO, and all is well so far with my project. The Pi sends properly-formatted commands to the Pololu TReX Jr motor controller through its serial port.

The Raspberry Pi is sitting atop and being powered by a PowerGen PGMPP9000-BK 9000mAh Battery Pack, which has another available USB power output that I can use if I need to. It can run the Pi for several hours without needing to be recharged. It was made to recharge cell phones and can put out 2 amps on one USB port, and .6 amps on the other.

I’m able to drive the rover around using an Android app I wrote for my Samsung Galaxy 3 smartphone. I can take pictures using the Pi’s camera, and display them on the smartphone, so it’s kind of like driving a rover on mars except the delay in the images being displayed is only 2 seconds instead of several minutes. I’d like to get full-streaming video working as well, but for now, I’m happy with what I’ve got working so far.

Here are a couple of still pics of it: The second pic shows an X-Mini II XAM4-B Portable Capsule Speaker that I hooked up to the Rasperry Pi’s speaker output. I have it playing bark and meow sounds to torment my cat, and it freaked her out at first, but now she’s pretty much immune to it… It’s got a built-in rechargeable battery so it doesn’t take any power from the Pi. 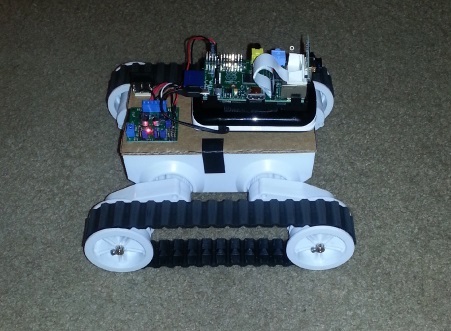 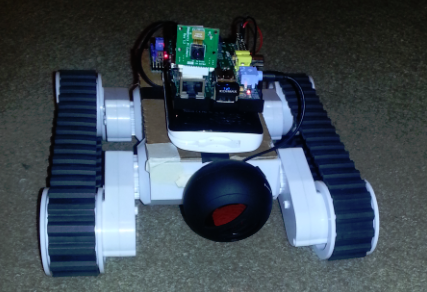 I added a “Share” button which allows me to share a picture I just took with the rover with other people using the phone’s built-in email capabilities. It currently has slow, medium, and fast speeds that you can set via the controller options. I might add a slider control to control the speed in the future… 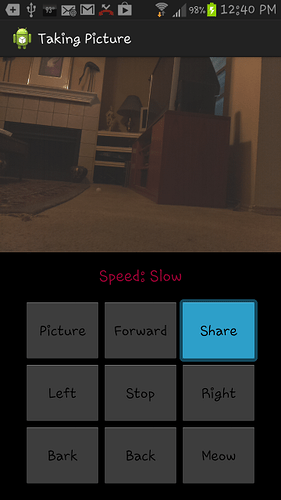 And a video of it in action: Dagu 5 and Raspberry Pi

Thanks for sharing your project. It looks really cool! We will be adding it to our Community Projects page.