So I just uploaded the Simple Line follower code onto a brand new 3pi, but change the code so that the 3pi would follow a white line instead. It worked for just under a minute then the 3pi started to spaz out. And by that, I mean that it started to spin in a circle exceptionally fast. So I turned it off and on again. Since then, the IR sensors have not been working. They don’t give any reading except 2000 when the code is set to follow a white line and 0 if black. I tried running a hand under the sensors to see if the values changes but I got nothing. It’s as if the sensors just died. But I don’t know why they would have :S

Can you also post a close-up, high-resolution picture of the bottom of the robot (one where it’s possible to clearly see the five reflectance sensors and associated components)?

There are a few things that could be wrong:

Thanks so much for the help, I am getting some readings now. What I did was, turn it on and while calibrating I tilted it at the window so the sunlight would hit the sensors. Seems to have woken them up. I also removed the PC5 shorting block. Took a while for the sensors to be fully responsive.

However it only now seems to work if there is direct sunlight. It still can’t tell between a white of black surface. Which is weird. 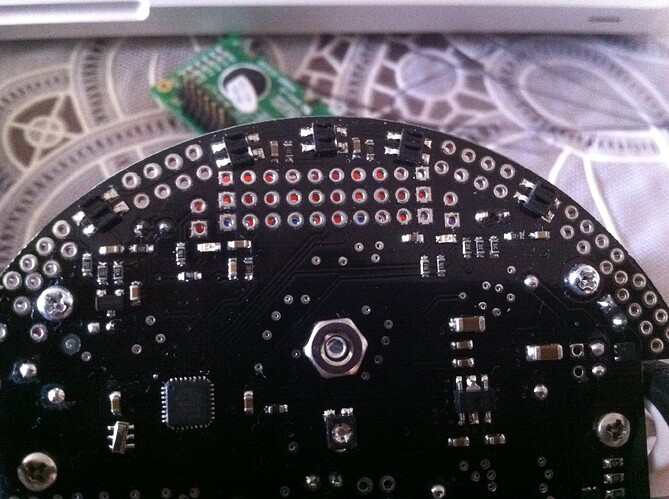 Seeing a response to sunlight is not a sign that the sensors are working properly, only that the detectors are working. There could still be a problem with the IR emitters, which is one explanation for the behavior you’re seeing (another would be improper calibration). Can you please post a picture like I requested so I can see if you might have accidentally knocked a component off the board? Also, can you follow step 3 and use a digital camera display to see if the emitters are on?

Edit: It looks like you just edited your above post to add a picture of the board. Thank you.

yeh, my internet cut out halfway through posting. I tried the mobile camera test, using different cameras and still didn’t see anything from the sensors.

Do you own a multimeter? If so, I can give you some suggestions about how to use it to find out if and where the emitter circuit might be broken. Also, can you look closely at the emitter solder joints and see if any of them look like they could be bad?

Hi, yeh I do own a multimeter. But never really used it before or had to. The more instructions you can give the better. Really appreciate it. I checked the solder joints and it looks ok to me.

Here is the circuit for the IR emitters:

And here is where the relevant parts are on the bottom of the 3pi PCB:

Basically, they are a five IR LEDs in series powered by VBOOST. Two 220 Ohm resistors in parallel act as current limiters, and they connect to ground through a MOSFET that is controlled by LEDON.

With the 3pi off, can you verify that there is continuity between the pad labeled VBOOST in the above diagram and any other VBOOST access point on the board? Can you also check to see if there is continuity across all five LEDs (because the LEDs are diodes, your multimeter’s continuity check will only work in one of the two possible ways you can connect your probes). If not, can you start narrowing it down to find out where the continuity break is?

With the 3pi on, can you check to see if the LEDON pin voltage is 5 V? Also, can you verify that the region outlined in white in the above diagram really is being connected to ground through the MOSFET (e.g. do a continuity check between any of those circled pads and ground)?

Please let me know if you don’t understand any of these instructions or if you need help using your multimeter.

I have the same kind of problem. When I got my 3pi, it didn’t want follow black lines. Demo program showed that the sensors are working, but with line following program my 3pi only could follow the line if I put a light front of it. And I tried different programs and always was the same thing.
So I followed your advise and at first looked with my phone camera and saw that IR sensor are not working, but at the same time the IR sensor on my tv remote worked. So I tested with multimeter for the continuity and everything was fine. After turning 3pi on I discovered that after 5th or U8 sensor voltage fell to zero, but before the sensor it was about 6V. Then I shouldered a bypass on the IR LED and after that everything works and 3pi follows the line perfectly.
My question is what are my options with broken IR LED? To I let the bypass (a wire) to stay there or I have put there a resistor or is there a possibility someway to repair the sensor?

I am sorry you are having trouble with your 3pi. It sounds like the IR emitter from the U8 sensor is damaged. The way you have it right now with the bypass should probably be okay. The current through the working IR emitters will be a little more and they will be a little brighter, but I don’t think it should hurt them.

To completely repair the 3pi, the sensor would have to be swappped out. If you are comfortable with SMD soldering, we can send you a couple replacement sensors. If not, we might be able to repair it or offer you a discount on a replacement. Please email us with your order information, referencing this thread, and we can help you out.