I need motor drivers for some Shayang Ye IG-52 24V.

I like the VNH5019 but I wonder if it would protect the motors if they become overloaded.

Here is a graph about those motors characteristics.

If you think VNH5019 is over requirements, what product would you recommend ? 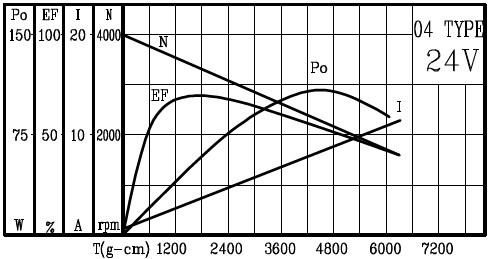 The VNH5019 looks appropriate for that motor, but you should not count on having it automatically protect your motor from damage should you, say, stall it. You can use the driver’s current-sense feedback to tell if your motors are drawing too much current and command the driver to scale back the power in such cases, or you could possibly put a fuse in line with your power supply.

I melted a brush holder with a motor driver that is rated at 43A. This driver is obsolete now.

Sabertooth cuts power for some time until it cools a bit. Works real fine but I think it is a little expensive.

I intend to use POLYFUSE® Resettable PTCs from Littelfuse and try from 6A up until I find the right one but having it trip will cut power completely until it resets automatically.

How would you scale back power, simply with a shorter period?

Note that the Polyfuse devices will have a significantly higher resistance (and trip more easily) after the first time they trip. They are a good way to avoid customer returns from the field for consumer electronics, but they are not a robust general purpose overcurrent protection device. You might want to try an auto-resetting circuit breaker such as used in cars instead.

To make the controller lower the power, yes, you specify a lower PWM duty cycle.

I will take this into consideration