I removed the 1182 from the circuit and used an ohmmeter to check the resistance of the input pins w/rt ground. It looks like the GND and DIR lines are basically short circuited — there’s less than 1 Ohm across those leads. the STEP/GND on the 1183 and the STEP/GND and DIR/GND on the 1182 have ~1M Ohms.

I don’t have a second 1183 to compare against, but I will order one shortly. The setup is pretty basic — power supply, drivers, Wixel, and motors. I’m not using microstepping, and those pins are floating. All of the soldered headers look pretty good. (Pictures attached.) Is there something I could have done to cause the problem, or is this possibly just a defect? Thanks! 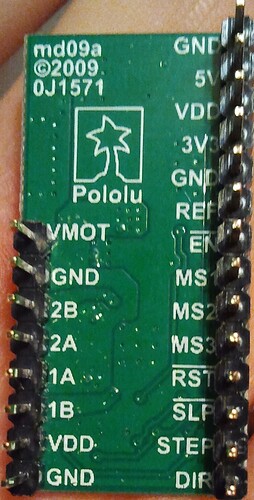 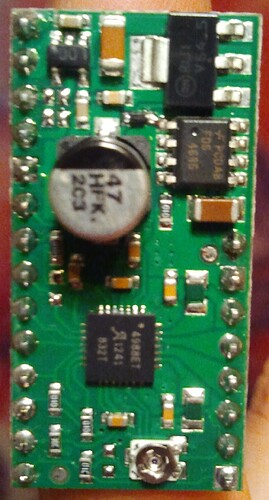 Strikes me as unlikely to be a defect. They do test the boards before, and are quite standardized in the production.

But, may i ask, just to confirm, you found that short when you tested the A4988 out of circuit from the wixel? Just the board by itself? Because that will narrow some things down.

@Tomek
I took the resistance readings while the chip was completely removed from the rest of the hardware. The Wixel unit appears to be working fine.

I’ve never had problems Pololu hardware (that I didn’t cause myself), so I’m not assuming that it’s a manufacturing problem. However, a short between the pins doesn’t seem like it could be caused by losing a connection during operation, so I thought I’d ping the forum.

Thank you for the pictures. I don’t see anything obviously wrong. I think this is unlikely to be a defect (as Tomek said, we test all the boards before they ship), but it does sound like that pin is damaged. Is there any chance you zapped it with static electricity or accidentally touched it with a voltage outside of 0 to VCC?

If you email us with your order information and mention this thread, we might be able to get you a discount on a replacement.