I’m trying to build a 6-axis device driven by 6 NEMA 14…17 stepper motors. I want to control this device from a Raspberry PI.

and POLULU seems quite adept at providing solutions for multiple-axis stepper projects.

So, can anybody help me out by telling me what I need here?

I would think you need a beefy power supply to drive six steppers. Dunno if Pololu is right for that one.
Then you need six stepper drivers. Try the 8825: pololu.com/catalog/product/2133
Then you need some wiring from the RPi GPIO ports to the stepper drivers. Try the pre-crimped female-to-male wiring: pololu.com/catalog/product/2007
I think there are 12 available digital I/Os on the RPI GPIO. You need two for each stepper: step, and direction.
This is assuming that the stepper drivers accept 3.3V I/O, which it seems the 8825 does.
Then you need a bunch of mechanical assembly, screws, armatures for holding the motors and whatever they drive, axle shaft couplers, etc – all of that depends on what you actually want to do with your 6 steppers.

Hi, jwatte, and thank you for your intro! The 8825 is exactly what I was looking at when I decided to take a look and see if I got any replies yet

but is this enough?

To answer your input: this project is a camera omni-head with 3 degrees of freedom, plus one more degree for traveling/dolly and two more degrees for controlling zoom and focus. This accounts for 4 NEMA 17 steppers capable of 4.8Kg-cm holding torque and 2 NEMA 14 steppers capable of almost 1Kg-cm holding torque. Yes, I know, some serious power gulping. This WILL require some external power, for sure. I get a sense that I’m going to have to power the motors with dedicated juice. I’m planning to make this “robot” portable and to power it from a solid 12V battery - with some power regulation.

So far, I found some Chinese drivers that are way too bulky - especially considering I need 6 of them. Plus, I am lately aware of all kinds of problems that can occur when the steppers approach the spec’ed holding torque or higher speeds - you can take a look here and see what I mean: http://www.youtube.com/watch?v=2SozZ7af3wg. What I’m looking for is a driver solution able to control and drive 6 steppers and which is compact enough - one that I could carry in my back-pack when hiking/trekking - and smart enough to operate in a way similar to what you saw in that video (able to avoid stalling, to run at high speeds, to “remember” where it needs to go etc.)

I am at the very beginning of the road in terms of robotics, so any pointers / guidance / help is very welcome! 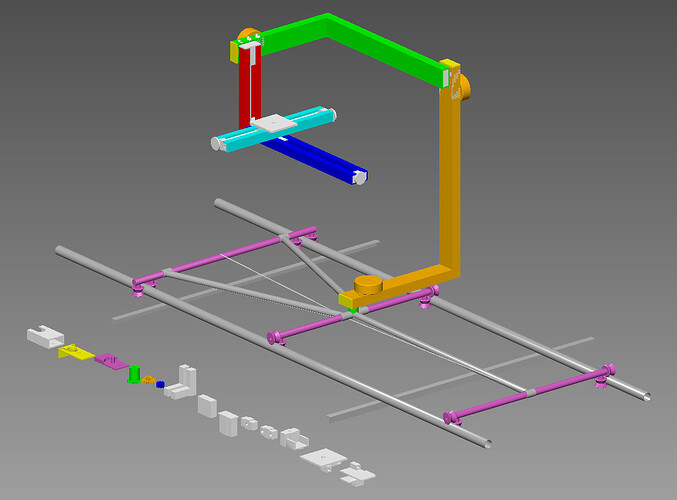 I found a candidate driver for my 6-axis configuration:

What I like about it is that it has stall-detection, is load-dependent and is ready for a decent programming language.

What I still don’t understand is if that driver is everything I need between the PC and the motors… Does anyone have any idea?

but is this enough

The magic value you need to understand is the power draw of the motor, in amps. As long as that is matched to the driver, you should be OK – “running” current draw should be less than, say, 1/4 of the rated power of the driver, and ideally the stall current should be at or below the max set point of the driver.

You don’t need regulation to drive the motors, as long as your voltage is well within range of the driver’s ratings. The driver should be properly chopping the current so it’s limited to the set max limit. Higher voltage just means you get more starting torque.

That particular controller: It has USB input, so that would be “enough.” But look at this specification:

Yes, you should use a dedicated power supply for those motors. How many volts and amperes needed depends on your motors. If you use LiPo or LiFePO4 batteries, aim for 4S LiPi (14.4V nominal) or 5S LiFePO4 (16.0V nominal) but there should be significant room for variation. You want high-capacity batteries, which means you can draw more amps out of them; for LiPo you can also get “high C” batteries that allow higher draw as a multiple of capacity (“C rating”) although that won’t get you very long runtimes.

Hi again, jwatte, and thank you again for a comprehensive reply! I still have a couple of questions for you, if that’s OK

First, to describe a bit the working regime of my project: it’s a “time-lapse robot”. This means that I will be using it in 2 modes:

Well, it looks like jwatte is pretty busy these days. But I haven’t been sitting idle and I have apparently found the answer to my questions: Megatronics V2.0

I think I’ll go ahead and try it.

I personally would feel most comfortable running it this way, because of simpler code and more tutorials:
[I suspect you’re like me, not yet super pro at everything in this realm, but trying to tackle relatively big projects]

Thank you for the suggestion. However, the baby orangutan breakout board only supports 2 motors, while I need to control six of them, plus 4 brakes. And I’m zero at designing electronics

This is where I am, right now, with the config:

As of right now, my main concern are the Pololu drivers, which are ok but not very smart (no encoders or feedback). Here’s a thread I just started on reprap, about the idea of using smarter driver chips for Pololu-compatible breakout boards… http://forums.reprap.org/read.php?88,186139,186141#msg-186141 - hope it’ll yield something good…

pololu.com/catalog/category/12
Try this for your computer control it’s not just a servo controler and a one stop shop answer for nearly everything. You could even put 3drs wireless telementry transevers to it tx and rx lines. low power sleep mode just yum.
diy drone have the sdk programe and data sheets for the 3dr telementry.

Hi, Tomek,
Thank you for the suggestion. However, the baby orangutan breakout board only supports 2 motors, while I need to control six of them, plus 4 brakes.

Hi erosnicolau, the baby orangutan would be used in addition to six DRV8825 or A4988 black edition drivers. It would be the “real time” brains behind the commands sent from the raspberry pi.

It’s actually a suggestion similar to the megatronics board. I think megatronics is a perfect application of utilizing the reprap/3Dprinter developments. You can even run repetier-server to interface and remotely send the commands to the project.

As for drivers with positional feedback, just make sure you read the fine lines of what its capable of. Most that I’ve seen can only monitor rotations faster than 500steps/second, because there’s not enough back EMF (the stepper analogue of back emf, or whatever it is called) for anything lower than 500steps/second.

Anyway, I already ordered the Megatronics…

As for drivers with positional feedback, just make sure you read the fine lines of what its capable of. Most that I’ve seen can only monitor rotations faster than 500steps/second, because there’s not enough back EMF (the stepper analogue of back emf, or whatever it is called) for anything lower than 500steps/second.

Wow, wasn’t aware of that… I had just discovered a driver that sounds amazing and comes in an affordable package (albeit double price as compared to the Pololu High Current one, but apparently worth it): the Trinamic TMC260, mounted on an Arduino shield and named TOS-100: http://www.motioncontrol-community.org/?page_id=353. You’re saying that I should double-check before cashing out double the money… and I will

One more question: aren’t hall sensor encoding position sensors limited by the graphic resolution of the film, and hence provide only a limited amount of finesse positioning?

There are linear optical sensors, which are limited to the resolution of their film. But, that can be very high, because they use high resolution x-ray film. There are even higher resolution capacitive sensing linear sensors, like digital vernier calipers (sorry I don’t know much about them besides that they exist.)

However, what I was suggesting is a typical grey-code rotational sensor like Pololu has on the back of their gearmotors+encoder. Those can be rather high resolution, depending on how you design it. At the least, you can use a rudimentary one it to see verify that your stepper is not skipping, and in turn, count your steps. The biggest problem with one of those in your application that I can imagine is that keeping track of the interrupts from 6 linear rotational encoders must be fairly processor intensive. Might not be suitable for a 20mhz arduino.

Hi, Tomek,
Can you give me a link to those encoders you’re talking about, so I can take a closer look?
I do have access to high-resolution x-ray film printing, so i CAN, in theory, print out pretty fine-print encoder scales…

About the numbers: Ideally only 2, possibly 3, at most 4, of the motors will need position feedback with encoders. Should we detect that the Arduino can’t handle the maximum of 4 at once, we can easily program them to run in pairs…

I am not sure what exact one we used at work (I am back at Uni now, this was from the last semester), but i think linear encoders like I was describing are quite common. For instance, a lot of scanners and printers use them, as do some of the hobbyist CNC people. What would suit your application the best, depends on your true requirements and application. For some reason, though, I think we used some quadrature encoders made from HP. Even if you have access to making your own film, I think it’ll be cheaper for you to buy the strips that go along with whatever system we use. After time and costs, and a loss in quality (it’s unlikely you’ll do it as well) I dont see any savings. Our workplace purchased the strips even though we used several hundred feet a year. It doesn’t make sense to produce your own unless you’re talking about much larger scales.

With the linear strips, you can have a dedicated quadrature decoder IC that counts the pulses and that way the arduino would have a much easier time dealing with the information. The linear strips have some benefit over rotational strips, but might require more structural support (again, depending on the specifics of your application.) So don’t forget to still investigate the regular rotational hall sensor systems.