I purchased 2 of the Pololu 37Dx52mmhttps://www.pololu.com/product/1102 (19:1 gear ratio) a few months ago and finally added them to my project a few weeks ago.
During initial testing they performed fine, then - seeming randomly - performance for both started decreasing dramatically (unable to move robot (<10lbs) where they had no problem before, without any load and at maximum power both still spun very slowly). Now one of them has stopped functioning completely while the other is barley able to turn.
I disassembled the gearbox on the non-moving one and everything appears to be in good shape, no stripped/stuck gears. Both never ran near stall current so far as I could tell (at no point was the robot struck or struggling with the motors still on, nor were they ever really pushed to full power).

Suffice to say I’m pretty sure they are dead - I suppose my question is any other troubleshooting steps? Anyone else had a similar problem/solution?
I’ve never had motors just fail like this without some trigger event - especially when brand new - and given the $25 a piece cost I want to make sure there’s no alternative fix before replacing them.

Could you tell me about how long the motors actually ran before you noticed the problems? If possible, could you open up the motors and post pictures of the insides including the brushes?

By the way, the amount of torque a robot should have depends on more than just weight (e.g. wheel diameter), and the 19:1 37D metal gearmotors do not have a lot of torque for that size motor. Your robot might be straining those motors. If this is the case, you might consider a higher gear ratio motor for more torque.

Total running time on the motors probably around 1.5 hours (split up into small increments).
As for the torque I did do calculations before selecting the gear ratio and estimated my maximum load would be around 55 oz-in per motor (I’m using 90mm wheels and 37D 19:1 max is 80 oz-in) since I was using it on flat floors. But I may have messed those up so I’ll revisit them.

Looking at the non-working motor a strand of the winding appears to have come off (hard to see in pictures but it is there towards the center) that did not in the other motor - but also one of the brushes has apparently been ripped off. I suppose that means it is definitely dead.
Given that do you think I over-torqued them? I suppose its always possible I screwed up an equation… 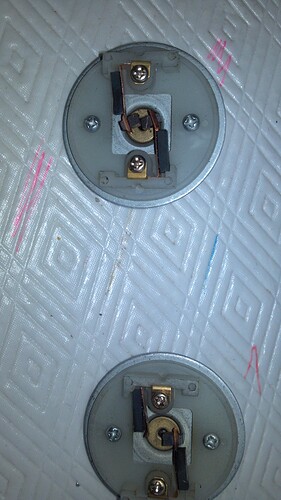 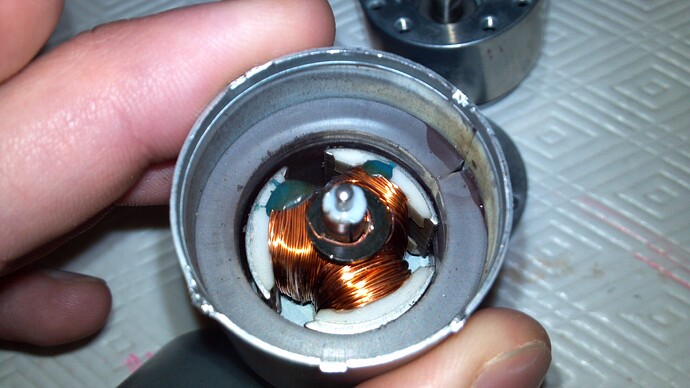 We generally recommend running our brushed DC motors up to about 20% - 30% of their stall torque, so you probably want to consider using higher gear ratio gearmotors. However, even under the 50ozin load you mentioned, I would expect those gearmotors to have a longer life than that. If you would like to try again, we can probably help you out with some replacement motors. If you are interested, you can email us at support@pololu.com with a reference to this post and your order information.

By the way, based on a torque of 50ozin per motor, it seems like your robot would weigh significantly less then 10lbs, so you might want to double check your calculations.