Hi folks. I have a strong feeling my question has been asked before. Anyway, I’m in the process of assembling my zumobot with zumo shield and UNO R3, and am encountered a small hurdle. When I attempt to dock the UNO R3 to the zumo shield, the ‘charge connector’ of the zumo shield occupies the same space as the black-coloured power jack on the R3. So at the moment, it’s not possible to connect the header pins of the zumo shield to the UNO R3. Is this expected? If so, then do I need to remove R3’s power jack? Thanks all.

No, when the charge connector header is installed on the Zumo shield, the shield should still be able to mount an Arduino Uno on top of it without interfering with the Arduino’s power jack. We do not have a close-up view that shows those two components, but you can see how they should fit together in this back view of an assembled Zumo.

If it is not clear to you what you might need to change in your setup to get those two fitted together, can you post pictures of your Zumo robot that clearly show the placement of your Arduino? I might be able to make suggestions on how to fix it.

Thanks for your time and for showing me the picture of the zumo shield docked with the UNO R3. Thanks to your picture, I finally figured out the reason. I’m still sort of a newbie at arduino, and when I bought my ‘UNO R3’, I purchased it from ebay. Only now I realise that my ‘R3’ isn’t ‘the arduino UNO R3’ as such. I discovered my ‘R3’ is a clone/spinoff. I’m thinking that it functions exactly like the genuine R3, although comparisons of photos indicate that the black-coloured power jack on my R3 extends out just a little bit more than a genuine R3. I didn’t realise all this before. What I may need to do is to remove the power jack on my R3 clone. Thanks again for your time Jon. Kind regards. Kenny.

Back again now! I’ve now removed the black coloured power jack, and the zumo shield can be docked to my clone R3 board. I think I will have to put some insulating tape (eg Kapton tape) around the metal chassis of the USB jack of the R3, to avoid accidental shorting of the metal lead of the zumo shield ‘user push button’ to the USB jack chassis.

[update - a little while later]

I have now attached a photo with the power jack removed, and yellow coloured insulating tape placed on the USB jack. The zumo shield is only partially docked for the purpose of the photo. The two boards are now dockable. The only remaining minor setback is - the #2-56 screws for fixing the zumo shield to the zumobot plastic case are slightly too short, making it impossible to clamp together the zumo shield, insulating gasket, and the plastic casing. I will need to purchase slightly longer screws.

[Another update - I found that 10 mm length M2 (ie 2 mm diameter shaft) screws are the perfect replacement for the #2-56 screws. The M2 screws actually work with the original nuts that came with the zumo kit, which is great.] 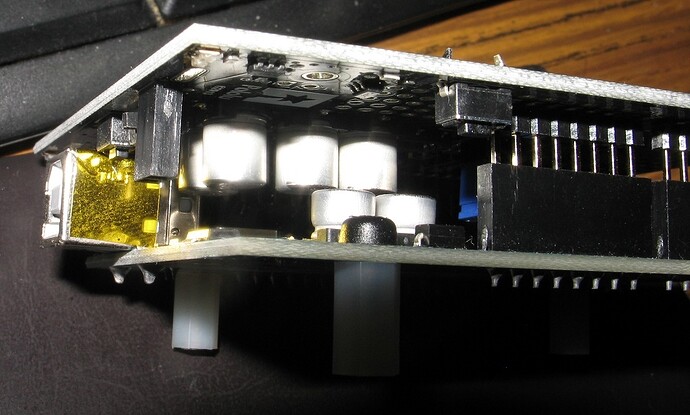 I am glad you figured out a way to get your Arduino clone to fit on the Zumo! Thanks for sharing a detailed description of what worked.

Most welcome Jon. Thanks again for posting that picture with zumo shield coupled to a genuine Arduino Uno R3. Very happy with the packaging of the zumo kit. Thanks Jon!