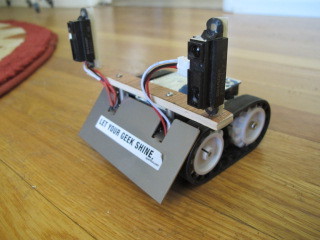 Showing ZUMO with 2 Sharp GP2Y0A21YK0F distance sensors mounted on thin plywood. Underneath are 2 QTR-1RC reflectance sensors. I have been able to run Zumo around on a white 30 x 40" cardboard with black tape around the edge. The 2 QTR-1RC detect the black tape, turn right or left a bit, and then continue forward. A single GP sensor detects my hand, and spins around a few times before continuing.

Now, to try something different. Use 2 GP sensors as shown and do this.
After buzzers sound, spin slowly, detect object, stop spinning for 0.5 sec, proceed forward at fast speed to object and shove it past the tape border. Then, back up, stop, spin slowly, and detect new object, etc. I got the code working, combining the distance in sort of triangulation, deciding if distance is about equal. Thus this must be the object to go for. I think maybe I have overkill here. Maybe one GP would work just as well? I still have reflectance sensors in the code.
Comments appreciated. 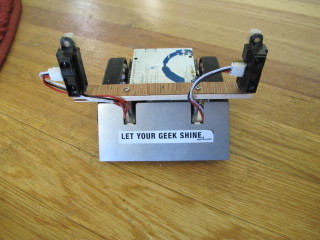 Looks very nice. I plan on using some of the smaller sharp sensors 2-10cm for robot smashing detection, i mean pushing.