I have a Zumo 32U4 robot and I’m using Arduino software to program it.

Things were pretty smooth and everything worked as presented within Zumo 32U4 Robot User’s Guide.

After a while I noticed that within Arduino software and Device manager my Zumo32U4 is not recognized as a Pololu A-Star 32U4 …it is recognized as Arduino Yun.

I have to mention the at the beginning I was able to select Pololu A-Star 32U4 entry within Arduino Boar menu.

If I press the reset button twice within 750ms in device manager the Pololu A-Star 32U4 bootloader is recognized.

Could you please explain me what’s happening and maybe solve me solve this issue.

Are you having trouble programming your Zumo 32U4 robot? It is not made clear from your description.

We have not heard of problems like that before. Can you post screenshots of your Device Manager showing the Arduino Yun device entry and the list of “Board” entries under the “Tools” menu in your Arduino IDE?

thank you for the quick reply.

I am able to programm the Zumo 32U4 robot. The issue is that it is not recognized as Zumo 32U4 please see attached print screens. I don’t know if all functionalities are as they should be.

I try also to delete the driver and re-install it. Did the same with Arduino … but still I experience the same behavior. 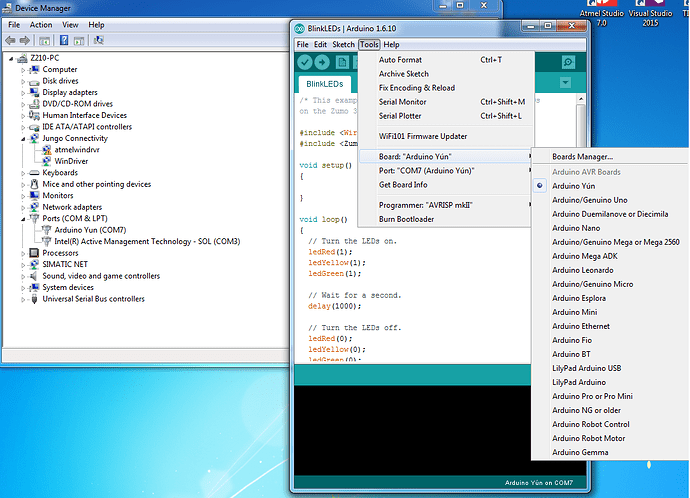 The second print screen is when I press reset twice within 750ms time interval to enter boot-loader mode. 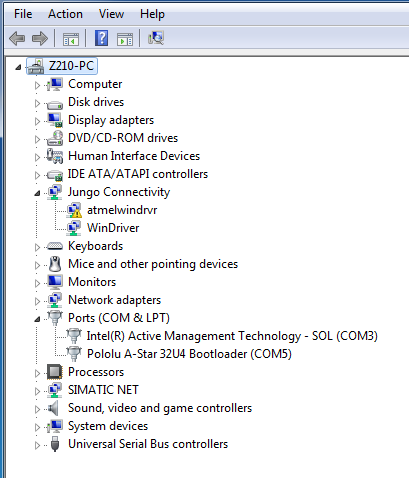 Any hints?
I will try on a different PC maybe is something wrong with mine.

To get the Zumo to be recognized correctly, you would need to reprogram it as an A-Star 32U4 by selecting “Pololu A-Star 32U4” in the Tools->Board menu of your Arduino IDE. However, since the A-Star 32U4 board entry is missing from list, can you try re-installing the text files we provide to add that board entry to your Arduino IDE? (If you are not sure, see step 2 under the “Programming using the Arduino IDE” section of the user’s guide. Please note that you might have to restart the IDE.)

If the problem still persists, can you post a screenshot of your “hardware” folder under your Arduino IDE’s sketchbook directory?

even if I don’t remember to programming it like a Yun…proposed solution works…thanks Amanda.