I saw this comic recently: xkcd.com/413/ and decided I would like to do something very similar to what is shown there. My problem is I’m studying programing and have little knowledge in robotics. I am confident though that once I get pointed in the right direction I can successfully complete this project.

I have found a hamster ball with a 13" diameter and the EeePC I will use is only 9" wide and 7" deep and high.
I would like 4 or 6 wheels and motors for this project. where the Wheels are controlled in sets of 2.

Now for my question.
For a project of this size and specifications, what controllers or electronics other then the EeePC would you recommend me to use?

Before you select your controllers or electronics, you need to figure out what motors you are going to use. Two of the key specs on motors are torque and RPM. To figure out the torque, you will need to make a rough free-body diagram of what your finished robot will be and how much the parts will weigh.

For the motor, I believe I would use 3-4 of these motors due to their size and power: pololu.com/catalog/product/996/ , 2 for drive and one or two to turn the bot. AS the laptop and ball will be about 1kg and the frame and other components I estimate to be anywhere between 2kg and 4kg. with a total weight between 3kg and 5kg.
I have yet to figure out which controllers/connectors I need if I want to use the laptop as the ‘brain’ of the bot.

Attached is a simple Design sketch of my changes to the comics design. 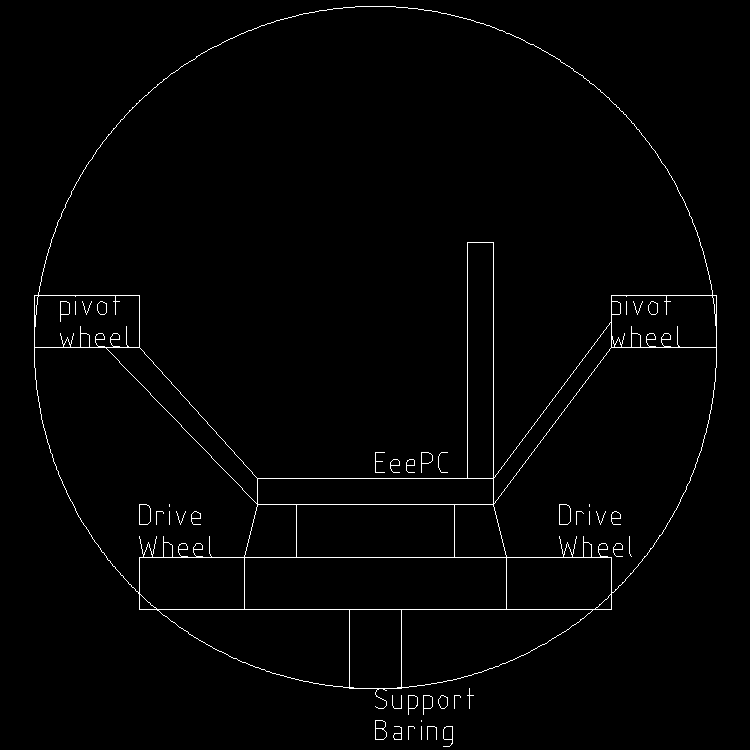 I don’t exactly see how you plan to turn the bot, can you be more specific about how that would work?

As for the electronics, you will want one motor channel for each set of motors you want to control independently. It seems like it might work with two channels and a differential-drive control style. It works best if you connect your pairs of motors in parallel with one another, so each motor channel will have to handle a maximum current of the stall current of the motors multiplied by the number of motors. The motors you chose have a stall current of 1.6 A at 6 volts, which means you would want a motor controller with two channel that can each draw at least 3.2 A.

For this, I would recommend the TReX Dual Motor Controller. It is a little over-powered on the current per channel, but it has a feature for mixing RC receiver signals into differential motor drive controls, which would be cool if you want to make your hamster ball radio controlled.

If you aren’t so excited about radio control, you could get the qik 2s12v10 dual serial motor controller, which has a nicer serial interface than the TReX, but no built in RC mixing.

With either of these controllers, you will also need a USB to serial adapter so you can interface your eeePC with the controller.

Additionally, you will need to power the motors and motor controller.

The four wheels are setup with two having an axle on Z axis to drive the bot forward, those are labeled drive wheel in the image. The two pivot wheels have their axle parallel to the y axis. That is my plan for moving and Turning the bot.

Thank you for the suggestions. I do not have the time right now to start the project but will continue planning and improving my design and drawing