Has anyone had problems with Wixels burning out. To the point where they smell? I have a situation where Wixels are failing at an abnormal rate. For the life of me I cannot figure out how. I have a custom shield that has a 100ma 5VR built in to supply power. The Wixel has two I/O pins that provide 3V output to two FETs being used as low current switches. The I/O pins are protected by diodes so no power can get back to the pins.

I cannot see how the Wixel would see any power back into the I/O pins, or how it would see high supply voltage from the VR? Yet I’ve had some Wixels fail and when they do it’s in a bad way… (Heat & Smoke)

I suppose it’s possible the 5 VR is failing and maybe then the Wixel sees high supply voltage and then cooks… But I cannot be sure why this would be happening.

It would help if you posted your circuit diagram. What is the input voltage to the regulator, and have you verified that its voltage output (which presumably is connected to Vin on the Wixel) is 5 V?

I’ve attached a drawing of the shield that the Wixel is plugged into. for the most part the shield only supplys power to the Wixel and it also uses two I/O pins designed to switch on and off some FET switches. I at first thought that some how voltage was getting back into the I/O pins and knocking out the controller, so I added diodes on the I/O pins and some 100K resisters to bleed the signal voltage off of the FET. I’m starting to suspect the VR is the problem but I’m not sure why it would fail to be honest… It’s working well with-in it’s normal op range…

The voltage regulator is this one… http://www.ti.com/lit/ds/symlink/lp2951.pdf And I have checked and verified that the VR supplies 5V to the VIN pin.

It is easier to make sense out of circuit diagram than a board layout, but I would suspect a bad or wrong connection (solder bridge) on or between the boards, before I would blame the regulator. Who produced the board and is it known to be reliable? Wixels don’t overheat in my hands.

I assemble the kits and test everything. The failures take place after a week or so of being in use. So I doubt it’s the board. I do not have a circuit diagram but I attached a drawing that simplifies the circuits. 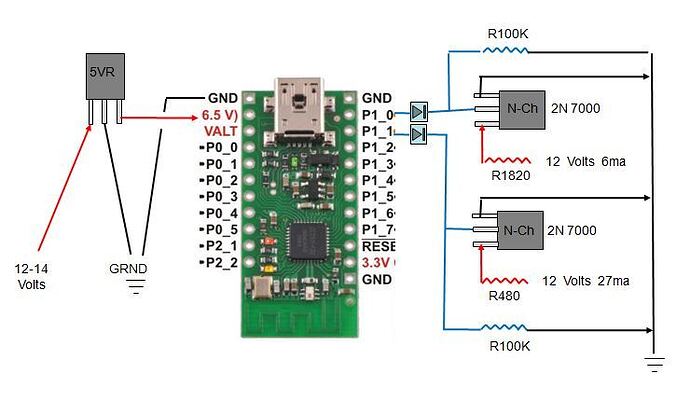 In short only 4 pins on the Wixel are actually connected to anything.

Something is causing the Wixel to cook… Everything works fine for about a week and then it just goes toast. This is really a simple circuit. Two FET switches and the Wixel…

I cannot understand why it would fail the way it does (Wixel smokes… and I’ve had six failures) I don’t get it. By the time I get the shield back usually the Wixel and the VR are bad. Question is whether the VR fails and takes out the Wixel, or the Wixel fails and draws more then 100ma and takes the VR out…

Anyway, Thanks for the response. I’ll keep plugging away at it.

Thanks for posting the diagram.That it takes a week or so to fail is very strange and suggests an infrequent event.

Is the 12-14V an automotive (or similarly noisy) power source? If so and it is unfiltered, you can expect occasional voltage spikes high enough to destroy the on board regulator. The first thing you might try is an RC filter (e.g. 100 ohms, 1000 uF), and/or a hefty 18-22V Zener diode to ground before the regulator. You can also buy filter kits from automotive stereo installers.

PS: does the antenna portion of wixel stick out beyond your carrier board? If not, expect some T/R range reduction.

Yes… The failures are odd to say the least. It is an automotive application. That’s why I was leaning toward it being power supply related also. There is another Wixel in the car acting as a transmitter and it does not fail like this Receiver is failing. The Transmitter is using a different brand of VR.

All this said, do you think it is at all possible to damage a Wixel in code? I say this because this set-up employs some code that will attempt to Reset the Wixel if it is running and the Radio is not picking up messages as expected. After 30 seconds or so the Wixel will trigger some watchdog code and reboot. Can you cause damage if this is done too often?

Given that the power source is automotive, there is no doubt whatsoever that it is the source of the problem. The alternator and DC motor switching can put huge spikes (40 V or more) on the “12V” supply lines. A filter prior to the regulator will fix the problem.

Code is among the very last things I would suspect.

Thanks for your help Jim.

The more I get into this I agree with what you are saying.

I’m going to stabilize the power supply and see if this resolves the problem.