I am posting to share with everyone a project that I’ve been working on for almost 3 years now. It has gone through several iterations, and this year I finally reached a point where I decided to start a company and sell what I’ve been working on. The summer after my freshman year of college I wanted to build a wall/ceiling traversing robot that used a ducted fan to generate suction. I had been into RC and robotics most of my life, so I went for it and started buying whatever I could buy with my tiny paychecks from my job at a fast food restaurant. Anyway, in an attempt to not make this too long of a story, here’s what I came up with: 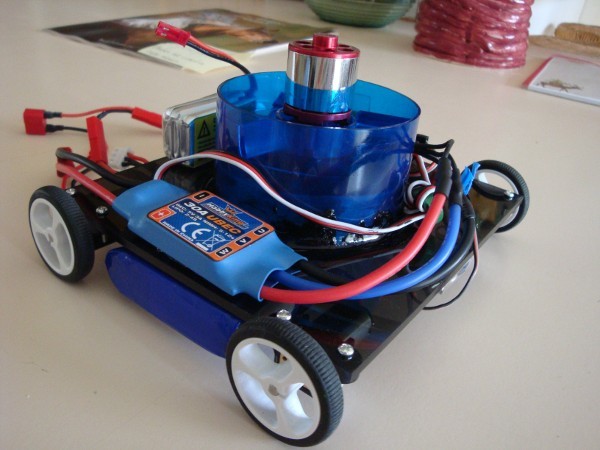 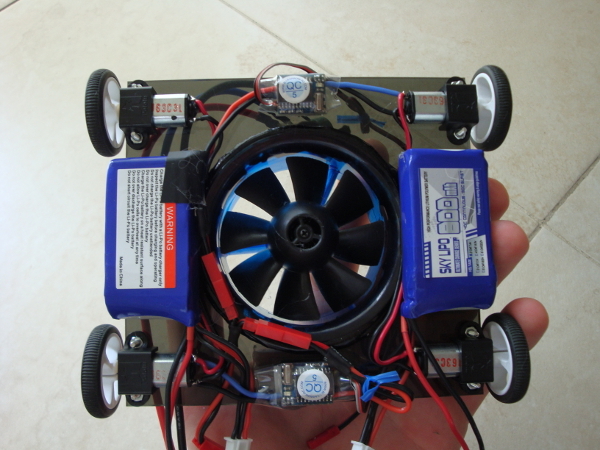 The wiring got pretty messy, but at the time I was mostly concerned with whether or not it would work. As you can see, I used Pololu motor mounts, Micro Metal HP gearmotors, and 37mm wheels. Without those super lightweight drive wheel components, I’m not sure how this project would have been possible. And guess what… 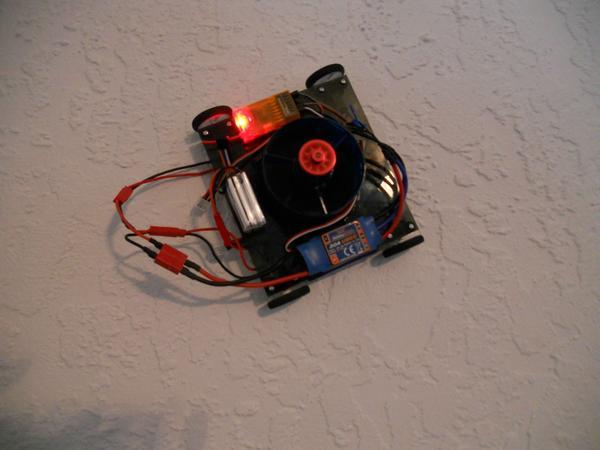 From here, a good friend of mine and I would run around campus taking video of this “suction car” climbing up various buildings and such.

So that was fun, but I wanted to keep going with the idea. I got a little cocky I suppose, and came up with a new wall climber idea so extreme, it didn’t work. It had huge heavy tires, a much larger fan and batteries, and the idea was that it would be able to go around the outside of a 90 degree corner. Unfortunately, I didn’t take any pictures of this project. I was too discouraged by how it didn’t even begin to work. But, here’s what it looked like in CAD… 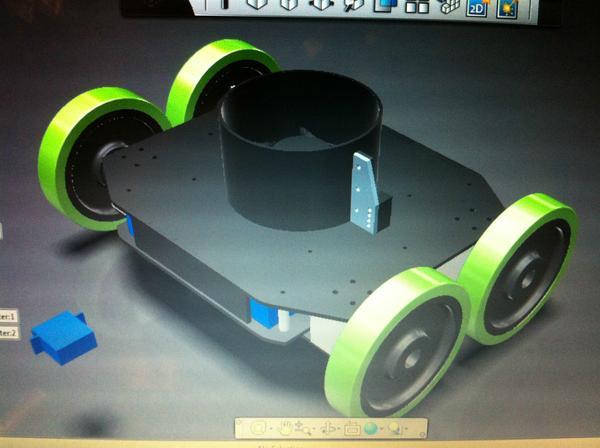 I spent a lot of time and money on this crazy idea, but it was a learning experience if anything. Now, I just had to move on to the next design.

I decided to make this next iteration much closer to the original, but slightly larger and with higher quality components. I purchased a really nice machined aluminum ducted fan and high quality motor, had the frame cut out of carbon fiber, and began the process of designing my own wheels and tank tracks that I would make myself. I spent even MORE time on this version. I wanted it to be absolutely perfect, the suction car to end them all. Well…here it is: 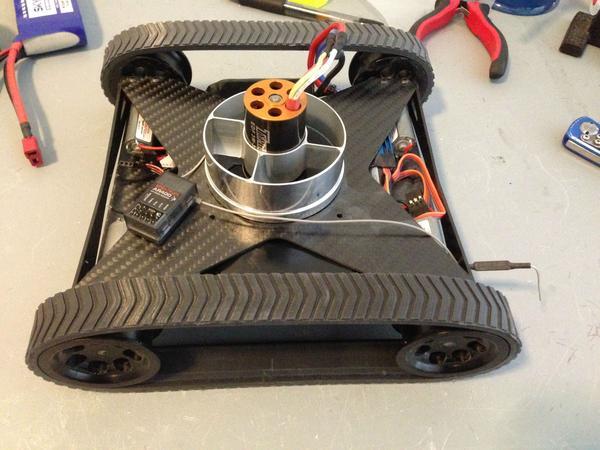 The fan and motor alone are worth as much as I spent on the entire first vehicle. 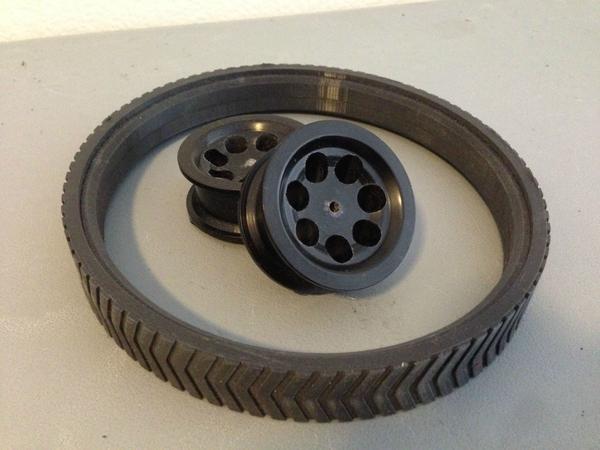 I was really proud of the wheels and tracks. I had designed and 3D printed a mold for the tracks, which I then filled with silicone to make them. I had a friend make me one wheel on his lathe, which I then made a silicone mold of, and filled with urethane plastic repeatedly to get the four drive wheels. I worked really hard on all of this, and the design worked ok, but I had never designed any sort of tank tracks before. I guess I should have made everything lighter and more flexible, because the tension in the tracks put a lot of stress on the drive motors, and they could barely move the vehicle up a wall. Also, the wheels didn’t have a deep enough groove, and the tracks would slide off easily. Sadly, I had to ditch the tracks idea, and go with some small lightweight tires again. I picked up some Pololu 42mm wheels and carried on.


Well…it works! Pretty well actually. I could make smoother transitions between the ground and a wall, the drive motors were a little more powerful, the fan was much more sturdy and didn’t get as hot, and it was all made out of sexy carbon fiber.

Up until this point, I was just having fun, designing these vehicles because I wanted to. But now I wanted to start a business and sell my creation as a product, since there seemed to be quite a few people interested in what I was doing. If I was going to sell this, before I even started a company I would need a design that I was much more confident in. The carbon fiber version was really cool, but it was very expensive to make, and no one would want to pay what I would need to charge to sell that. Also, up until now I was getting run times of about 3 minutes…no one wants to buy anything that only lasts 3 minutes before they have to charge it for an hour.

So, I started designing yet another version. This time I was going to stay even closer to the original design, because that seemed to work the best for me. I used the same fan, same Pololu drive motors, wheels and motor mounts, and only made it slightly larger in size. One of the big problems with my designs up until now, besides battery life, was neatness. There was all kinds of wiring to do and not only did it take a lot of time, it never looked as neat as I desired. I came up with the idea of using a PCB as the frame, and having most of the wiring integrated. This not only cut down on assembly time for me, but made everything look better and reduced weight, which is very important in this application. 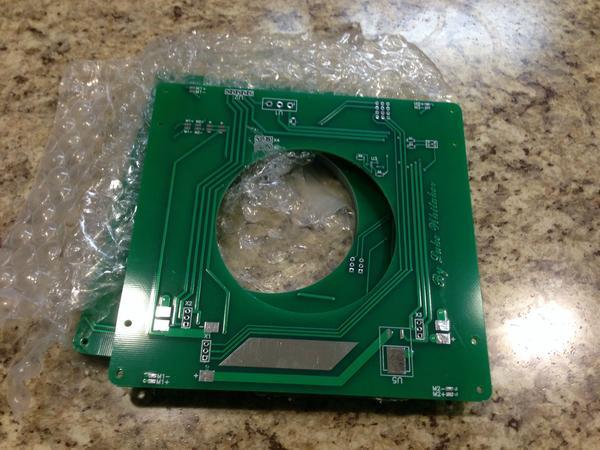 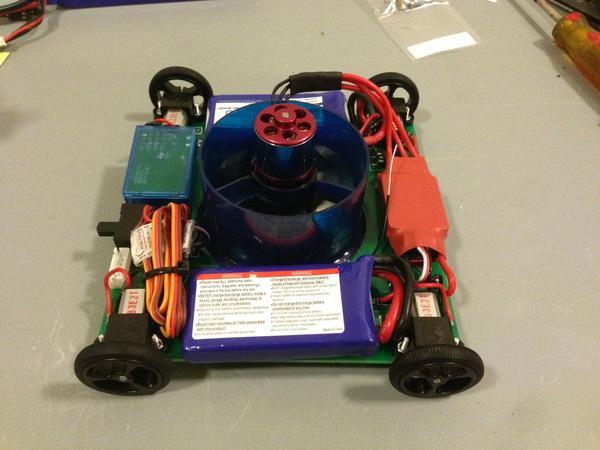 It was pretty expensive to get started with this design but, long story short, it worked! Just as good as I had hoped, too. The wiring was much easier to configure, and looked neater than ever. The entire vehicle weighed about 13 ounces, which is almost exactly the same as the very first design, only this new version had a larger footprint, ran off of bigger batteries, and had a much longer run time of 7 minutes! I also made it very easy to use by integrating the batteries into the frame, with one plug onboard for charging (rather than having to remove batteries and charge them individually, then reinstall them).

So here we are, 3 years after my first prototype. I’ve learned a lot about what works and doesn’t work (mostly the latter) and I finally think I have something worth selling. I have named my “suction car” Ibex, and I started a company called Operative RC to sell it. You can visit http://www.operativerc.com for more information. I have a bunch of other product ideas in the works that will hopefully be ready to sell soon, but for now, the Ibex is available for purchase in a fully assembled “ready to run” configuration. I won’t take up a bunch of space here advertising all the features…that’s what my website is for. But here’s a short video showing some of the fun times I’ve had with the Ibex:

That concludes the story of one of my longest running projects. If anyone has any questions feel free to ask. There are a bunch of little details I left out so that this wouldn’t become an epic novel. Thanks for reading!

Thank you for sharing your project; it is really impressive! We were all surprised at how well it worked on all the different surfaces you show in your videos, especially the rough or uneven ones. It was also fun to see how well it can transition between surfaces. We certainly look forward to seeing what other products you release in the future.

Its really great to see such type of robot with a new concept of using the brushless dc motors for suction. It must had taken a good amount of study of these R/C parts.
If I am correct for suction you are using an EDF unit that is used on R/C planes. what is the practical thrust that this fan is generating or you are using for it to remain on wall? and what are the gear ratios of the pololu motors used because you are using 4 of them which means it requires power and speed of robot is also quite good

o this is great work done.
can you tell what gear ratio pololu motors are being used in this robot (1:50 ,1:70 or any other)?
and what is your fan throttle when robot is on wall?

hello , i m also making a wall climber using the same technique , my robot fan ratings are 33v , 3A and its does not create enough suction to hold the robot against the wall ,so kindly tell me whats the ratings of your ducted fan so i can use that in my final project .

I want to ask what’s the rating of the used brushless dc motor.

this is absolutely legendary, cant believe i havent heard of it before.

looks like the new website is ‘rovertec.com’, the original link seems to be broken. . … and there’s a video of one of their robots driving on a ceiling!!!