Hi, I’m trying to use the pololu library on an Arduino Uno, however all I receive is “Failed to detect and initialize sensor”. I’ve definitely wired up the inputs correctly, with VIN going to 5v, GND to GND, and SDA and SCL to the same ports on the arduino. I did partially connect it once, however it recorded 0 for all distances, and then crashed. I was unable to get it working again after that. I’m using the continuous example provided, with nothing modified.

Can you post pictures that show your board and connections including any soldered connections you made? Can you also post a screen capture that shows the output of the serial monitor in the Arduino IDE or explain what behavior you are describing as a “crash”?

Hi thanks for your response,
Unfortunately I’m not able to get a screen capture of when it was working then crashed as it has only happened once. However what happened was that the serial monitor stopped giving any more output, restarting the serial monitor resulted in the program restarting but then no longer working. 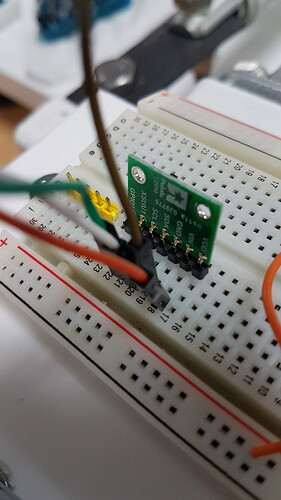 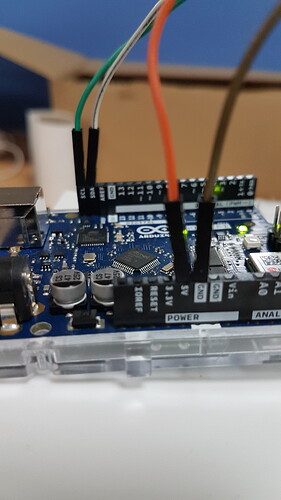 Apologies for the not great photo of the connections to the sensor itself, I’ve described what’s plugged into what above.

It’s also worth noting I’ve tried many other different configurations, including different jumper wires, a different arduino board, using 3.3v instead of 5v, pretty much everything I could think of.

The only thing I can think of is that I have yet to solder any wires to the sensor, as I was going to do that after confirming everything was working. I’m a bit of an electronics dunce but didn’t think that was required but maybe that’s where I’m going wrong?

Yes, unsoldered pins are likely to make only intermittent electrical contact with the pads. Please solder the pins and, if the sensor still does not connect, please post pictures of the soldered joints.