If each train switch takes 1 button and 1 servo output to operate, you should be able to control 6 of them with a 12 channel Maestro; however, I recommend getting 1 working first.

Have you already successfully connected and controlled a servo using the channel slider in the “Status” tab of the Maestro Control Center?

To get the button set up, you will first need to select the Maestro channel you want to use and configure it as an “Input” in the “Channel Settings” tab of the Maestro Control Center. After that, you can connect your button with a pull-up resistor as shown in the “Button or switch” heading of the “Attaching Servos and Peripherals” sub-section in the Maestro user’s guide. We typically recommend a 10 kΩ pull-up resistor, but anything in the 1-100 kΩ range should be fine. 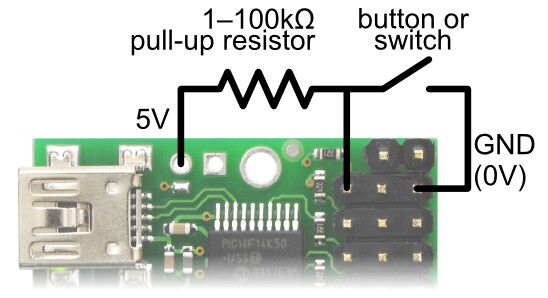 If that is connected correctly, you should be able to see the channel slider respond in the “Status” tab of the Maestro Control Center (e.g. move to the left when you press the button and stay to the right otherwise).

Once both the servo and button are set up and working, we can write a simple script that moves the servo when the button is pressed.

thanks in advance for the feedback. I tried the servo and I can move the servo. afterwards I connected the switch and this is also working I can see the slider moving from one side to the other side. I connected the servo on channel 0 and the switch on channel 1. I was thinking if I have one couple working I can copy the script for the other switch/servo couples. In the script I have problems to see where the coupling takes place between the channels so when does servo 0 react on switch (channel 1). I am from the Netherlands so forgive me the language mistakes. If you have a script for me it would be nice. The servo should go to position 1335 (appr) when using the switch and stay there until I use the switch again then it should go back to position 992. The position numbers are more or less if I have the script I can change these positions for the finetuning.

You already did the next step I was going to suggest, which is figuring out the position values you want to switch the servo between. That’s great!

Since you are planning on adding more buttons and servos later, you can start by copying the “Using multiple buttons or switches to control servos” example from the “Example Scripts” section of the Maestro user’s guide. Since it uses different channel numbers (and multiple buttons) you can make the following modifications to make it work for your setup:

If you got that far without errors, you should be able to run the script and press the button to make the servo go to the first position for 1 second, then move to the other position. This isn’t quite what you wanted, so next, we can make the script check what position the servo is in and moves it to the other, instead.

allright I am going to try this and will come back later many thanks sofar!

I took a screen picture with the routine (it is not the best quality, sorry) 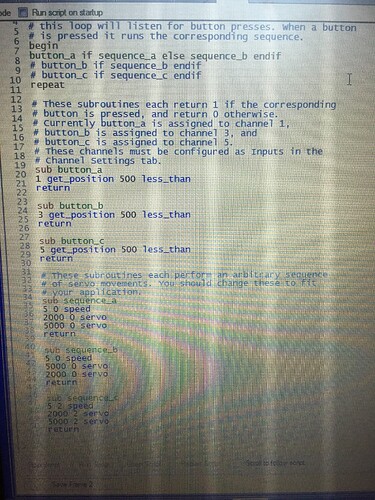 It looks like you are close to having it switch between two positions with a button press. The main obstacle is making the button press do different things each time it is pressed. There are multiple ways you could do this, such as using a state variable, but since you are only swapping between two positions you could have your script look at the current position and change it based on that. For example, you can change sequence_a to:

Then, your main code for calling the sequence can just be:

Since there is no button debouncing, I added a small delay (300ms) at the end of the subroutine to help prevent it from happening multiple times from a single button press, but note that it will continue to trigger the subroutine if you hold down the button, flipping the servo position every 300ms. If this is a problem for your application, let me know and we can work on fixing that next.

I will try this, something else I tried the maestro micro without the laptop but it did not work I think I did something wrong saving the program?

Many thanks for the help it runs like I wanted!
First the servo did not move at all, I checked the control and find out I could move the servo by moving the point on the bar so everything was still working.
Afterwards i tried other connections but it did not help. Somewhere I came up with the idea to change the positions so the program part about the checking of the positions looks now like this:

I know this post was from 2 years ago but wanded to know if you could use the Mini Maestro 12-Channel useing 5V logic. I see it can be done with a mechanical swith but could the samething be done with a 5V logic switch?

If you are unsure about how to connect your switch, you can post more information about the switch you are referring to and I would be happy to take a look.

Sorry my question was not clear. I have a I/O card that is controlled by my PC the card has pins that can switch from 5volts or 0volts. is there a way to wire that to an input channel of the Mini Maestro to control the servo from position a to position b and then back again.

thanks for the help
Mike

It is fine to connect 0-5V logic signals directly to Maestro channels configured through the Maestro Control Center software as inputs; you will just need to make sure you have a common ground between the two devices.

As far as using those signals to control servos, it should be very similar to using a button, except you shouldn’t need to worry about debouncing since it isn’t coming from a mechanical switch. So, you should be able to still use the “Example Scripts” section of the Maestro user’s guide as a reference. If you have trouble getting it to work how you want, you can post your script with a description of the problem, and I would be happy to take a look.