I would like to use the Arduino Uno to control the LED Strip (SK6812, high density strip).

I would like to have a single led on at a time, starting with the first led for about 3 seconds, and then the next led in sequence turn on while all others are off.

Does anyone know of a script which exists which will work for this?

I am new to this and have also been trying the sample codes available via this site but they don’t seem to be working as I believe they are intended to. Once I get a free moment I will take a video.

I am new to using Arduino and the LED strips. I am hoping someone can help me out.

I am sharing an image of the script I tried using, and have an error with. Any input will be appreciated. 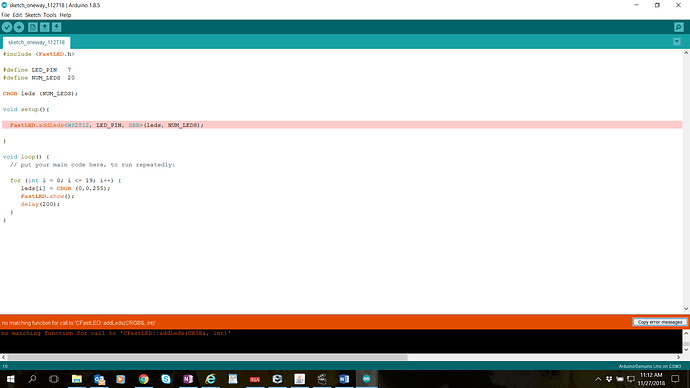 Since you are not using our addressable RGB LED strip library, our support for your issue might be limited; however, I did notice a few problematic things with the code you posted.

The addLeds function is expecting your leds argument to be an array instead of an integer. You can fix that by changing the parenthesis in the declaration of the variable to brackets (e.g. CRGB leds[NUM_LEDS]; ). Also, if you want a 3 second pause between the LEDs lighting up, you can change the delay value to 3000 since it is in milliseconds.

By the way, if you continue having problems getting the behavior your want, and you suspect the problem is related to general programming (and not a problem with the LED strip), you might consider posting a request for help on the Arduino forum as well.

Hello,
I also tried using the LED Strip Color tester as found in the library. For this video I changed to pin 7 both in the script and arduino, and also changed number of LEDS to 72 as I have a high density strip.

When I put for example 255,0,0 in the serial monitor, I think I would see a single color for all LEDs; instead I am seeing multiple different colors.

I have attached a video to show what is occuring. Could you please help me get it working properly?

Your video is really blurry. Can you try uploading another video clearly showing the issue? Also, can you post close-up pictures showing your connections between the Arduino Uno, RGB strip, and power supply?