I cant make my Pololu USB 16 to work on Linux Ubuntu. I am quite sure that my problem is my port settings.
I have seen the example code using the termios structure, but I’m used to use open ports using fopen and I would like to do so in this project too (fopen opens streams).
I started testing my code on my macbook running osX. The program runs without problems, and it shows that the Pololu USB 16 Servo Controller is a great servo controller! Now i want it to work on my small linux computer too!

Once I run the program on the linux machine, the red LED is lit and the yellow led flashes, indicating too slow baudrate. Although, its not the baudrate. I have tried baudrates from 9600 up to 57600, and it works just fine with 9600 baud on my macbook.

I think the trick is to get all the flags correct using stty -F /dev/ttyUSB0.
Can anyone please post ALL the stty flags from a correct set up port, i.e. from a functional USB 16 Servo Controller.

This command gives ALL the stty flags:
stty -F /dev/ttyUSB0 -a

These are my current settings: (I’m using ttyUSB1)

Thank you in advance!

EDIT: I have tried the code snippet from lukelukeluke which is using the termios struchture with the same result. Red LED lit, yellow LED flashing.

Hello, I don’t think that setserial is a program you should be using. I’ve never used it before, and according to the man page, it’s designed to configure the way linux communicates with your serial port hardware - it does not set the parameters of the actual serial communication, like baud rate and stop bits, and it does not send data to the serial port. In particular, baud_base is not the same thing as baud rate. Also, I’m not sure where you got the idea that you should be using 4700 baud …

The problem is my computer, not my code.
I tried the code on an other linux computer and it worked great…
These stty flags worked grat with my Pololu USB 16 Servo Controller: (print screen) 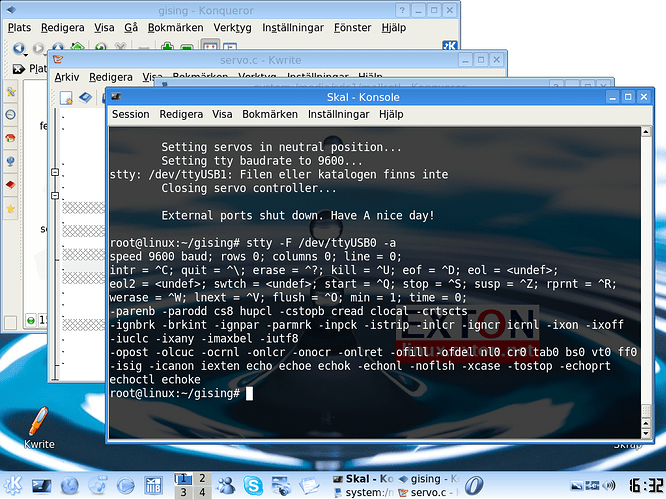 Yes, I used USB0 this time, and I did not change the address in my servo_close()

Great, I’m glad you managed to get it working after all. Do you know what the problem was with the first computer?

I’m afraid not… I have set ALL the flags exactly the same, but it’s still not running. I don’t really know what to do at this point, but I’ll post here when (if) I get it to work!

I just read over this forum because I’m having trouble finding a code that will allow me to talk to the same servo controller on a mac. I am more of a beginner when it comes to writing code, so I’m sure the error is in the code I’m writing. I was hoping that I could get some help with exactly what the code should look like that you used on your Mac. I generally work with C++ but any language will pretty much help. Thanks.

Matt seems to be discussing this same question over at this topic. Let’s continue the discussion about C++ servo controllers programs on the Mac over there.