I am using a LSM303DLHC accelerometer to measure vibration. I had thought I understood something … but now am not sure.

Assume the device is sitting still. The only physical impact on the device being the rotation of the earth (that is, ignoring my central AC, overhead fan, the cat …). Assuming the ‘steady state’ output values are all 0.0000 (I know it would not be, but for purpose of understanding …). If an object is dropped onto the surface where the device is, the outputs all begin to oscillate, going above and below 0.0 for a period of time until the vibration stops. 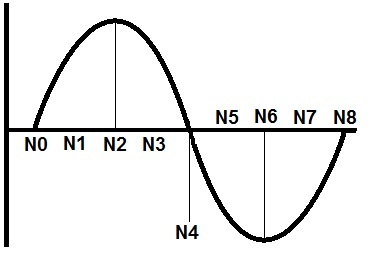 Would it be correct to say that at time …

Would appreciate any feedback !

The comments associated with N4 and N8 are not correct. An object accelerating according to the graph, e.g. along the horizontal X axis and starting from rest, will not reach its maximum distance from the start point at time N4. In fact it is moving at maximum speed at that time. It will be farthest from the start position at time N8.

So, on the graph of acceleration versus time, at N4 the device begins to slow down ?