Hello. I recently obtained a 3pi robot and right away I can tell that something isn’t right but I didn’t know what the quickest way to troubleshoot it would be. For example, when I press the on button, the screen displays the proper message to try the demo program but if I press the letter B or any of the other letters, the screen and the robot itself turn off. Also, when I attach the robot to my laptop via the included ribbon cable, the green light is on but instead of a yellow light, I see a flashing red light. I would appreciate it if someone could either explain to me what’s going wrong or if they could point me to a resource which explains it, thanks. 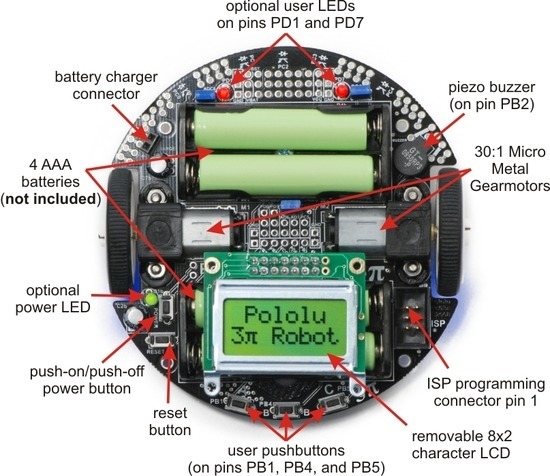 If that does not fix the problem, can you be more specific about what happens when you run the preloaded demo program? For example, what words do you see on the LCD when you press the B button? Is it making it to the main menu as described in the “Using the Preloaded Demo Program” section of the 3pi user’s guide? If so, which demo are you selecting when it turns off?

It sounds like you are referring to the 3pi Robot + USB Programmer combination product. If that is the case, you are using our older USB AVR Programmer. The LED behavior you are describing is indicating that the 3pi is not powered. However, I would prefer to continue troubleshooting with the preloaded demo program for now, before you try uploading a new program. Also note that you should never attempt to program your 3pi with drained or uncharged batteries; losing power during programing could damage the 3pi.

Thanks for the quick response. What I did was shoot a video of what happens and uploaded it to YouTube so that you can view it and see exactly what I mean. I also took a picture of the two types of batteries that I’m using in it; two of each kind. I purchased the alkaline ones recently so they should be charged but the voltage is different on them compared to the other ones which came with the Pololu robot, and those I removed from their original packaging so they should be charged as well. I will purchase a DMM but in the meantime I figured I’d send you this info so that you’d be able to see.

Update: So, it turns out that it was a battery issue. I replaced all four batteries with brand new batteries and the demo programs work. I’m no longer having the issue of the screen/device turning off after I try to test the demo programs. Thanks for the helpful suggestion to check the batteries since that saved me a lot of time and possible expense.