We’re pleased to announce the release of the TReX Jr Dual Motor Controller! The TReX Jr offers the same set of features as our original TReX, but comes in a lower-power, lower-cost package. 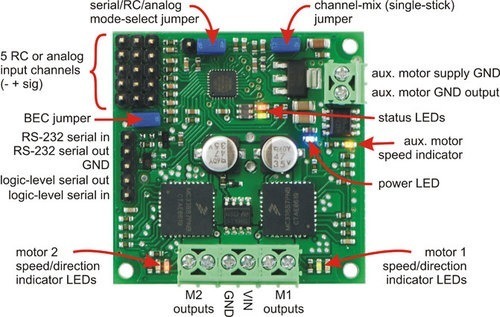 SWEET! Man, you guys are rolling new stuff faster than I can keep up!

I’m passing this on to some folks out here who are building underwater ROVs. The mixing features on this and the TReX controller have loads of appeal for that application. So far I only know of one ROV built for the BIRR competition that had proportional control over motor speed.

Two of these along with an IP66 rated enclosure and connectors makes for a really nice control system. And the choices in interfacing means they can start with an RC-over-coax system and move up to on-board microcontrollers.