I’m working on a balancing robot, but struggling with getting smooth stable readings from the MinIMU-9 v2. I’ve tried using the MinIMU-9 + Arduino AHRS library which gives me ±1 degree pitch data with the board flat and motionless on the table. The Pololu_Open_IMU library improved my pitch data to about ±.5 degrees, but I think it’s still not stable enough to get the robot to balance. Both of these libraries already have filtering and smoothing in them. I have done the calibration and used those values in my testing. I don’t think I have a bad board because the data output I’ve seen from other posts look to have the same fluctuations.

Any advice or recommendations for getting smoother stable readings?

Is there a particular reason why you think ±0.5° is not good enough for a balancing robot? In general, the sensors on that board should be more than sufficient for what you are trying to do.

With the fluctuations, even if the bot is balanced the readings say it’s not so I’m finding it hard to keep it steady. 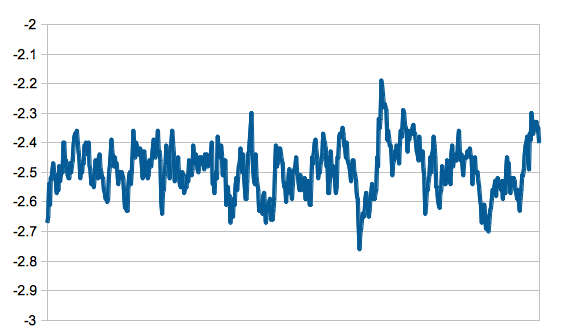 I’m using this project as a guide http://blog.tkjelectronics.dk/2012/03/the-balancing-robot and he’s using an MPU-6050 and said he’s getting ±.05 degree readings when flat on the table.

You might just need to do a better job filtering the results. Also, fluctuations like that aren’t necessarily a problem; how have you determined that those are the cause of your instability?

It looks like the robot in his video uses the LPR530AL and LY530ALH gyros, which are older and not as good as the gyro on the MinIMU.