I’ve used the wixel in a remote control application, and made it conveniently plug into a PCB I’ve laid out using some very low profile header sockets. As it turned out, my best layout called for the antenna side of the wixel to end up very close to the metal case of a small rotary encoder, my only other choice being to reverse everything and make the USB inaccessible for in-circuit diagnostic monitoring. I suppose I was fairly lucky, as the communication to my test receiver circuit remains fairly stable up to about 20 feet away, but its nothing like the near 50 foot rang I had when the wixel was plugged into a white board.

I’m satisfied with its performance, and it will do for my intended application. But lets say I wanted to try experimenting with adding a short length of wire to the existing antenna. Who knows… maybe a short 1 inch section added to the right place and pointed away from other metal circuit features might make a marginal change for the better. So my question is whether anyone has tried anything like this before and if so, what the best point in the circuit (or wixel board trace) to have the best chance at success with such an experimental addition.

What is the max gain of a Wixel? Just curious. I don’t see it published but perhaps that’s for the best. FCC and all that.

I’m getting a good 50 ft but I mount mine perpendicular to it’s breakout board and don’t have any metal parts or anything near it.

I use these for the first 3 pins on the right and left, they give me the mechanical stability, then use wire to connect the remaining points. This also offsets the board enough to plug in the usb.

I was trying using two wixels to monitor a tank level. The one wixel was connected to
a sensor about 20ft away in the top of the tank. The other was inside the house about
20ft away connected and was coded to display the tank level. I was unable to get the
two to connect. Perhaps the walls or plastic PVC tube the remote sensor was in was
preventing it from communicating.

I was hoping the wixel would come with a ufl type connector so that a higher gain antenna
could be mounted. I read the app note AN043 as well AN003 which talks about suitable antennas
and decided to try a different antenna.

I started off by severing the trace that ran to the inverted F PCB antenna. I used a razor blade
to scratch off the trace so that the lead from the small impedance matching network connected
to the CC2511 had enough bare copper to solder to.

I’ve experimented with basic monopole (whip) style antenna used on WiFly and XBee type
modules. I started by using a 25mm lenght of teflon insulated wire to make a 1/4 wave
monopole. This worked very well but the teflon wire was too thick so I instead tried a simple
copper wire. This time I opted for a 3/8 wave 44mm (no teflon jacket).

The results were promising. I only changed the antenna on the remote sensor unit which transmits
periodic readings. The other unit simply listens for updates. With this antenna, range was increased
by 30 - 50%. I will try different wavelengths to see which matches best with the supplied components.

It would be great if they sold these with a u.fl connector !!! 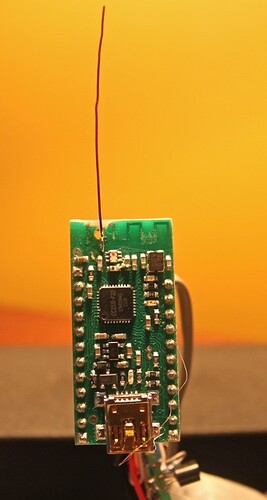 This is very useful information! Thanks for posting.

The components of the antenna matching circuitry are probably not optimal for the straight wire antenna, so you might check the TI forums to see if anyone can offer advice (or has already worked out an optimal setup). Or perhaps we could even gently entice the Pololu engineers into experimenting.

From what I gather from the TI documents and the Wixel docs, a 1/4 wave monopole with ground
plane should work well. I think the reason the folks at Pololu used the inverted F is that it is because
it is more robust ( less likely to break off ) and was part of the reference design from TI.

I plan to add a ground plane using a small copper foil and trimming the antenna to 1/4 wave and
see if it does better.

The Wifly and Xbee designs which use similar chips all use 1/4 wave monopole (Whip) and have
much better range.

I would be surprised if the impedance matching components are the same for the “F” configuration and the 1/4 wave whip, but it seems possible. Does anyone know?

Timely topic for me, so thanks!

I just received a bunch of wixels (unable to pass up the great black friday deal) and I’d say my biggest disappointment is with the range. I get very spotty reception at 20 feet across clear air. I haven’t had much time with them, but I’ve tried different orientations and channels, but still not much luck.

I’d really like to get a better range, so I’d appreciate any info people uncover.

I’m also looking at implementing a simple protocol to create a wireless mesh (probably some variation of tree based protocol). Anybody aware of anything happening along these lines?

Not to tout other manufacturers on the Pololu Board but you may want to look to other solutions rather than hacking about like this if you need range. Not to bash the Wixel, I had a blast writing code for mine and the range for me (outside) was a reasonable 50-60ft. For stationary things, it was fine but when I added moving vehicles, not so much. I won’t go on about it here, I have more details on my blog if you are interested.

That said, I do have a set of apps for the Wixel that allow it to operate in a master/multiple slave manner. It’s not mesh, but if you want to control many wixels from a single master, it will do the trick:

If you have not done so already, you might try the recommendations listed in the Ensuring a Good Radio Signal section of the user’s guide. You might also try using them in a different area all together, such as home, work, or school, to see if you get a better signal.

Also, thank you for sharing your Wixel apps and your experiences with the Wixel, Martan. Your blog looks really informative too!

Just trying to find engineering solutions for stuff. I want to emphasize that the Wixel, in my initial application, performed really well. I put the master about a foot off the ground in the middle of my layout area and I had a good 50ft radius of solid control- as long as the destination node wasn’t moving. I should also say that each Wixel would, with a healthy power supply- drive several standard servos over twisted wire to the tune of 100ft or so. So it’s a pretty beefy little widget. It just depends on your application.

I just want to report that I’ve had some limited success modifying the wixel antenna as follows. The zig-zag portion of the PC trace antenna (the side that has no connection at the board edge) was severed with a quick grind of a dremmel tool. The other half of the PC trace, that part that makes one loop and terminates at a circuit ground was left intact. The middle trace that formerly branched off in two directions was scraped to make soldering possible, and a 1/2 wavelength piece of insulated #24 wire was soldered at that point. I also coiled this short piece of wire (62.5MM) around a pencil, which resulted in about 3 turns, and then stretched it out, over a distance of about 30MM. This is similar to what tbabun did, except that I left the ground loop part of the trace intact, and used 1/2 wavelength instead of full (A full wavelength of 2.4Ghz is 125mm, so i/2 that is 62.5mm.), and I also had experimented with consolidating the wire (coiling), as described.

My tests were conducted making the above modification to a transmit only application, in which a short packet (20 bytes plus overhead) was sent 10x per second. The receive side (receive only) application simply gathered these packets, and maintained statistics based on the average LQ (radioLqi() checked after each good or bad packet receipt), the total number of packets received over the course of 2 seconds, and the total number of errant (bad checksum) errors. A baseline test was performed with the unmodified wixels separated by an ordinary house wall (plate over wood frame), about 2 meters total. This was a threshold in at which some occasional errors were expected, so I’d more easily see the positive or negative effect of each modification tested. A second test would then be done with the transmitting wixel placed 30 feet away, with two walls in-between. This was a threshold where I would begin to see as high as a 50% error rate with the unmodified wixels. My statistics were monitored by using the USB on the receive side as a virtual serial port, using a terminal program. Every two seconds, a report would be prepared and displayed.

To gauge overall quality of communication, I have to say that I have always found the LQ numbers to be all over the map. Other than statistically higher average numbers when the distance and wixel orientation is more ideal, it does not reliably correlate with the more important statistics of (a) how many packets are received within a given time frame when compared to the expected number, and (b) how many of the packets received were “good” (meaning, they did not result in an internal checksum error ( radioCrcPassed() returned 0).

So all that said, after trying several combinations of wavelength, with or without the ground loop severed, and with or without the added antenna wire coiled, and moving the transmitter antenna to a few different orientations, I found that with my 1/2 wave addition as described, there was a marked increase in the overall number of error free packets received when compared to the unmodified transmitting wixel, though I could NOT correlate this to a significantly higher an overall higher LQ statistic. This antenna combination also dropped my 50% error rate in the second test (30 feet apart, two walls between) almost half… so I’ll say about a 25% error rate. Further, the coiling of the antenna extension seemed to cause the improved receiver statistics to be less affected by changes in the transmitting antenna orientation.

Interestingly, some other variations were not as promising…

With the ground loop severed, neither a full wave nor a 1/2 wave antenna addition, coiled or not, seemed to be an improvement over the unmodified wixel. I assume this is because the loss of the PC trace ground loop put the overall antenna impedance way out of range.

I’m not an RF engineer, and so I have no clue why this would be (perhaps impedance again), but even with the ground loop trace intact, the half wave antenna noticeably outperformed the full wave addition.

Coiling the wire was an afterthought, to see if any added antenna was still worthwhile if it had to be crammed into a smaller space. As I mentioned, coiling the antenna did not seem to hamper the improvement at all, but it did seem to make the antenna orientation less significant.

Antenna design, construction and impedance matching is one of the blacker arts of analog electronics.