I doubt those are resistors on the motor leads. Capacitors are more likely, for noise reduction. Post a picture!

It is nearly impossible to troubleshoot a circuit if you don’t know the relevant parameters and for a motor, free run and stall currents are among the most important. Another way to estimate the stall current is to measure the winding resistance, while rotating the motor shaft very slowly to overcome brush contact resistance.

A brushed motor briefly draws the stall current upon startup. It could be that the DRV8801 is limiting the startup current, or current limiting in general. If that is the case, you could try a higher current driver like the VNH5019.

Ok, here is a picture. 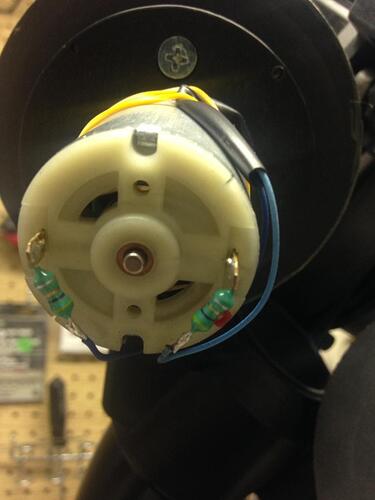 768×1024 48.7 KB
This motor doesn’t have the resistor connecting the motor leads, but does have a resistor between the leads and the motors. The color codes are green, blue, gold, silver. If I look that up, it should be 4.6 ohms, but if I measure the resistance on my multimeter I get .5 ohms.

So could you elaborate on how to calculate the stall current by measuring the resistance? If I connect my multimeter to the motor leads (inside the resistors - I’m connecting right to the leads), I measure 7.5 ohms. If I turn the motor, the resistance goes up, and the faster I turn it the higher the number is, so it’s hard to know how fast to turn and which number to use. If it’s important, I could try your idea of applying a low voltage and stalling a motor, but that does make me nervous!

Those are inductors and they serve the same purpose as capacitors – noise reduction.

Taking the 7.5 ohm value for the winding resistance, the stall current at 24 V would be 3.2 amps. That is a bit too much for the DRV8801, and it could indeed be limiting.

Oh! Thanks for clearing that up.

And, I know the drv8801 can’t handle that current level, but the current draw never gets near that in this machine, not the entire machine, and not even close for a single motor. These motors get very little resistance in this machine. There are three of these motors, plus two stepper motors, plus another smaller motor. They all run at once, and the power supply is only a 2.5 amp power supply.

But back to my original question, if you could shed some light on why the drv8801 can’t get the motors moving at the same duty cycle and PWM frequency as the old controller, I’d appreciate it! And to be clear, the drv8801 CAN move the motors at that duty cycle at a lower PWM frequency (such as 490 Hz). It’s only at the higher frequencies that it works poorly.

Sure! I think you’re onto something.

Ok, here are two oscilloscope captures from the original controller, motor running, with a 27us duty cycle and a 3.9kHz (255us period) PWM frequency. (apologies for the upside-down images. They’re hosted on photobucket and look fine there, but when linked to here they’re showing up upside-down.)

The first shows the waveform and the second is zoomed in on a single wave: 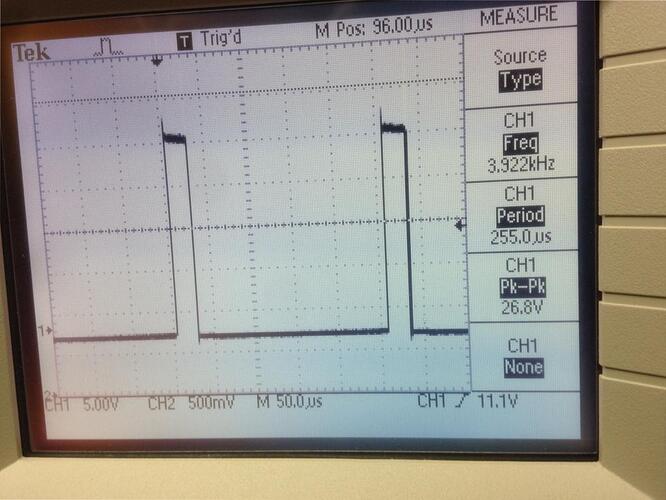 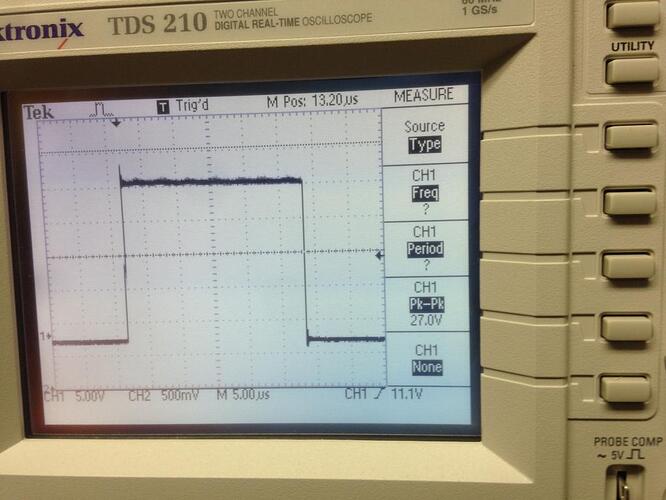 And here is the same thing with the DRV8801: 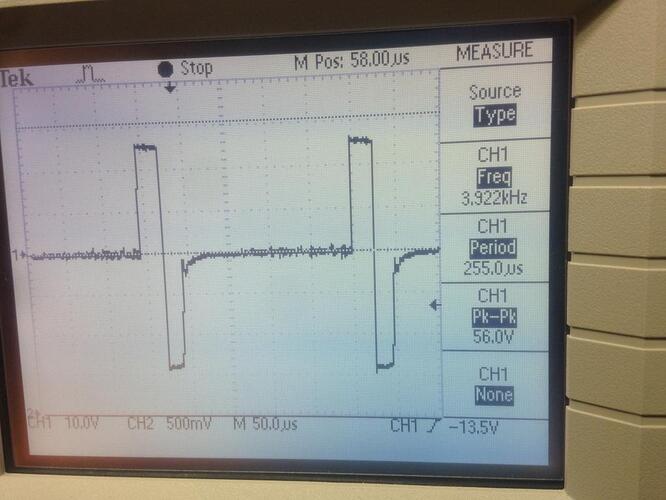 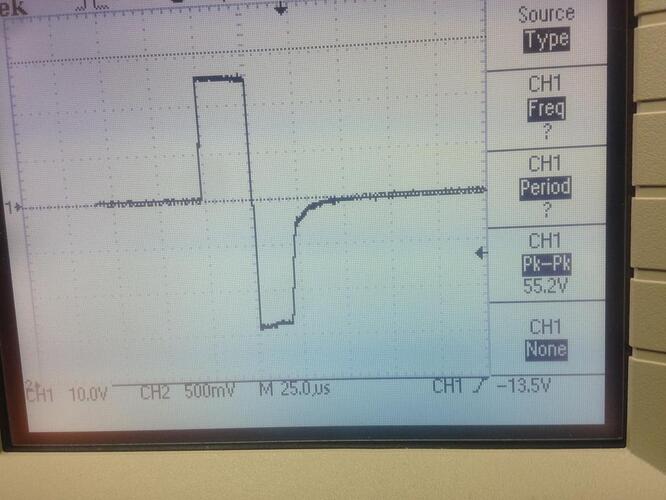 So as you see - the waveform for the old controller looks basically the same whether the motor is running or not. But the wave with the motor running on my DRV8801 controller is very different! Can you explain what’s going on here?

We tried duplicating your setup here but could not reproduce the problem. Could you tell me and post pictures of how you were measuring the motor outputs with the oscilloscope? Could you also post pictures of your overall setup, including how the driver is connected? If possible, could you try bypassing the inductors on the motor to connect it directly to the driver and see if that helps? One easy way to bypass the inductor is to clip test leads across them.

Ok, thanks for your help!

Here is an image of the oscilloscope screen when I bypassed the inductors. 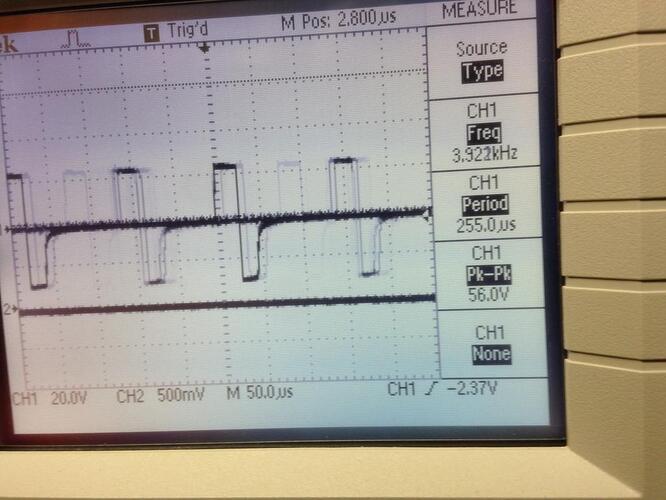 Basically the same signal, but it is noisier.

As far as my overall setup, it’s a custom PCB I built. There’s a bunch of stuff in there that’s irrelevant to what we’re talking about here, and it’s kind of proprietary, so I don’t want to post it on a public forum. But I can PM you the circuit diagram if you want.

As far as the DRV8801 connections go, I’m sending a PWM signal from an Arduino. The Arduino normally outputs a 490 Hz PWM signal, so I have some code to modify the system clock to send the 3.9kHz signal. I expect you know all about how to do that, but I can send you a link explaining it if you want, and it doesn’t seem relevant to what’s going on here. But maybe it is - what do I know.

My connections to the DRV8801 are as follows:

I’ve probably left some things out and you probably have more questions, so would it make sense if we talked on the phone instead?

And just to be clear - even though I know how to hook up an oscilloscope, I’m an electronics newbie. I don’t understand what we’re seeing with that wave. What does the part going down tell us? Why would we see that when the motors are connected, but if you disconnect the motors you get the normal square wave you’d expect. Does it have something to do with back EMF? And is this significant with regards to my main issue - that I can’t turn the motors at a lower duty cycle at a 3.9kHz PWM frequency?

Try setting the BRAKE pin high, as recommended. That should give better control at low PWM ratios.

[quote]I will do that in the next iteration of my board.[/quote]Do you want to solve this problem, or just argue about it?
Or, is it too difficult for you to cut a PCB trace?

I can’t cut the traces, the DRV8801s are mounted to female headers on the board, which obscure the traces to the pins. But I did manage to finagle setting BRAKE high, and that did seem to make a difference! So would you mind explaining what’s going on? Not being argumentative, just want to understand this. I don’t get why braking lets it run faster, nor do I understand the wave I was seeing.

I think about the effect of braking this way, but I may be wrong.

During the PWM off period, braking slows down the rotor quickly (much more quickly than coasting), so during the next PWM on period, you have less back EMF to counter and consequently, can drive more current into the windings, generating greater torque.

Yes, that’s exactly how I had it connected. So that be bad, huh? Doh! I guess I can see that now. I told you I was a newbie at this. Ok, I will connect the ground lead to gnd going forward. The scope seems fine so far, I hope I didn’t damage it.

Any comment on the wave I was seeing? And can you explain how braking works, electrically? Jim’s explanation as to how braking allows the motor to go faster at lower PWM frequencies sort of makes sense to me (thanks, Jim!), but if the motor is slowed down during PWM off, it will have more inertia to overcome during PWM on…

Since you were measuring across the motor outputs with your oscilloscope, I am not sure how valid those screen captures are. If you post new captures, I might be able to comment on the shape of the signal.

For more infomation about the differences between drive-brake and drive-coast modes, you might find this post helpful.

No, they’re not valid, except inasmuch as they show a difference between having braking on and off. I think the “down” part of the wave was the back EMF the motor was producing while coasting after the PWM duty cycle post. With braking on, that pulse was absorbed by the motor. This was very enlightening to me - thanks! I am going to study that link you sent. I’m trying to understand how to figure out what the best PWM frequency is for my application (and if it matters). I’m using a circuit I built around a CNY70 photodiode, in conjunction with a white stripe painted on the wheel the motor turns, to measure RPMs. What I see is that the RPMs steadily increase until about 240 (out of 255) duty cycle, and then it goes down. It does this for most PWM frequencies, except for very low ones. Very strange! Especially since a 255 is “full on” and should be the same wave no matter what the PWM frequency. I am not at all sure my measurements are accurate, but that’s what I’m consistently seeing.

We generally recommend using higher PWM frequencies (above 20kHz) to eliminate audible noise from the motor.

Are you measuring a higher speed at 240 than at 255? If so, I suspect your measurement is not accurate. What are you using to read your photodiode and how are you outputting the speed reading? Could you post a sample of the readings?

Never mind, I figured it out. Agreed, as expected, the numbers were not accurate. I was measuring by using a CNY70 phototransistor circuit on a board clamped to the motor housing. I finally realized it was very slightly touching the motor wheel as it spun, which seemed to affect the RPMs at higher speeds more than lower. When I reattached the measuring device with a different clamp, I started getting a nice solid linear relationship between PWM voltages and RPMs.