Robotics and electronics discussion Share your projects
Ken October 13, 2015, 8:14am #1

I decided to make the Motion Tracking Skull Halloween prop posted by Brandon on 7 Oct 2014. I am not going to reiterate everything he said, so please read his work first. pololu.com/blog/419/motion- … oween-prop
I purchased everything he listed except for the servo ( I had several of these). So I went to work finding a skull. Well I had a full size skeleton so I cut the head off thinking that this would work fine.
I had to then educate myself on the program syntax and figure out what his program was doing.
I made several changes to his setup:

Now that I had the program working I started modifying the head. Since I was putting it on the skeleton frame it needed to be light. I cut a square hole in the base of the skull (where I chopped of the head) and installed the servo. I tried a battery pack stuffed in the head but the skeleton spine didn’t like the weight, so I opted for a 6V lantern battery that had enough mAh to get through 30 days. I hid this behind the skeleton, running the wire up the skeleton spine.

I had a piece of proto board which fit the sensors perfectly. I found a piece of thin plastic and made a template for the inside of the jaw. I took a screw two nuts a washer and a T-nut screwing the T-nut to the bottom, then a nut up towards the top then the washer then the plastic then the proto board then the nut right at the top. 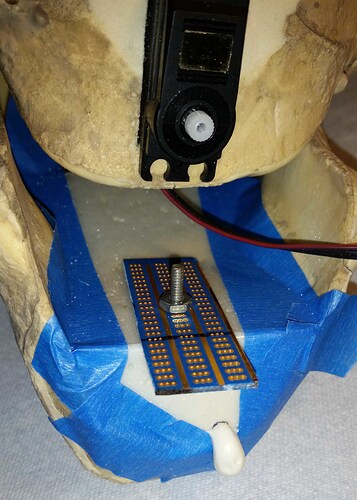 I put this in the jaw of the skeleton head, put some painters tape around the front edge so it wouldn’t make a mess and foamed it in place. Use the foam sparingly- mine kept expanding for a day and a half and slightly warped the plastic. In retrospect I would have put more holes in the plastic for the foam to ooze out of. When it finally stopped expanding it hardened. The T-nut at the bottom held the screw in place so I could remove the proto board and start connecting parts.

I had to screw a connector plate to the servo on the skull and then screw the connector plate to the spine of the skeleton. A bit tricky.
I soldered the premium jumper wire (I used male to female) to the proto board, ran the wires to the Micro Maestro, connected the sensors, connected the battery and everything worked. I found that the range was shorter than I thought and realized that the sensors were reading part of the bottom of the skull jaw. I removed the proto board, drilled a new hole that allowed the sensors to sit lower.
This hard working skeleton is at the Cedar Gables Inn Bed and Breakfast in Napa and has a lot of fun scaring our guests.

Awesome project! We are really excited to see people implementing our Halloween example projects into a grander setup. Since you were unable to upload your GIF, can you try uploading it to a free image hosting site (e.g. Photobucket) and post a link to that? If that does not work, you can try emailing the GIF to us (at support@pololu.com)?

Also, if you have any additional pictures, video, or documentation to share, we would love to see it!