I use a mechanical arm almost the same as to the one in the picture below, with the only difference being that I use a single servo for the leftmost joint guessing that for a horizontal movement with no weight on top of the arm a high torque servo should take care of it. 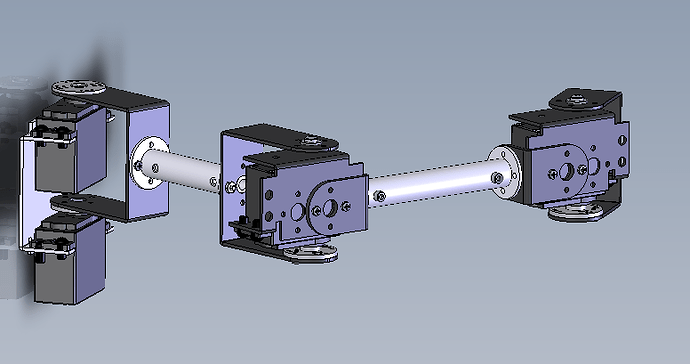 Edit: Below is the actual photo - I didn’t have this at the time when I was initially writing, so maybe this makes it more clear 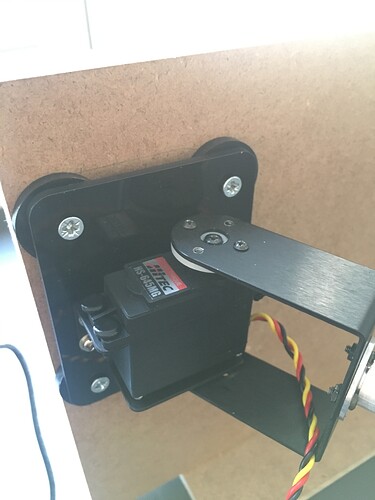 I used a Hitec HS-645MG for this joint and use a Micro Maestro as the servo controller and a 5VDC 10A switching power supply that powers everything. 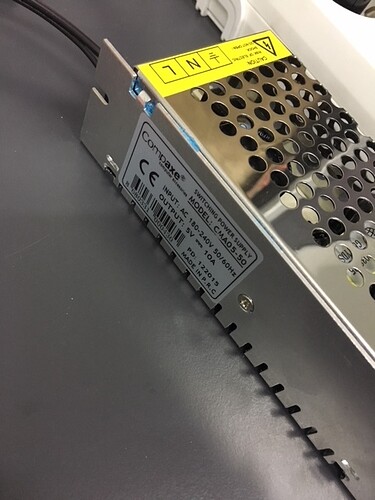 Below is a picture of my connections from the power supply cable to the Micro Maestro board - I used standard wires that fit breadboards, header pins etc. On thing I suspect is whether I need thicker wires, but could only find these as standard ones… 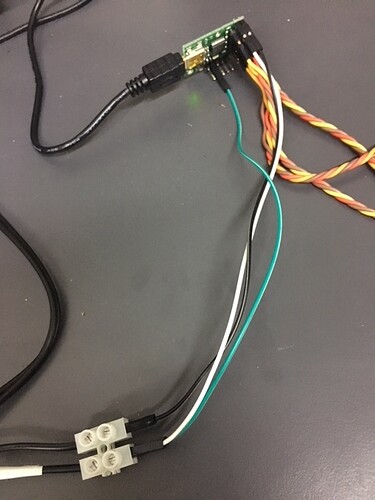 Even if I do not connect the other motors, I see a lot of shaking/jittering at some random locations. Sometimes it works smoothly at the same location, but there is always some jitter at some location when the controller tries to keep the motor fixed at some location. I also played with the period in the advanced options on the Channel Settings tab in the Maestro Control Center and saw that decreasing the period makes it shake at a slower rate.

I have two of the same arms and so I thought let’s test everything with the second arm… I used the same motors using the same power and controller circuit actually by plugging this out and plugging the other one in – and it worked without jittering/shaking! Both of my HS-645MG servos are brand new and right now I don’t have a third servo to test. But I tested with Tower Pro’s cheap MG995 servo and the shaking is still there, which leads me thinking that it has to do with the mechanism, maybe some mounting differences between the two on millimetric scale, but I cannot be that accurate anyway… I cannot rely on the arm that works at this point since I don’t know the reason for the jitter and I do not know if that one also will suddenly stop working properly at some point. So I have no idea where the problem is:

What would be some suggestions for me to try, for finding out where the problem is?

Does your servo still jitter when you take it completely out of the arm assembly and run it with no load? A video showing the jitter might be helpful.

From a brief search it looks like your HS-645MG servo might have a stall current of 2.5A and the MG995 servo might have a stall current of 1.2A. Is that correct? If that is the case, your wires might be a little small, but are likely okay for powering a single servo and probably not causing the jitter. You might want thicker wires from your power supply when all the servos are connected and under load though. Your supply seems like it should be plenty powerful enough for one servo, but if there is a power issue, adding a capacitor close to the servo might help.

Has the Maestro been powered from USB during all of your tests? 5V is the minimum operating voltage for the Maestro, so if it is only supplied power from the same 5V supply as the servos, it could cause the Maestro to reset if that voltage drops a little when a servo draws a burst of current when moving or straining.

It took me some days to reply, but in the meantime I had a chance to test another new HS-645MG and there was no jitter! Besides, I took out the old servo that had the problem out of the arm assembly and tested it without load as you suggested – there was no jitter that I could see.

Regarding the USB connection, I normally do not use the power from the USB for the controller – in the picture USB cable is seen because I was playing with the options on the Channel Settings tab in the Maestro Control Center at the time I took the photo, but I plug out the USB cable most of the time.

So since the changed servo works now, it seems to be an issue with the bad servo, but since there is no jitter when I run the servo without load, there could be other factors involved, too. When you wrote “You might want thicker wires from your power supply when all the servos are connected and under load”, do you mean the jumper wires that connect to the Maestro controller’s header pins? In this case, should I use thicker wires to the Maestro controller’s pins? (by soldering them to the headers of the controller?) Or should I also try to change the cable that goes to the connector before that (white screw connector in the picture in my first post) which is thick speaker cable (with similar thickness as lamp cords)?

The jumper wires between your white screw terminals and the Maestro are the connections I was pointing out. They might be fine depending on how much current your system draws, but are the one most likely to be an issue under heavy load because the power for all the servo must go through them.