I got a pair of S7V7F5 from the Black Friday sale.
I soldered up the angled header, and put the regulator in three rails on a breadboard.
I then hooked up 11.75V on VIn (measured by my DMM)
Unfortunately, the regulator gets very hot with no load, and shows about 8.5V out.

The test set-up: (Voltage in on the left; measured on the right)
amazon.com/clouddrive/share … 2N15lwt3NI

What’s going on here?
My solder iron is 580 F, and I don’t dwell for very long when soldering, so I doubt I ruined both regulators.

Update: I got out a third of these regulators that I’ve had since before, and ran with lower input voltage.
This version runs fine. Thus, Given that I’m running so close to the maximum voltage in, the theory is that one of the following is true:
A) I’m suffering the dread LC-spikes in this test
or
B) Somehow these two got ruined in the mail

Since it totally mustn’t be my own fault for any reason, I’m going to have to have words with the mailman…

PS: One could conceivably minimize the risk of this problem in this design by using a 0.5 Ohm resistor on the input ceramic capacitor, or by using a TVS diode, or by using SMD electrolytics instead of ceramics… Tants would probably drive up the price too much?

Oh, the irony! I got these regulators to go into a well designed PCB with input power protection (electrolytic capacitor + TVS diode.)
But, to make sure it works before soldering it into the PCB, I decided to test it on the prototype board first. Which quite likely killed it!

I replicated the hookup experiment. First, this is the power supply I’ve been using for a couple of years (it’s been doing great!): 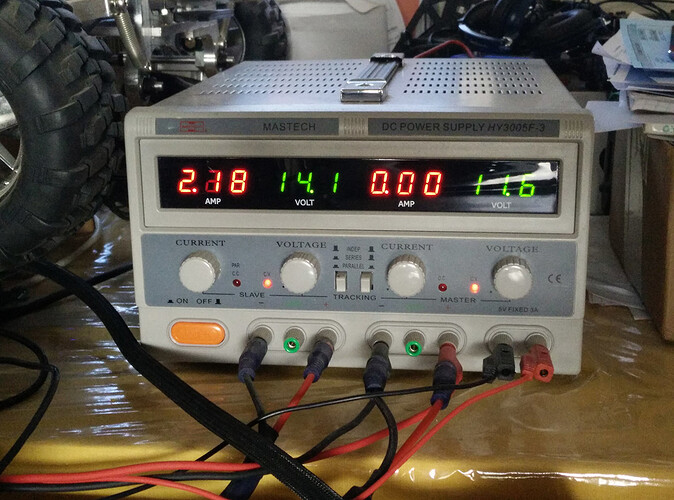 The right side is powering the experiment. The left side is powering my computer, which also happens to be mounted on the chassis with the wheels that you can see peek into the picture on the left…
The wires are two 24" banana wires in series – banana to banana, then banana to crocodile. Probably lots of inductance to be had there.
I then hooked up my scope (an OWON PDS5022T – which also works great, although only 7 to 8 bits resolution.)
Here’s the ringing I see when clipping on the positive crocodile clip: 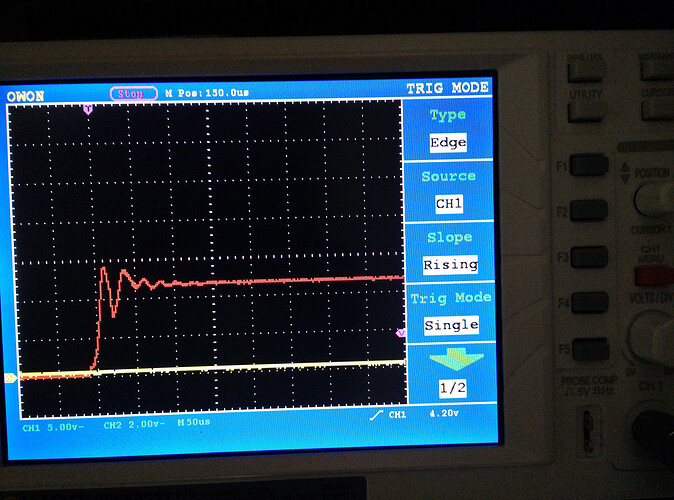 The input is 11.6V. The peak of ringing is almost 15V. (I measured over 15V in another attempt that I didn’t get a picture of.)
Eyeballing it, it looks to ring at like 35 kHz or so, for what that’s worth.
Adding a high quality 10 uF electrolytic capacitor does a little bit, but not a whole lot, to fixing this problem: 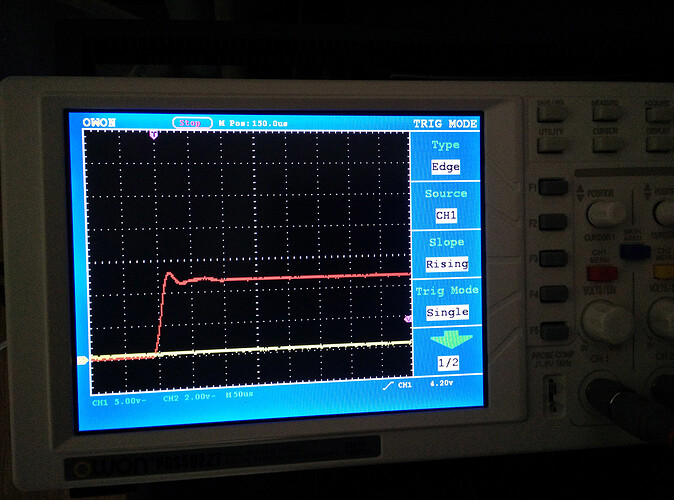 Finally, I tried with a 100 uF electrolytic capacitor, which seems to be enough to cure the problem: 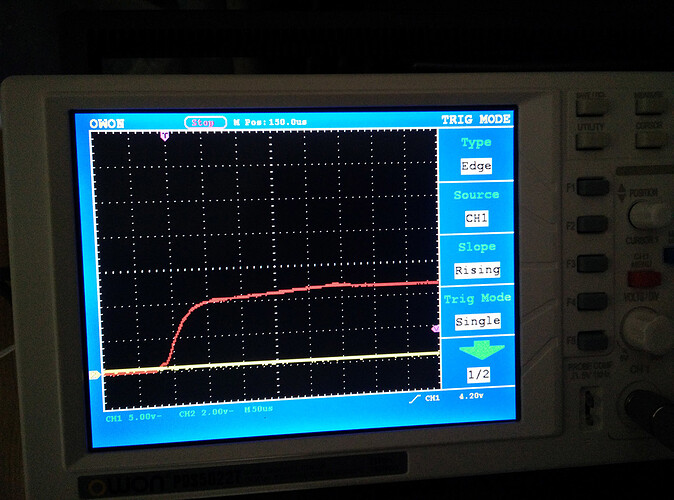 Thanks for the suggestions and nice scope captures confirming the likelihood of LC spikes being the culprit. We always face trade-offs with things like input protections, size, performance, and price. The best approach is typically the large electrolytic cap, which I think people can add easily enough themselves if necessary and which would unnecessarily make the boards much bigger for those who do not need them. TVS-type solutions would unnecessarily limit the operating range since their tolerances are typically not that good, so a part that could have gone to 11.8V would then only be usable to maybe 10V (to make sure you don’t start losing a bunch of current through one that breaks down on the low side).

On bigger regulators, we generally have reverse voltage protection and large electrolytic caps. With these tiny regulators like the S7V7F5, we want to keep them more basic and unconstrained so that people can use them in as many applications as possible, even if that means they have to add some components of their own if they want to be close to the operating limits.

Thanks for pointing those out. It looks like they could provide some meaningful protection to several of our products, so we’ll definitely try some out. Have you used them in this kind of application?